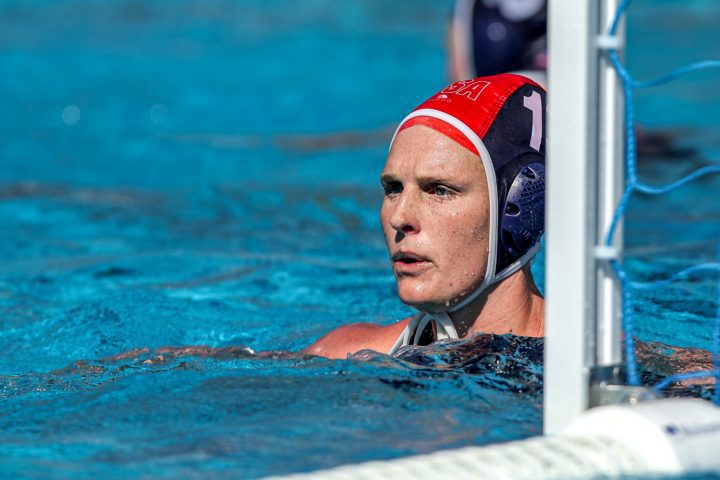 The United States are in the fourth consecutive World Championship Semi-Final after completely outclassing Italy, winning 14-6.

The game will be remembered for some outstanding goalkeeping from Amanda Longan, with Adam Krikorian opting for his substitute keeper instead of Ashleigh Johnson.

There were braces for Rachel Fattal, Steph Haralabidis, Jordan Raney and Kaleigh Gilchrist, with the latter being a contender for player of the match.

We are running out of superlatives to describe this United States team. Italy are a top, top side, but they were made to look very average today by the United States who at this point look genuinely unbeatable.

Italy were overwhelmed today. There was nothing they could do. The American defence was too strong, and that includes an amazing performance from Amanda Longan, who made a staggering 16 saves.

The United States will now play the winner of Hungary and the Netherlands for the gold medal.

Both sides had a number of chances in the opening quarter, but it was the United States who were the more clinical. While Italy were not terrible, by any means, they found themselves trailing 3-0.

The first goal came via a penalty, conceded by Claudia Marletta on Rachel Fattal. Haralabidis stepped up, and converted her 5th 5m penalty of these championships.

Italy had several shots on goal, but the surprise choice in goal for Adam Krikorian, Amanda Longan, kept out shots from Chiara Tabani, Sofia Giustini, and Valeria Palmieri.

The United States were decent going forward, and Rachel Fattal gave them their second of the game on the extra-player situation, before Kaleigh Gilchrist somehow managed to scoop the ball past Caterina Banchelli from the tightest of angles.

While the Setterosa pushed hard, their biggest chance of note was from Claudia Marletta – whose lobbed shot could only reach the cross bar.

The United States continued to shut out the Italians in the second quarter. Longan in the American goal kept out further shots from Domitilla Picozzi and Silvia Avegno.

Maddie Musselman then made her mark on the match, via the USA’s second penalty of the game. Sofia Giustini was the guilty Italian, and the United States soon had their forth goal.

Italy’s needed to find a foothold in the game to avoid being blown away, and they had a great chance when Valeria Palmieri was impeded at centre by Rachel Fattal. But Picozzi’s shot beat Longan in the goal, but could only strike the frame of the goal – adding to Carlo Silipo’s frustrations.

The Americans were showing their quality, and made it 5-0 with three minutes left in the game. Kaleigh Gilchrist’s no-look pop to the post gave Ryann Neushul the easiest of finishes.

Italy eventually had their first goal of the game, via Silvia Avegno. The newly-signed Mataro shooter turned well and finished past the nearly unbeatable Longan in this game.

However, the Italian’s celebrations were short lived, as Gilchrist netted for her first of the match with a near-side shot that Banchelli could not keep out.

With ninety-seconds to go, a well-judge timeout from Carlo Silipo helped his side make it 5-2. A silky set-play for the Italians finished with Roberta Bianconi – whose driven shot to Longan’s right pulled the Italians within three at half-time.

But in a typically ruthless and relentless fashion, the United States completely suffocated the Italians, giving no inch in defence, and punishing the Setterosa in front of goal. At the beginning of the quarter, Raney scored a really nice goal from range, driving the ball home to Laura Teani’s left.

Minutes later, Fattal grabbed a goal on the post that VAR adjudged to have fully crossed the line.

The play that epitomised the nature of the game was when Claudia Marletta had her shot well blocked by Maddie Musselman. Within twenty-seconds, Musselman provided a tasty assist for Steffens, who made it 9-2 with a simple central finish on 2m.

Giuditta Galardi’s breath-taking backhand attempted to rejuvenate the Italians, but a Denise Mammolito score on the left-wing put the USA into double figures at the end of the third.

Into the last, Jordan Raney added her second, and her team’s eleventh goal of the game, with a sniper shot into the top left corner of Teani’s goal. Tara Prentice scored a impressive goal from centre to take her side to a dozen.

Italy were not without chances. Giustini, Emmolo, and Picozzi all had shots saved quite superbly from Amanda Longan, who was all but unbeatable today. But eventually Longan was outmatched, as a Silvia Avegno shot beat the American for pace, before Sofia Giustini’s shot on the wing hit the post, and then Longan, before creeping in to make it 13-5.

Robert Bianconi netted her seventh goal of the tournament to give Italy their sixth of the match.

Maggie Steffens (United States) – “This game was really fun, for me I love playing in Hungary, it is truly the Mecca of water polo. I was really blessed to play at UVSE a few years ago. We are really grateful we got to play here, Amanda really stepped up for us. Italy are one of the best in the world so we are excited for whoever we play in the final”.

Adam Krikorian (United States) – “These moments are precious, it doesn’t matter how many times it happens, you still need to celebrate them – I know I’m not the best at celebrating them. I am so incredibly proud of our team, and our defence. I am the luckiest coach in the world, I truly believe we have two of the best goalkeepers in the world, no-one really knows about Amanda, but she’s damn good, and you obviously saw that on display. It doesn’t matter who we play next, its a championship final, we will be excited for either way. ”