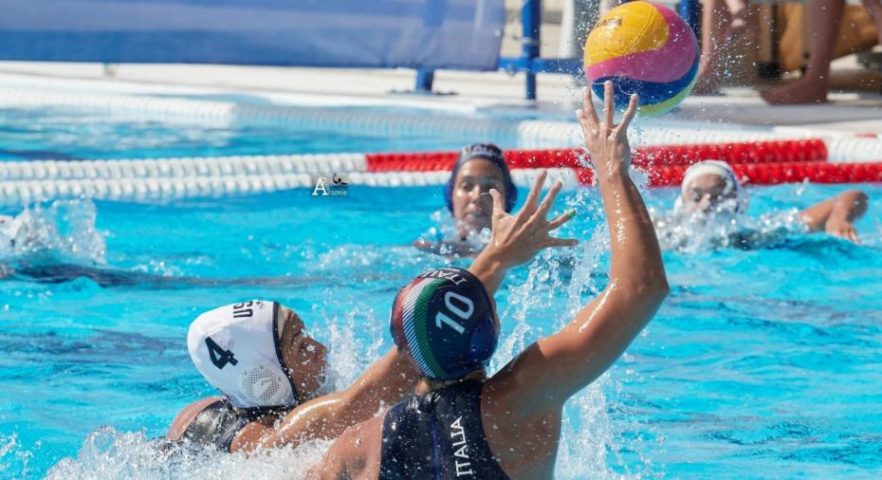 At the halfway point of World League Super Finals in Tenerife, the group stage has concluded, and the four semi finalists have been determined.

The United States, the Netherlands, Spain and Hungary are all in contention for a medal in Tenerife.

In the first of the afternoon games, the United States were pushed all the way by Italy, but eventually ran out as 11-10 winners against the Setterosa.  After coming from behind in the last period, Adam Krikorian’s Team USA are now into the semi-finals, undefeated in their previous three games, where they will face Hungary in a re-run of the World Championship final from Budapest.

In the last game of the day, Spain secured a comfortable 12-5 result against the Stingers. The reigning European Champions were the better team, and were well-worth the seven goal victory; they too, like the United States, have a perfect record from the group stages.

Team USA’s opponents will now be Hungary in their semi-final, while Spain will once again clash with the Netherlands for a chance to play for a World League Gold Medal.

You can read the report of the previous games today, which involved a Canadian shoot-out victory over the Netherlands, while Attila Biro’s Hungary thrashed his old team, New Zealand

The United States have progressed top of Group A with three wins from three after a hard-fought 11-10 victory against Italy.

Team USA had to work incredibly hard against a determined Setterosa, but ultimately it was Italy’s ill-discipline in the last quarter that cost them when the game was on the line. The United States are simply too clinical, and the Italians gave them the opportunities they needed to score, which they took gratefully.

There were quality performances all around for the United States, perhaps not at the exceptionally high levels we have come to expect, but they certainly have been the best team in the group over the past three days. Neither Jenna Flynn and Emily Ausmus are showing any signs of stage-fright at the highest level; both added two more goals to their tallies. 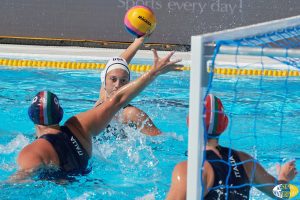 For Italy, the game might well have been over earlier had it not been for the outstanding saves by their goalkeeper Caterina Banchelli. While the result went the other way, the team pulled together and showed an awe-inspiring passion that we see so often from the Setterosa. Claudia Marletta once again scored vital goals for her side(3), while Domitilla Picozzi had another top game, netting twice.

Credit has to go to both teams for an exciting match; Italy did what so many teams have failed to do against the United States, and that is stay in the game instead of letting the Americans amass a four or five goal lead. Adam Krikorian’s team was frustrated by the Italians for much of the game, but they showed extreme cool on their power plays throughout the match, which led them to victory.

Carlo Silipo’s team will be extremely disappointed not to make the semi-finals, especially given how they competed today, while the United States will be limbering up for a clash against the Hungarians.

The United States really started the first quarter with the quality play we have come to expect, particularly in converting their extra-player opportunities. Ryan Neushul opened the scoring before Domitilla Picozzi equalised with a well-placed effort past Ashleigh Johnson.

Team USA was ruthless through their excellently worked man-up plays. Jordan Raney, as she had in the previous two games, showed confidence in taking on the shot. Two younger players, Ella Woodhead (off an excellent pass by Bayley Weber) and Emily Ausmus (a fantastic solo effort), gave the United States a 5-1 lead. 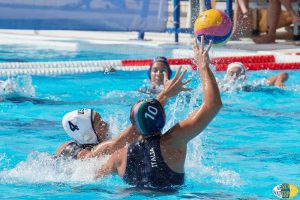 A beautiful lob from Roberta Bianconi before the end of the first quarter and a typically accurate effort from distance by Claudia Marletta gave the Setterosa a foundation to build upon throughout the remainder of the second quarter.

Italy certainly did get right back into the match. Silvia Avegno’s powerful shot past Johnson, Sofia Giustini’s lob from the right, and a perhaps fortunate flick home from Valeria Palmieri put Italy behind by just a single score at halftime (7-6).

The spirited Setterosa kept marching on, and for the first time, the United States looked quite vulnerable. Venomous shots by Dafne Bettini and Roberta Bianconi pulled the Italians level at 8-8. 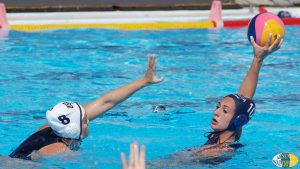 Continuing to press on, Domitilla Picozzi’s long-range effort was unstoppable, and gave Italy a well-earned 9-8 lead.

The USA pulled level via a Jenna Flynn shot from 6m that was deflected past Caterina Banchelli by Roberta Bianconi, but Italy restored their lead almost immediately from Claudia Marletta’s emphatic penalty.

But for all of Italy’s work throughout the game, they began to become ragged and ill-disciplined. Two double-exclusions from the Italians in the last four minutes put them in a vulnerable position, and Jenna Flynn and Jewel Roemer took full advantage from the left-side to seal the victory

Spain have topped Group B with a 100% win record after an impressive 12-5 display over a young Australia side.

A strong third period for the hosts (4-0) helped them to a fairly comprehensive victory against the Stingers, who couldn’t really find a way to deal with the Spanish threat on the top or at centre.

Amy Ridge had a strong start to the game with three scores inside the first half. A goal at the start of each quarter for Anni Espar set the tone for her team. 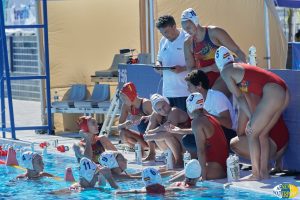 Spain will be pleased not to have conceded in the second half of the game. Miki Oca’s team will face the Netherlands tomorrow in the semi-finals; the teams last met in the semi-finals of the European Championships in Split, with Spain defeating the Dutch 10-7 on their way to the title.

The Stingers will play Canada tomorrow in their 5th-8th semi-final.

Spain controlled much of the first quarter and perhaps should have led by more than 3-2 by the end of it. Amy Ridge put away a nice shot from the right side to open the scoring, but Spain responded well with three excellent scores: Elena Ruiz fired home from the point, while Judith Forca and Anni Espar converted from either side of the arc. Vouliagmeni’s Ridge added her second of the game with 10 seconds left in the quarter. 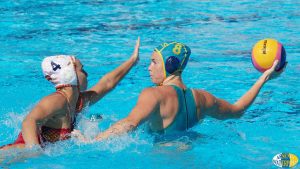 Espar had a brace with an off-the-post strike early in the second section of the game, but the Stingers were level at 4-4 thanks to exceptional strikes by Bronte Halligan and a third goal for Amy Ridge.

Two outstanding finishes from the centre forward position gave the Spanish a two-goal advantage to take into the second half. Paula Leiton flicked the ball from foot to hand exceptionally well before firing past Gabi Palm, and Maica Garcia held-off her player well before converting with a backshot (7-5). 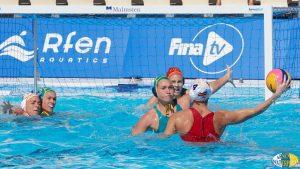 Two early scores in the third quarter put Spain firmly in command of the game. Espar’s delightful lob was backed up by another technically outstanding shot from Bea Ortiz on the right-side. A calmly taken bottom corner finish by Judith Forca took Spain to a 10-5 lead.

With the result not in doubt, the tempo of the game slowed. Australia kept battling, but couldn’t quite find a breakthrough. Irene Gonzalez’s extra-player conversion from the top was the only strike on the scoresheet.