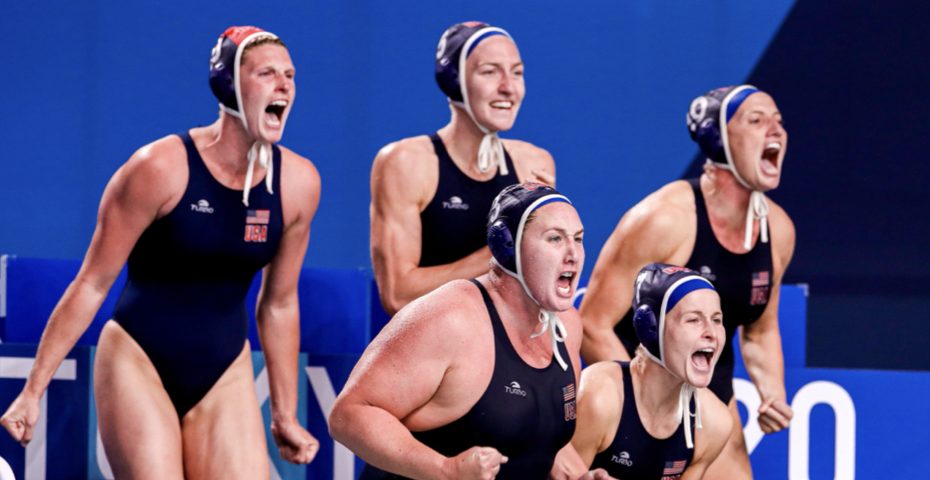 The USA have progressed to the Olympic final in Tokyo after a relentless second-half performance to defeat the ROC. The Russians had led the game in the first half, but couldn’t translate the dominance they showed in the pool onto the scoreboard.

The result, which seemed inevitable before the game, was anything but plain sailing for the Americans until the last few minutes.

The ROC were much the better side in the first half. They won the first quarter by a single goal, and would have won the second quarter by two but for two very late goals from Maddie Musselman and Melissa Seidemann.

The ROC then lost a bit of direction; missing man-up situations and giving away exclusions to a USA side that would punish them. In the USA goal, Johnson did not have her best game but did enough in the second half to prove her worth.

Ekaterina Prokofyeva was, as always, firing on all cylinders, and had it not been for some outstanding saves by Evgeniia Golovina in the Russian goal, the game may have been more like the group stage game between the two sides which ended 18-5 to the USA.

However, the USA found a way to stay in the game and took their chances to end Russian hopes of a gold medal, but the Russians still have a chance to retain their Bronze medal from five years ago.

The USA will await the game to be played between Hungary and Spain to see who will they will contest to retain their Olympic title.

The ROC took the lead with a fantastic scoop shot from Anastasia Simanovich at centre-forward, however, Rachel Fattal levelled things up with a shot at 4m from a central position. The ROC were ill-disciplined and gave away another major foul only moments later to give Maggie Steffens a carbon copy of Fattal’s goal.

Aria Fischer nearly made it three soon after, but Evgeniia Golovina got a good hand to Fischer’s lob, just before Maria Bersneva equalized for ROC to make it 2-2 with a driven shot at Ashleigh Johnson’s near post.

Maddie Musselman again tried to gain the USA a lead with a lob, however, it was saved as the ROC then took the lead from Aria Fischer’s exclusion that Evgeniya Soboleva capitalized on.

Golovina in the Russian goal then made another top save from a Steffens close-range shot from making a second pit, giving the ROC a narrow lead after the first quarter.

Trailing by a goal, the USA won the swim and got a shot off via Paige Hauschild, but Golovina was again equal to the challenge.

Alena Serzhanotva had a great opportunity to add another goal when Aleksandr Gaidukov called a timeout on the man-up, but Johnson didn’t look troubled making the save on the right-hand side.

The USA wasted their own chance from an extra-player situation as Makenzie Fischer could only hit the post from Evgeniya Ivanova’s exclusion.

An all-important fourth goal for ROC and a second for Simanovich under Johnson’s arms really put the momentum with ROC, before Anna Bersneva then grabbed her second goal to make it 5-2 to the Russians.

But the USA would always have chances, and Steph Haralabidis never looked like missing the 5m penalty given away by Elvina Karimova.

Anastasia Fedotova, however, immediately restored the ROC’s three-goal cushion with a darting cross-cage shot on the right that Ashleigh Johnson couldn’t seem to reach. 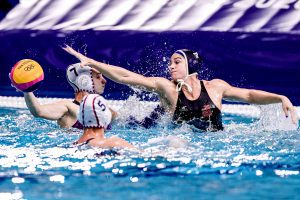 Fattal up against Serzhantova (Photo by Marcel ter Bals/Orange Pictures)

Makenzie Fischer pulled one back for the USA as Ekaterina Prokofyeva’s goal-line block was not sufficient to keep the ball out of the net. But Porkofyeva absolutely made up for it with an inspirational shot into Johnson’s top right-hand shot made it 7-4.

But the USA really were fortunate to get themselves so close to the ROC at the end of the half as Musselman netted to bring the USA within two just before the experienced Melissa Seidemann pulled her side within one goal with a vintage shot from range just on the buzzer.

Then, for the first time since the back end of the first quarter, the score was level thanks to a classy Maggie Steffen’s shot from position four.  Prokofyeva added her second of the game with a low, bouncing shot to Johnson’s right before Makenzie Fischer scored a similar goal up the other end for the Americans to put the score at 8-8.

Then the USA took the lead for the first time via Musselman who was grateful for Steffen’s assist for drawing the ROC out to give her an easy finish before Steffens turned goalscorer herself to put her side two goals ahead.

But the ROC were resilient and got a very fortunate goal from Alena Serzhantova,  whose shot went straight through the hands of Johnson. The American keeper was not at her usual best and allowed the shot to pass straight through her.

Golovina made a string of really classy saves from shots by Fischer, Steffens and Musselman to steady the ROC’s slightly rocking ship. However, she could do nothing about Maddie Musselman’s second shot from a recycled ball on an extra-player situation to give her side a two-goal lead going into the last quarter. 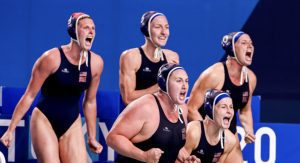 The first goal in the third quarter would surely be pivotal, and Ashleigh Johnson made a super save from Soboleva to keep her side ahead. However, Elvina Karimova’s delightful lob put the ROC back within one from a heavy foul by Alys Williams.

Maggie Steffens then was too eager and was excluded from allowing Maria Bersneva to equalize, and grab her third of the game, with a shot that Johnson probably should have kept out at the near post.

Fischer once again gave the USA a lead with a strong finish from the pit and then Alys Williams curled a shot into the far-right corner to reinstate the USA’s two-goal lead.

With three minutes to go, the ROC couldn’t find the formula they found earlier in the game to beat Ashleigh Johnson, and Maddie Musselman made it 14-11 as many of the Russians believed the ball had been turned over, giving her an easy one on one.

Musselman then secured the victory with her fifth of the game on the left-hand side with a low, drilled near-side shot.