UVSE dumped out by Kirishi, who join Olympiacos and Sabadell in the Final Four 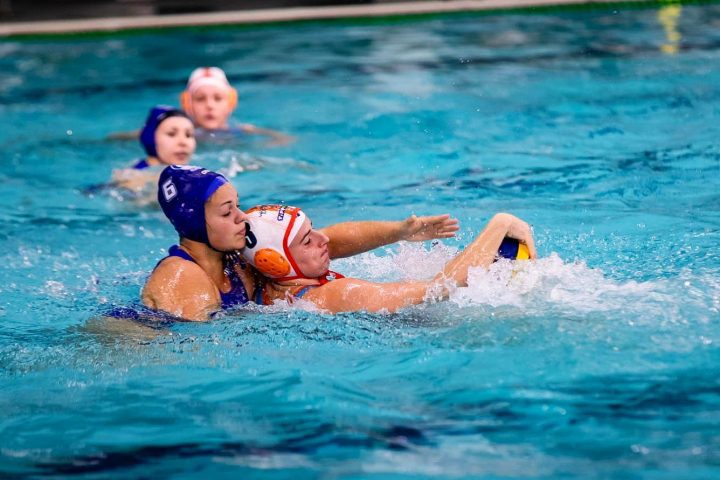 We have three out of the four Euro League semi-finalists as Olympiacos, Sabadell and KINEF Kirishi book their places in the final 4.

The two teams mentioned first, Olympiacos and Sabadell, looked very likely to make the semi’s anyway given the advantages they carried over from the first legs. Olympiacos beat Dunaujvaros well over both ties, although to Ethnikos credit, they put up fierce resistance in their away leg.

The bigger story perhaps is the fact that UVSE have been eliminated from the competition, at the hands of two time former winners, KINEF Kirishi. While this is not a huge shock, given the players KINEF have, UVSE may have quietly had an outside chance to win the competition this season.

As for the last quarter-final, the second leg between Dynamo Uralochka and Plebiscito Padova is scheduled for 3rd March in Belgrade. The now three-times rearranged fixture was initially postponed due to local COVID restrictions in Italy, before being pushed back again this week as a result of events taking place in Ukraine.

Olympiacos are a step closer to retaining their European title as they defeated a spirited Dunaujvaros in a solid away performance. While it wasn’t the best performance we have seen from the Greek champions, they were sitting on a five goal lead from the first leg, and got the job done away in the second leg.

The first quarter was tight in the second leg, with a goal each from Szilagyi and Eleftheriadou for their respective teams. But in the second, the Greeks built enough of a lead to put the tie beyond the reach of Dunaujvaros: Eleftheria Plevritou bagged a brace, while Dutch international, Brigitte Sleeking added another score, as did Vasiliki Plevritou – from the 5m penalty conceded by Greta Gurisatti.

Attila Mihok’s side worked their way past Ioanna Stamatopoulou in the Olympiacos net with finishes from Muscy, Gurisatti and Garda (2), but scores from Kyra Christmas, Maria Myriokefalitaki and Jordan Raney (2) kept the Red-Whites ticking over, and kept them on course for European glory.

For last year’s Euro League runners up, although it is a tough result to take, it was a big ask to beat Aleksandar Ciric’s outfit over two legs. Some had suggested, perhaps harshly, that the game was over after the first leg in Athens, but in truth, Olympiacos simply have a deeper squad and more quality in their ranks to call on for the big games like this. 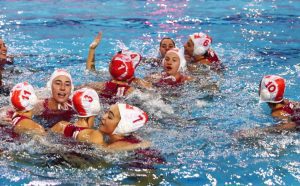 Ethnikos went down fighting in Sabadell, losing 8-6, in a contest that was closer than many expected. The five time Euro League champions from Catalonia had the luxury of a five goal advantage going into the second leg, and they ensured that their work in Athens a fortnight ago was not in vein.

Sabadell once again relied on the outstanding contribution from their top goal-scorer in Europe and in Spain, Judith Forca Ariza, who bagged a hat-trick. Maggie Steffens was also on the scoresheet three times. Ethnikos shared their goals out amongst their team; Karolina Ioannou, Eleni Elliniadi, Steph Haralabidis, Benekou and Ioulia Kontoni (2) all converted.

Sabadell will be pleased to be back in the final 4 for the first time since they last lifted the trophy, back in 2019, beating Olympiacos 13-11 to the title. Five of the players that won the competition are still at the club (Ester, Ortiz, Steffens, Garcia Godoy and Forca Ariza), and they will be eager for European success once more.

Ethnikos will feel that a better home display could have given them a real chance, especially given their display at Can Llong. The were really competitive against one of the best teams in Europe, and they have shown during this campaign that they can compete with the very best, beating Terrassa and SIS Roma on the way to the quarter-finals. For the club to be in the last eight shows progress, but they will be looking to push on for next season, if they can keep many of their young talents and big name superstars. 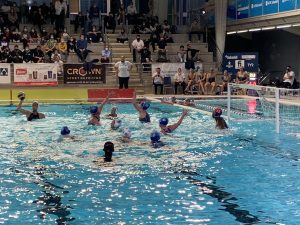 UVSE’s European adventure comes to a premature end after losing out to a really gritty KINEF Kirishi side in Budapest. For all of UVSE’s  domestic success, the biggest trophy and European glory has evaded them for yet another year.

UVSE had every chance to reach the semi-finals this year, particularly given the fact they only trailed by a single goal from the away leg. But today, UVSE’s performance dropped off in the second half, and it was about the quality of opposition, who were in fairness the better team over the two legs.

Russian clubs like KINEF are renowned for producing top young talent, but today it was their two most senior players, Ekaterina Prokofyeva, and Nadezhda Glyzina, who led on the scoresheet (3 goals each).

It’s disappointing for Marton Benczur and his side, but with the spirit of the club, and a number of young Hungarians in the squad, they’ll learn from this experience and come back stronger next year. They still have a domestic title battle to decide, and that will now be their sole focus. 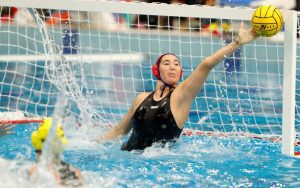