Virtual Congress on Sunday: Who will lead LEN? 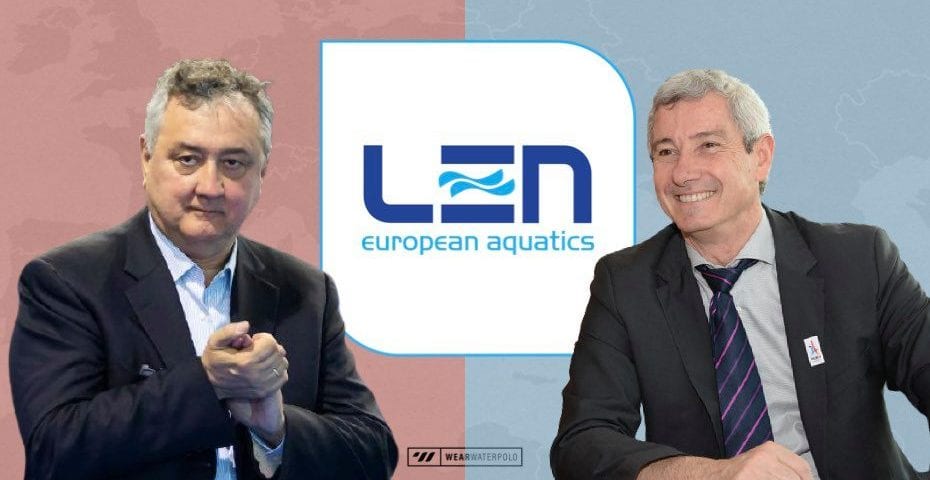 Tomorrow, the European aquatic family will decide who will be its leader until 2024.

The LEN Elective Congress will be held on Sunday, November 8. The national federations that are members of LEN will elect a new President, LEN Bureau members for the term 2020-2024, and the candidates to the FINA Bureau (2020-2025).

The Congress was supposed to take place in Budapest. But, due to the coronavirus pandemic, the LEN Bureau has decided to hold an online Congress. The elections will be conducted on the web. Special software will be used for the voting process.

The current LEN President Paolo Barelli (Italy) is looking for his third four-year term (he has been leading this organization since 2012).

The Italian’s opponent will be Gilles Sezionale (France). He is the President of the French Swimming Federation (since 2017).

Paolo Barelli hasn’t officially started his election campaign through public media. In the last few weeks, he has had a lot of interviews with Italian media. But, the topics of the talks were problems of aquatic sports in Italy caused by the pandemic. He hasn’t spoken on the LEN elections.

Early in September, he was confirmed as the Italian Swimming Federation (FIN) president for a sixth term, until 2024. On that occasion, he mentioned LEN:

“We are entrusted to continue our hard work for FIN and I’m ready to do the same in LEN in order to offer the maximum support for the aquatic family in these extraordinary times. I’m sure we can overcome all difficulties we face now in this critical period and can get back to our normal life soon, stronger than ever.”

Barelli was a swimmer and a two-time Olympian (1972 and 1976). He won a bronze medal at the 1975 FINA World Championship. He has been the President of the Italian Swimming Federation since 2000. In 2012, he was elected for LEN President. He was head of the Italian Swimming Federation at the Olympic Games in Seoul 1988, Barcelona 1992, Atlanta 1996, and Athens 2004. Since 2017, he has been the FINA Vice-president. Three years ago, Barelli was a candidate for FINA President. He had an intensive campaign in which he criticized FINA Leadership, but he wasn’t elected. Julio Maglione (Uruguay), who serves as FINA President since 2009, was re-elected.

Gilles Sezionale confirmed his candidacy to the public and announced his program for the presidency last week. He presented his plan via a dedicated website (transparencyforlen.eu).

“I want to promote a new policy that is much more participatory and transparent. My project is to restore confidence and develop my sports.”, Sezionale said.

Explaining reasons and motives for his candidacy, Sezionale underlines:

“In these difficult times, it is essential to have honest and reliable leaders who work in the public interest. Today, the current president of the LEN is facing embezzlement charges. He is also the subject of two judicial inquiries. While I defend the presumption of innocence with the utmost vigour, the answers given by Paolo Barelli are far from convincing and his approach lacks transparency. I have repeatedly asked for tangible evidence that would have cleared any doubt towards him. The answers provided compelled me to act. As a member of the LEN Board, I consider the reputation of the institution to be at stake. I want to protect European swimming from a possible scandal. My candidacy is the defence of clean swimming.”

The credibility of LEN is at risk, Sezionale says.

“The LEN is in danger. We are in an unprecedented crisis. With the threats to the current president, the union is under threat. Today I represent a credible alternative to keep Europe united. My candidacy aims to guarantee unity on the subject of defending strong values. My only goal is to know the truth. To date, no one has bothered to answer me. The LEN deserves better than these practices from a bygone age.”

Sezionale’s program is based on 12 objectives, including transparency and ethic as key words for LEN action; creation of an independent ethic committee; reducing travels and favor more meeting through videoconference system; increasing the number of athletes in all countries that are affiliated LEN members; promoting the rotation of European events and their organizations in smaller countries, etc.

The new LEN Bureau will also be elected on Sunday. The Bureau consists of: the President, up to five Vice Presidents (preferably from different areas in Europe), the General Secretary, the Treasurer, up to nine further members, and the Chairman of the Athletes Committee without a vote.

The LEN Bureau appoints the Technical Committees for each of the aquatic sports. For each Committee the Bureau may appoint a Bureau member who shall ensure necessary communication between the Bureau and the Committee (Bureau Liaison)

Water polo liaisons in the current LEN Bureau are Fernando Carpena Perez (Spain), one of the Vice Presidents, and Aleksandar Sostar (Serbia).

National federations of 52 countries are members of LEN. Each country has a maximum of two delegates with two votes per country (a total of 104 votes).

The previous Elective Congress was held in London in 2012. For the first time ever, all 52 member federations were present at the LEN Congress.