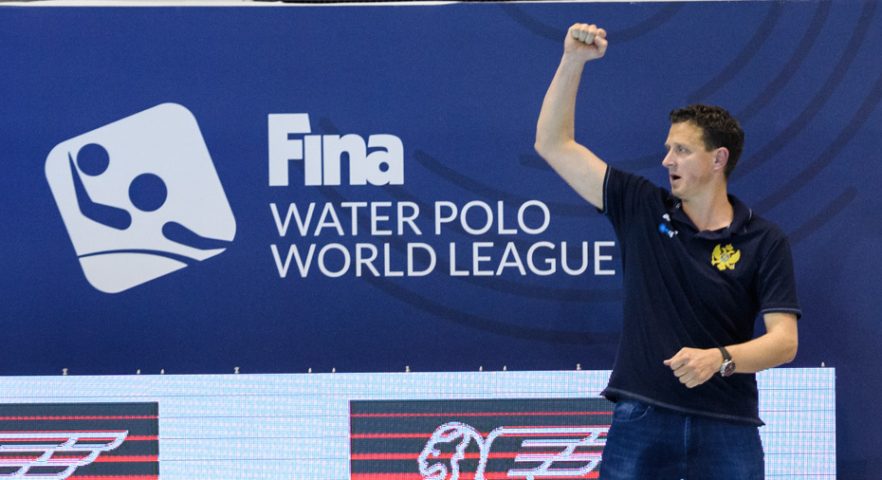 The list of the participating teams in the Men’s World League Super Final in Strasbourg (July 22 – 27) was finalized the last week.

Until recently, it seemed that the teams would battle for a vacant throne. Montenegro, the winner of the previous edition, didn’t qualify through the European qualifications. It stopped just in front of the F8 doors – in 4th place in Europe.

However, after Brazil withdrew, Montenegro was invited to replace South Americans. It was finally confirmed that the reigning champion would play in Strasbourg only a week ago.

We spoke to Montenegro head coach Vladimir Gojkovic about his team’s quick preparations for Strasbourg.

Montenegro finished in 8th place at the World Championships in Budapest. But, a young Montenegrin team (the youngest team in the tournament) wasn’t far from the semifinals. It played a few very good games against the favorites. Only a goal separated Spain and Montenegro at the end of their encounter in the quarterfinals.

“All in all, we can be satisfied with the World Championships. Montenegro played with a significantly rejuvenated team and considering that fact, I think that was our real position. Our goal was a spot among the top 8 teams and we achieved that. Of course, you feel sad when you lose in such a balanced game in the quarterfinals like the match against Spain was. But, on the other side, we are happy because we played a very good match against Spain, which showed that it was the best team in the world. When we summarize all we showed in Budapest, we can conclude that we have to work a lot to come close to the best teams in the world”, Gojkovic said in an interview with Total Waterpolo.

Almost all head coaches of the national water polo teams have changed their plans a few times since the beginning of the year – first because of the postponement of the Fukuoka World Championships, then after the decision on the Budapest WCH. The Montenegrins had to change their plans for the third time after the invitation for the World League F8 came.

“Yes, we had to change the plans again. Earlier, we confirmed participation in a tournament in Greece. So that we will play with one team there. Besides, we have some problems with injuries. Considering all the facts, I can’t say that we have adequately prepared for Strasbourg, because the players needed a rest after the World Championships. The European Championships, is our primary goal. However, I think we have a team that can play well in the Super Final.”

Like most European teams, the Montenegrins won’t come to Strasbourg with the same team as Budapest (the full roster at the end of the article).

“The process of rejuvenating the national teams is normal in the post-Olympic year. But, this time, the Olympic cycle is shorter and we have to work faster than usual. The team in Strasbourg will differ from the squad that played in Budapest. After the World League, we will clearly see what we are able for and what we have. Then, we can start composing a team for the European Championships.”

Montenegro arrives in Strasbourg as the reigning World League champion. Still,  the Montenegrins aren’t pressured by the burden of the favorite because the team has changed a lot since the 2021 World League Super Final in Tbilisi, and there was not much time for preparations.

However, they don’t carry the white flag.

“Of course, we can’t feel like the favorites at the upcoming tournament, But I believe in the players that will compete in Strasbourg. I think we have a good team that can provide quality matches. Our approach to each game will be the same – we will try to defeat each rival.”

Gojkovic said it wasn’t easy to single out the favorites for the gold medal at the Final Eight.

“The European teams have changed their rosters since the World Championships. Many will arrive without some of the key players. On the other side, the USA (which will finish its season with the World League – Ed) will come with its best players.  France, as the home team, is excellently prepared for the tournament. Besides, they have prepared for the World League longer than others since they didn’t play in Budapest. So, it’s difficult to predict the outcome of the tournament”.

*Played at the World Championships