VLV asks: “Was the Budapest bubble punctured?”, Vari answers: “There was no risk” 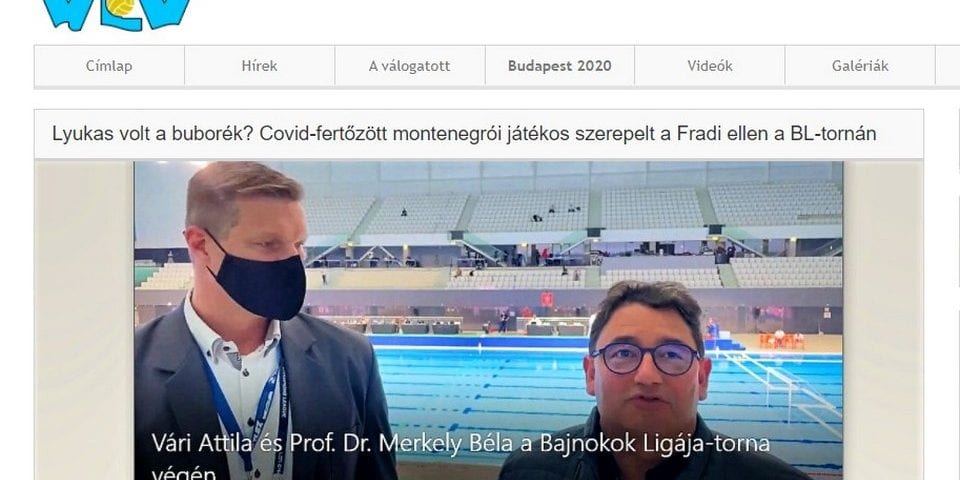 The Champions League was continued last week with the second “bubble” tournaments.

One piece of information that came on the last day of the Budapest tournament worried many. Petar Tesanovic, Jadran Herceg Novi’s goalkeeper, was tested positive for coronavirus, and he didn’t play in the last match against Waspo Hannover, held on Friday.

In the first article, VLV analyzed the situation and published that the infected player had been tested positive on Thursday. Still, he played against Ferencvaros that evening because the test results arrived after the match. This VLV’s information was confirmed by six sources.

VLV writes that the Hungarian Water Polo Association published a video after the tournament. Attila Vari, the president of the Hungarian Water Polo Association, and dr Bela Merkely, the rector of Semmelweis University, responsible for the health insurance of the bubble tournament in the Danube Arena, summed up the experience of the week in the four-minute video.
Attila Vari called the tournament an important part of the Olympic preparations and said they had gained a lot of experience, as this was their tenth such “bubble event”.

“From a health point of view, our work filtered out a positive case (from a non – Hungarian team) within the bubble here, of course, as usual, thus ensuring that this otherwise really dangerous virus could not spread among the players.

The bubble is the only way to see this level of team sports, at least in front of the TV screen. We already have a lot of experience in this “bubble”, the point of which is to extend the kind of screening that extends not only to players but indeed to all service staff, which ultimately ensures that players can play in safe conditions.

According to the information by several sources, the Hungarian website found out which protection measures were implemented:

-During the tournament – as Bela Merkely and Attila Vari pointed out – the organizers acted on the experience of previous similar events and following the requirements of the very strict LEN protocol.

-Before the event, everyone who was in the pool area during the competitions had to produce two negative PCR tests. The teams and all other participants settled into a hotel with two negative tests. Each player was accommodated in a single room. The teams were given rooms on different floors.

-The meal was buffet style, but the players didn’t take the food by themselves. The hotel staff members were bringing the meals.
Each team had a bus at the disposal for training and matches. Longer walks, sightseeing, other outdoor programs were not allowed for anyone. A so-called Covid Marshall supervised the hotel guests.

VLV found out that one of the samples taken on Thursday morning (before breakfast) turned out late at night to give a positive result suggesting the presence of Covid-19. The affected Jadran player had previously produced negative tests in both test modes. Moreover, his quick test before the evening match was negative. This made him possible to get into the water against Ferencvaros at 19:00.

The results of Thursday morning’s sampling arrived late in the evening. The Montenegrin team faced the situation on Friday morning. The person concerned is Petar Tesanovic, a talented goalkeeper (which was later confirmed by Jadran and LEN). He did not leave his room after the positive test result, and he is still in Budapest, in quarantine, VLV published.

The news, of course, spread quickly in the hotel. All the players from the two teams involved (Ferencaros and Jadran) underwent PCR tests again, and further rapid tests were carried out. Fortunately, the result was negative for everyone. Tesanovic, of course, did not play on Friday evening.

VLV emphasized that the case had raised many questions, no matter how obvious it is that the organizers have taken every possible action: It is not known whether the Montenegrin boy had previously carried the virus in his body, and perhaps the latency lasted longer than usual, or the negative tests were examples of the “percentage of error” in the test, or he got the infection from someone in the bubble. If the latter happened, it raises further, unpleasant questions. Nor is it understandable how it is possible that the results of the PCR samples taken in the morning do not arrive before 7 pm, we know that this was a “normal session”. And if the quick test is so unreliable, how to base it, etc., VLV asked.

VLV notes that over time, not only will the virus mutate, attack again and again, but the conditions for fighting against Covid will also continually improve (vaccine is one of the examples of the fighting)

Vari responded to VLV’s request, and the website published the answer in the second article regarding the organization of the tournament in Budapest.

We selected questions and answers relevant to this case.

According to Vari, the Montenegrin with a positive Covid test  “posed no risk”.

– How does the Hungarian Water Polo Federation evaluate the two CHL tournaments that have taken place in Budapest so far from a water polo professional point of view?

“Due to the difficulties caused by the coronavirus epidemic, it is extremely important to ensure the functioning of the sport as well as the completion of the started tournaments. It is also essential to hold international events organized in Hungary because, in the current pandemic situation, the international competition of Hungarian athletes can be realized in the domestic environment in the safest way and with the greatest professional efficiency. Our athletes must follow the well-known domestic protocol in the face of possible foreign events; in addition to acclimatization, it is not necessary to master and adapt to the COVID protocol of another country. International events can also be one of the foundations for successful preparations in Tokyo.”

Vari said that MVLSZ had received only positive feedback from LEN, the teams, and the officials. All are satisfied with the current conditions.

– What new organizing experiences have the two tournaments brought so far?

“Everyone is learning from the experience of the Covid situation and trying to get the best out of it. There has been a seemingly small change in the distribution of media stands, for example. Adherence to domestic and international protocols caused by the coronavirus epidemic will certainly strengthen the range of new experiences. Protecting the health of athletes, staff members, and service personnel is the most important. In terms of organizational tasks, measures related to the coronavirus epidemic have become essential and unavoidable. In addition to the rules of Semmelweis University, the requirements of the issued LEN protocol must be met during the organization. We are grateful to the participating teams for disciplined adherence to the strict protocol of the event.”

– As it turned out, one Jadran player, who has been infected, played against Ferencvaros. How could this happen? Is there a single error here, or is the system being operated bad, not secure? What action has been taken following the incident, and will any changes to the current LEN protocol be initiated in the longer term?

“Filtering was done according to LEN and organizer protocol – also during the event. The Montenegrin player arrived with a documented negative test. After a positive test, he was isolated by health professionals at Semmelweis University following official regulations. There was no risk to the incident. The positive case was isolated; there was no omission in the protocol.”

One of the questions was related to vaccinating athletes. Vari said that the Federation doesn’t organize the vaccination of athletes, but the Hungarian Olympic Committee. 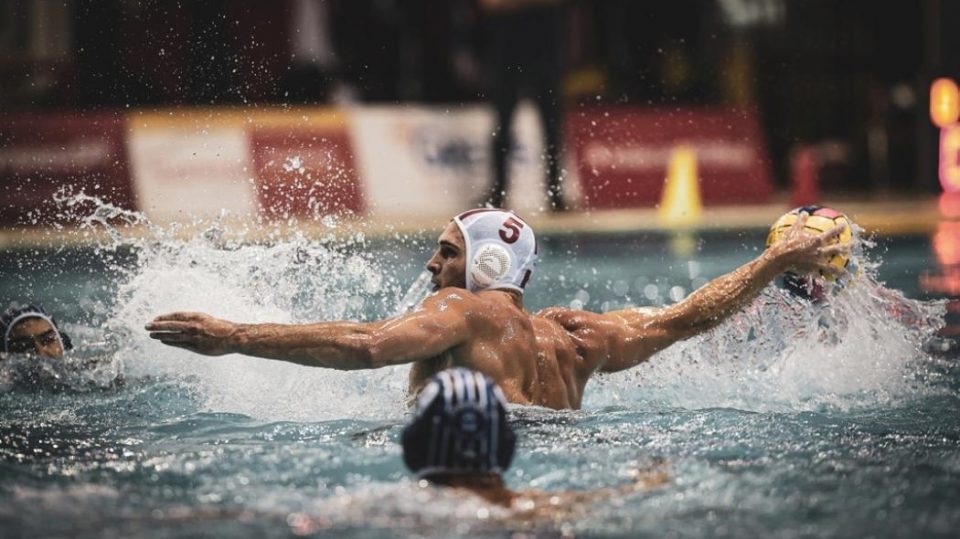 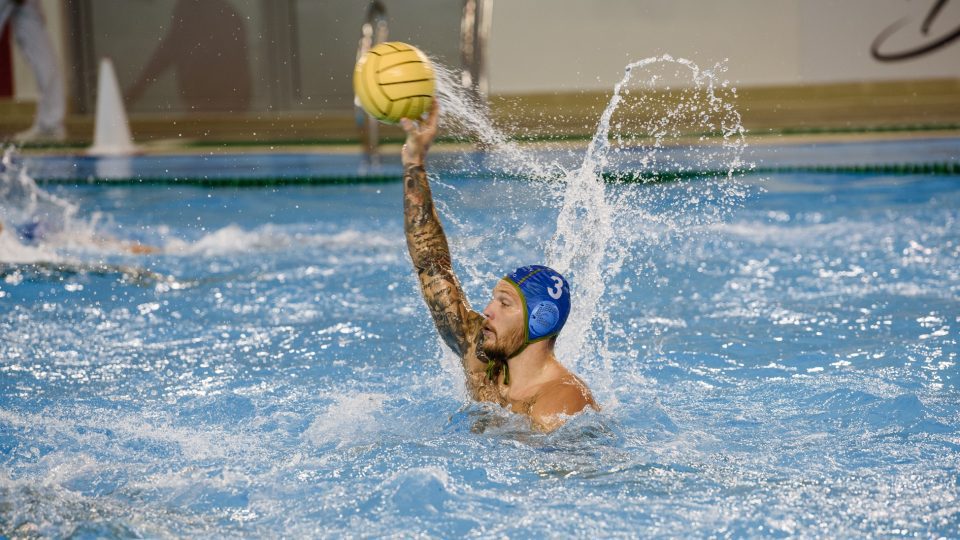