Hannover defeated Spandau 04 – 11:9 In the fourth match of the playoffs finals,  and won the trophy with a 3:1 total score in the series.

Waspo became the national champion for the second time in the club’s history. The new German champion won its first title two years ago. But, Waspo doesn’t have a long history. The club was founded in 2012, after the fusion of the clubs SV Wasserfreunde 1898 Hannover and Wassersport Hannover-Linden. SV Wasserfreunde 1898 Hannover won 8 titles in the German League (the last one in 1948). Hannover-Linden was the national champion once (1993).

Hannover won the first two games in the final series, but it missed the first “match ball” for the title, that it had in Berlin on Sunday.

Today, Waspo played excellently in the outdoor pool in Hannover. It broke the big rival in the 2nd and 3rd quarters. The series of four goals in a row in the middle of the match proved vital for Hannover’s win.

The first two quarters were balanced. After a 2:2 first quarter, Petar Muslim gave Hannover a 3:2 lead. But, shortly after, Strelezkij equalized (3:3). The hosts built a 2-goal lead two times (5:3 and 6:4), but Spandau halved the distance on both occasions. Fourteen seconds before the end of this period, Hannover re-earned a 2-goal advantage (Nagaev netted for 7:5).

The third quarter was crucial for the outcome. Hannover’s defense was superb in the opening minutes of the second half of the match. On the other side, Hannover produced a 3:0 series. Hannover captain Aleksandar Radovic scored two goals, his fellow countryman Darko Brguljan added one, and the hosts went 10:5 up two and a half minutes before the last break. By the end of the third period, Lucas Gielen scored for 6:10.

Early in the fourth quarter, Hannover center-forward scored a nice goal for a new 5-goal margin (11:6). Spandau started coming back when it was too late. The visitors scored three unanswered goals in the last three and a half minutes. Still, Hannover’s win wasn’t in danger.

All matches of the final series

Two national titles for Marko Macan in one season 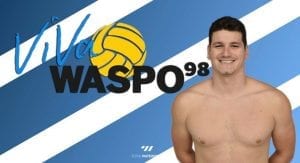 He won two national championships in two countries in a span of two and a half months.

On July 25, Macan won the Croatian Championship as a player of Jug Dubrovnik. Then, he moved to Waspo Hannover. The German League restarted on August 22. Macan joined Waspo in the semifinals and contributed to the second national title of his new club. Today, he scored one goal.