Weekend in Serbia and Croatia packed with derby games

Another action-packed weekend has finished in the ex-Yu countries. Several derby games were played in the leagues of Croatia and Serbia. Still, there were no big thrillers – favorites, Jug, Jadran Split, Novi Beograd and Radnicki, collected points.

The derbies of the Croatian League Round 4 were played in Dalmatia – in Dubrovnik and Sibenik. Champions League clubs recorded wins in both games.

Jug hosted Mladost in Dubrovnik. These two clubs met several times in the Croatian finals in the past few years and fought fierce battles. Last season, Mladost beat Jug both in the national Cup and the playoffs final. However, a lot of things have changed since the last final. Both clubs rejuvenated their teams, but Jug composed a very good squad. Jug is much stronger than Mladost this season, and it proved that in the derby.

The Dubrovnik-based side kept momentum gained in the Champions League match against Hannover (13:7) and opened the game with a 7:1 blast.  Mladost’s Marin Dasic scored three consecutive goals in the last three minutes of the first half (4:7), but Jug dominated in the third quarter and secured the win before the final eight minutes. Hrvoje Benic and Marin Tomasovic were the best scorers in the winning team (three goals each). Loren Fatovic and Alex Papanastasiou added two each. Marin Dasic scored four goals for Mladost.

The other derby offered more excitement. Jadran Split visited Sibenik to face Solaris. Jadran earned an early 3:0 lead and maintained the difference until the first break. Solaris did its best to come back and managed to cut the deficit to one goal twice (6:7, 7:8). But, after Solaris’ seventh goal, Jadran scored four for a safe 12:7 lead in the middle of the last quarter. Konstantin Kharkov led the visitors with four goals. Jerko Marinic Kragic added three

Mornar defeated POSK in the Split derby – 15:9. Duje Akrap was a man who made a difference. He scored six goals.

Novi Beograd continued its series of big wins, downing seven-time European champion Partizan 20:6. Novi Beograd was a heavy favorite in this match, but Partizan has good players and champions on its roster, too. Therefore, few expected such a big margin at the end of the encounter.

The opening minutes determined the rest of the encounter. Partizan, supported by many fans in the stands, equalized just once – 1:1. After that, Novi Beograd scored eight unanswered goals for a 9:1 lead. At halftime, it stood 10:2. Partizan played better in the third period. It seemed that it would avoid a defeat with a double-digit margin, but Novi Beograd was merciless in the final eight minutes. Almost all field players of Novi Beograd got on the scoresheet. Strahinja Rasovic scored four goals, Angelos Vlachopoulos 3, etc.

“The final score doesn’t mirror a difference in quality between Partizan and Novi Beograd. Partizan is one of the contenders for trophies in domestic competitions and the Regional League. We will watch a much better and stronger Partizan in this season. Partizan and Novi Beograd are in different rhythms at the moment. Before this game, we played several strong matches in a row, while Partizan hasn’t had so many challenges since the start of the season. Besides, two Partizan’s players missed the game. As for Novi Beograd, I am really satisfied with our play. The offense worked well, we improved the defense.”

Before the game, Partizan organized a ceremony. Players and coaches who won medals with national teams at major competitions this year and were present at the match were awarded by the home club with special plaques. Among the awarded were Novi Beograd’s foreigners Angelos Vlachopoulos (Olympic silver with Greece) and Miroslav Perkovic (bronze at the World U20 Championship with Montenegro).

“I thank Partizan for this gesture. It’s nice to remind on and mark successes”, Vujasinovic said. He received the award as an assistant coach of the Serbian Olympic team.

Radnicki Kragujevac visited Belgrade for the second time this week. On Tuesday, the Serbian champions lost to Novi Beograd in the Champions League. The second arrival was triumphant – they beat Crvena Zvezda, which started the Champions League with a victory over Spandau on Wednesday. The first quarter belonged to the visitors, but Crvena Zvezda turned around a one-goal deficit to a 3:2 lead early in the second quarter. However, Radnicki answered with five goals in a row and went to 7:3 in the middle of the third. The hosts halved the distance in the fourth quarter (7:9 and 8:10), but Radnicki didn’t let them go further. Crvena Zvezda’s Gavril Subotic was the leading scorer (4 goals). Milos Cuk, Filip Jankovic, and Nikola Lukic contributed to Radnicki’s win with two goals each. 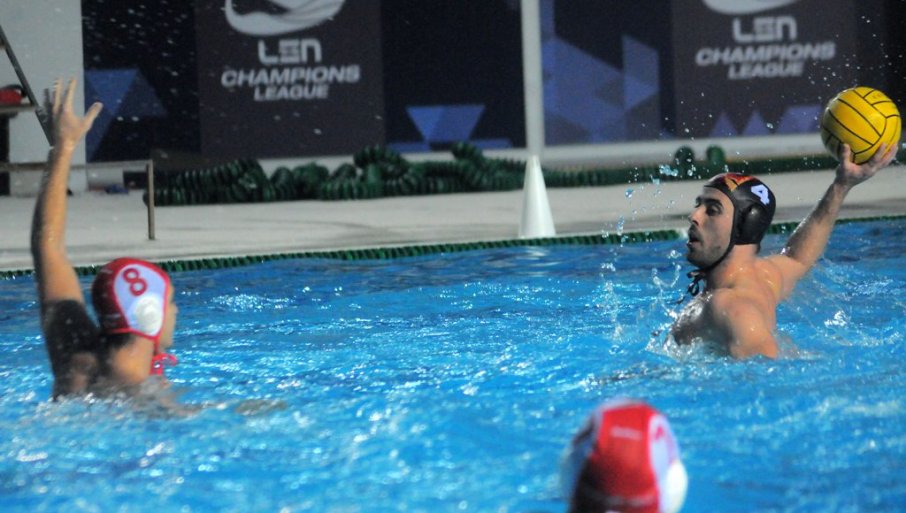 Sabac defeated Vojvodina in one of several important games in the 5th round. The former champion started well. Sabac led 5:1 at the first break, but Vojvodina equalized at the beginning of the third period (6:6 and 7:7). Sabac retook control and recorded a 15:10 win. Ognjen Vasovic led Sabac with five goals, Dragoljub Rogac scored four for Vojvodina.

More news about water polo in Croatia, Serbia, and Montenegro