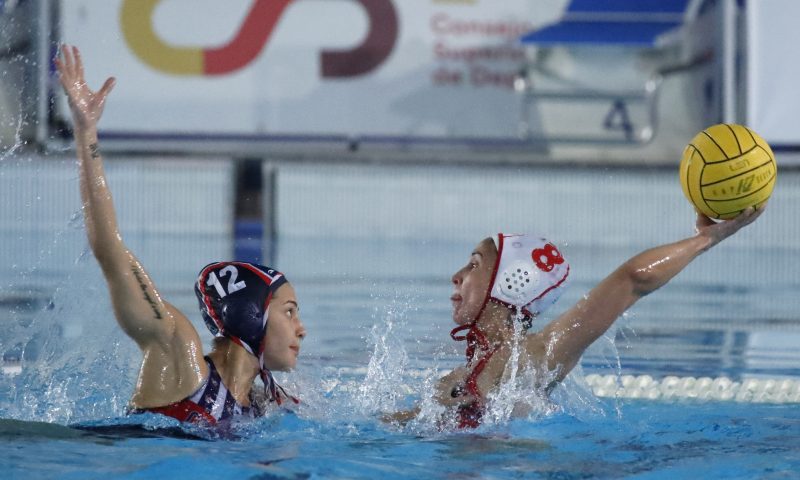 In a best of three format, the first of at least two matches between the two sides takes place tomorrow at Joan Serra at 18:00pm CET. In the other Semi-Final later this month, Sabadell will take on Mediterrani in a 1st against 4th battle.

While Terrassa finished six points adrift of Dani Ballart’s Mataro side in the regular season, the teams are more evenly matched than the league table suggests.

Back when the two sides met in late October, only a goal 14 seconds from time from Anna Gual separated the two sides. That dramatic late winner gave Mataro a 7-6 victory, on a day where Simone Van de Kraats was pivotal to Mataro, securing a hat-trick.

However, nothing could separate the two teams in January, when they shared the points in a hugely entertaining 7-7 tie. In fact, Mataro were lucky to even get a point in that game, as another late goal this time from Silvia Morell (who netted four in that match), meant Terrassa left Mataro disappointed.

As the two previous encounters between the two teams clearly shows, the games have been extremely tight. Mataro have been grateful for two late goals this season to just about have the edge over Terrassa, however Xavi Perez may feel its about time his side did the late damage.

How the teams stack up…

There is no shortage of quality in the ranks of both sides.

Mataro, who did some big business in the Summer, can call upon the services of clinical strikers such as Simone Van de Kraats, Anna Espar and Bella Markoch. With the strength in pit of Vivian Sevenich and Anna Timofeeva, and the experience of Marta Bach, the side from the Maresme coast are a classy outfit.

Since winning the league for the first time in 2019/20, Mataro are still not the finished article, and have a way to go in their development to becoming a dominant force in Spanish and European water polo. However, they have the squad to win any given game on any given day – which they will need against a Terrassa side that have frustrated them in recent times.

On the subject of frustrating Terrassa, they have comfortably been a top 4 team this season. However, aside from the games against Mataro, they never really looked like being more than a top 4 team. In spells, they have looked strong enough to mount a challenge to the likes of Mataro and Sabadell, but it hasn’t been sustained consistently.

Like their opponents, Terrassa also possess some really talented and seasoned players. The obvious name that stands out is Bea Ortiz. The former Sabadell and Rubi driver is unplayable on her day. Her all round game is fantastic and there is no doubt she is central to how Terrassa play – which is why it is a concern that some reports are linking her to a return to Sabadell in the summer. However, while she is still in contract and representing Terrassa, her focus will very be on beating Mataro, a side she has haunted for years.

Also on the roster for Xavi Perez is a team with strong players in the important positions. Pili Pena remains a stalwart at the tender age of 36, alongside younger Spanish talent like Paula Leiton, Judith Panicello, and Sandra Domene in between the sticks. Nina Ten Broek is enjoying her first taste of Spanish water polo – the Dutch international is growing her game well in Spain, and is becoming a bigger part of her national team coach’s plans.