Women’s European Championships Preview Group A: Three of the best to jostle for favourable seeding 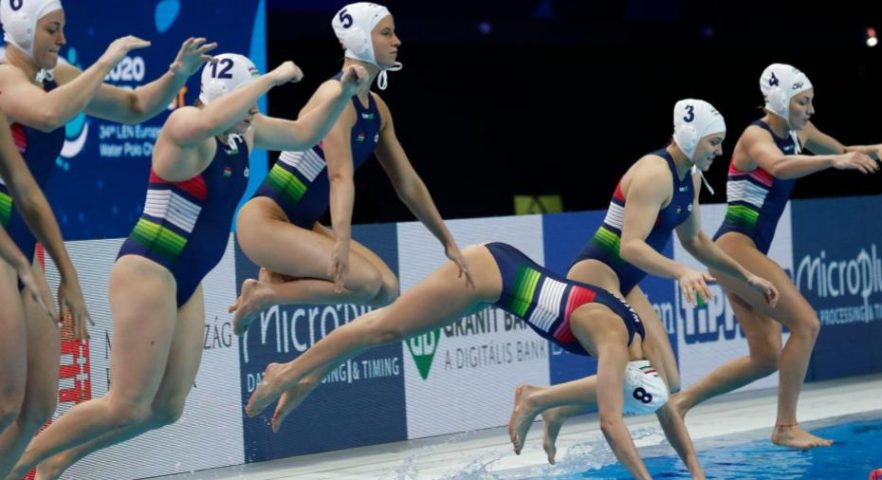 The wait is nearly over as the 35th European water polo Championships are finally here.

With the nineteenth edition of women’s tournament set to begin tomorrow (27th August), there is a huge amount of excitement about what is to come in Split – the summer’s second major international tournament in Europe.

There will be twelve teams competing in Split, which is located on the stunning Dalmatian coast, but only three nations can claim a spot on the coveted podium after eight highly-anticipated matchdays.

There isn’t much to separate the favourites for the competition; the reigning champions Spain look a good bet to retain their Gold medal from 2020, but they will have to fend off World Championship Runners-up Hungary, as well as the competition’s historically most successful nations: the Netherlands and Italy, as well as an outside push from Greece.

Emerging behind the ‘big five’ are the chasing pack, comprised of the likes of France, Israel, Serbia and perhaps Germany. Propping up the competition are; the hosts Croatia, Russia’s replacements, Slovakia, and tournament debutants Romania.

The twelve teams will be divided into two groups of six. Following a round robin format, each nation will play every team in their group once. Then, the top four teams from each group, based on their seedings, will play each other in the quarter-finals, and the semi-finals and the finals thereafter. 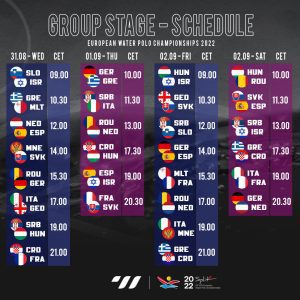 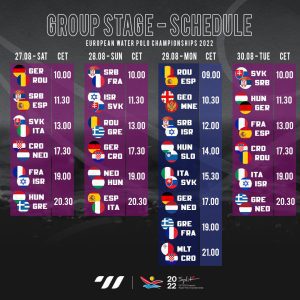 Three teams are sure to qualify from Group A, although the order in which they rank will certainly be interesting. Hungary beat the Netherlands to the Bronze medal match, 10-8, back in 2020, and so the Dutch will want revenge when they meet on Saturday evening.

Behind those two, Greece will also be a sure bet to qualify from the group. Many will expect Greece to take the third spot in the group, but they did cause a surprise in Budapest by topping Group D in Szeged, pushing Spain down into second, so they can always lay a trap in the Group stage.

One might expect the fourth and final spot in the group to be a straight shootout between Germany and Croatia, with the Germans probably edging it with their superior experience, but the home advantage might just throw a spanner in the works. There is no pressure on Romania, as they make their first ever European Championships appearance, kicking off against Germany.

Despite the array of talent in the Greece squad, they do not come into Split as medal favourites, far less as gold medal contenders. A succession of disappointing results at recent international tournaments, and a sustained absence from the Olympic games, has lowered expectations for one of the continent’s great water polo nations, a factor that may actually benefit the team in Split.

As Alexia Kammenou alluded to in our recent interview, while her squad is young and the team needs to be patient, the hope is that eventually her team will click. Only time will tell if that will be at these European Championships.

Many of Greece’s quality players play for the two Piraeus based clubs, Olympiacos and Ethnikos, who ruled supreme in the LEN Euro League and the LEN Trophy last season. Additionally, the summer has thus far been very successful for the younger Greek teams, with successes at the U19 European Championships and the U18 World Championships. With a few additions from those ranks, perhaps the winning streak can continue for Greece.

But the stats are not on the side of the Greeks. Greece has never won a gold medal at European Championships, despite making the final three times, most recently at Barcelona in 2018. Additionally, they have only won two of the last nine quarterfinals they have played in. You get the feeling that if Greece is to make Split a success, they will have to do well in the group stage, which may be a tough ask with Hungary and the Netherlands lurking. 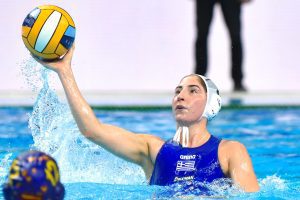 Whilst the pain of the World Championships Final is still in the back of Attila Biro’s mind, his Hungary team arrive in Split as one of the teams to beat. The three time European Championship gold medallists have shown many positive signs in their recent friendly games at the Sardinia Cup and against Australia in Budapest.

The team is without two big names; Rita Keszthelyi, who did not feature in any of the preparations for Split, and Natasa Rybanska – who pulled out of the squad on Tuesday evening due to a serious and persistent shoulder injury. Both will be sorely missed, and no other team in Split has lost that calibre of quality from their rosters. It will be fascinating to see how the team fares without those players.

But the strength and depth of the Hungarian squad is still impressive all over the pool; from their keeper, perimeter players and their centres. The few new additions to the team are relatively experienced, and will slot into the picture nicely.

Statistically, if there is one team to put money on to take home a medal in Split, it’s Hungary. They have won more medals than any other team in the history of the games (3 gold, 5 silver, 6 bronze), and it wouldn’t be a surprise to see them add a fourth Gold to their collection. Another confidence boost for the Hungarians is the fact that they have only failed to reach the semi-finals twice (1997, Seville & 2010, Zagreb), although one of those times was in a Croatian city – which might well be a bad omen. 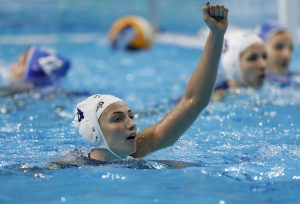 The Netherlands are the joint most successful team at the European Championships, having won the competition a record-equalling five times. Coming into Split, you wouldn’t look past them making it six.

The team have been on an upwards trajectory since a disappointing showing in Tokyo, and now look far more complete as a team. The depth of their squad is far healthier, and their ability to hold off their opponents, particularly physically, has improved massively.

Eva Doudesis, the Dutch head coach, spoke to us about the pressure on his team, and described it as a privilege. For all the positivity surrounding this group, many of the younger players are still yet to demonstrate their ability to manage the pressure of being the team to beat, rather than being underdogs. The Netherlands are certainly not underdogs coming into Split, so how the Dutch deal with the added  pressure, particularly at the business end of the tournament, is the only real question mark over this team.

Statistically speaking, though, the Dutch should be confident, at least, of a place in the semi-finals. They have the best group-stage record in the European Championship history, topping their preliminary group on fourteen occasions; which could be crucial in this competition given the draws. Another accolade that the Dutch will cherish is the fact they are the tournament’s all time scorers (1498), although their defence may prove to be the decisive factor against Europe’s other top teams. 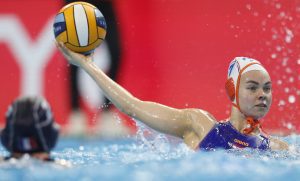 Germany have competed at all but one of the European Championships, although given such a presence, it is difficult to assess the progress made of their national team, considering that the team had to  admirably crowd fund to even compete at Split.

Historically, aside from a bronze medal when they competed as West Germany at the first European Championships in Oslo in 1985, Germany has since occupied the ‘best of the rest’ space behind the top five or six. However, with the rise of the likes of France, Israel, or even Serbia, Germany’s best days might potentially be behind them.

In terms of run up to Split, the Germans were one of three national teams to play at the Szentes Cup last week, and in truth, they were off the pace. But while a medal is not likely, finishing in the top eight is certainly part of their history. Between 1999-2010, Germany finished 7th at six consecutive championships. Germany have only ever made the quarter finals three times, losing twice to the Netherlands (2016 & 2018) and once to Russia in Seville in 1997. 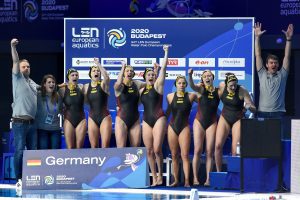 The last year has been one of development for the women’s game in Croatia, with much work still needed. But the hosts will look forward to testing themselves against Europe’s elite in Group A, while hoping to give their home crowd something to cheer for when they face Germany and Romania.

Their highest finish at the Euros was 8th when they last hosted the tournament back in 2010 (Zagreb). Contrary to what some might suggest, Croatia’s head coach, Alijosa Kunac, believes there is slight pressure on his team to really show what they can do.

Something that will be very clear though from the Croatian line-up is how young their team is. Much of their squad is composed of players from the U19 team that finished 8th in Netanya, and the majority of the team are still in their late teens. 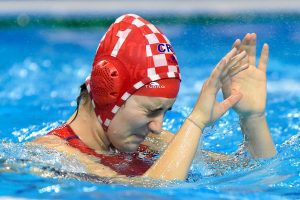 Romania will know that they are huge underdogs at their maiden appearance at the European Championships. They won’t have any medal aspirations, or even dream of making the quarter finals. But the Romanians, coached by former international Berttini Nenciu, qualified in their own right to this competition, and will look forward to being part of the spectacle.