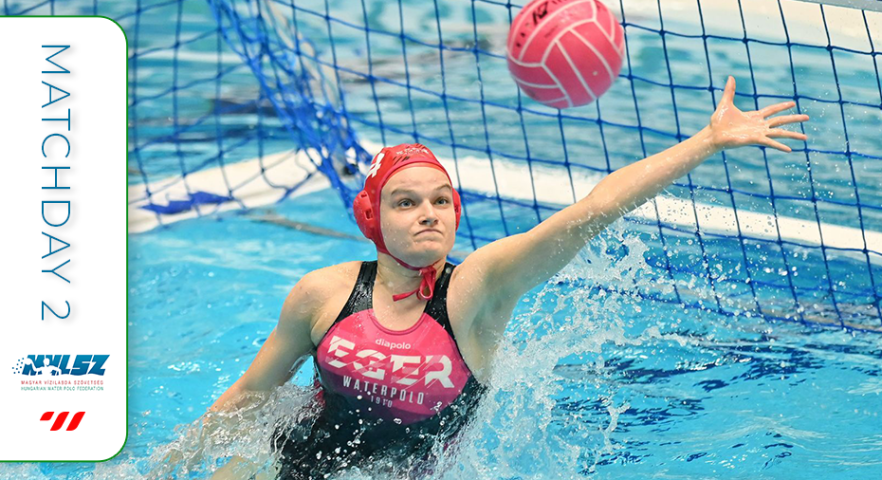 The second matchday of the Women’s OB I in Hungary took place today, and all the teams that secured three points on the opening day of the season secured another three points again today.

The majority of the top teams secured points on the road; UVSE and Fradi had an easier time against Gyor and Szeged, while Dunaujvaros and BVSC eventually prevailed against gritty opposition (Keruleti and Szentes respectively). Eger had no trouble defeating Tatabanya.

The next matchday will be on Saturday, meaning that the teams in the OB I will have played three games in seven days, prior to a mini Autumn break ahead of the World League Super Finals and the Hungarian Cup.

Ferencvaros prevented a slip-up in the opening match of the day by defeating Szeged by a score of 16-7.

Greta Gurisatti sprung out of the traps super quickly with a first quarter hat-trick to put Fradi on the front-foot. From there, a brace from Szonja Kuna, as well as strikes from Panna Petik and Emma Gulyas-Oldal, gave Gyorgy Gerendas’s team a commanding 7-1 lead at half-time.

The second half of the game was much closer than the first, but the damage had already been done.

Seven goals from Kinga Peresztegi-Nagy guided UVSE to a strong victory against Gyor – UVSE’s second straight-forward victory of the season. The team from Margaret Island dominated today; Kamilla Farago netted four, while there was a hat-trick for UVSE’s centre-forward Tekla Aubeli.

The visitors took a 5-1 lead after the first quarter, and ten consecutive scores in the middle section of the game (Peresztegi-Nagy 3, Hajdu 2, Aubeli 2, Tiba, Farago, and Baksa) put Zsolt Vogel’s team to the sword.

Gyor have had two tough results this season, but they desperately need to re-focus for a hugely significant game against Tatabanya on the weekend.

Dunaujvaros secured three hard-earned points this evening in the third district of the capital with a 10-5 victory over III Keruleti TVE.

In a really physical contest, Denes Lukacs’s team started brightly, with two well-taken scores by Panna Kudella. However, the tide turned thanks to two goals scored by Krisztina Garda either side of the first quarter break. A crucial score by Nikolett Szabo put Ujvaros up by two goals, a lead they would not relinquish (5-3)

While an opportunity to take points was missed, Keruleti will be satisfied with how they competed this evening against a decent Dunaujvaros outfit. Keruleti was missing Gerda Brezovszki and Barbora Papai, who would have undoubtedly added a lot of quality to the team.

Dunaujvaros return home this weekend undefeated in two for their next game against Szeged, while Keruleti travel a short distance to Alfred Hajos to take on the reigning champions, UVSE.

Eger enjoyed their second game back at Aladar Bitskey with a 24-7 rout over Tatabanya.

There were goals all-around for Eger’s attackers; Csenge Szellak (5), Dorottya Szilagyi (3), Borbala Kekesi (3), Ilona Borsi (3) and Rebecca Parkes (3) were all in the goal-scoring mood.

Eger has two wins from two, but are yet to play on the road. That changes this weekend when they travel to Zuglo to take on BVSC, which should be a barometer for the progress the club has made over the summer.

BVSC had to work extremely hard in their contest against Eger this evening, eventually seeing off the Saints 9-5.

Despite Fruzsina Toth’s best efforts for Szentes (3 goals in the game), braces for Armai Zita and Nikolett Kele got the job done for the visitors.

The game was tied at 5-5 in the third, but four unanswered goals from Mercedesz Steiber’s team (Kele, Armai Dobos) was the difference in

Both teams have tough games up next; BVSC play host to the undefeated Eger, while Szentes travel to the capital to take on Fradi.