Wednesday in Belgrade marked the last day of the preliminary phase of the 4th World Women’s Youth Water Polo Championships, a day filled with exciting matches and uncertainty for the spectators. It was a decisive day for the teams taking the lead of their respective group. Teams advanced to the quarterfinals.

Three of Wednesday’s games directly decided on the group winners and all three matches did not disappoint in quality. The United States has defeated Hungary by only one goal, in the match where the Hungarians in the last minute hit the crossbar twice!

The Netherlands defeated Russia with two goals advantage, although only three minutes before the end the result was equalized (12:12). Finally, a brilliant match for the first place in Group B was played between Greece and Australia.

However, games between Canada and Serbia, as well as Uzbekistan and Brazil were also very interesting.

After finishing the preliminary phase of the competition, the national teams of the USA, the Netherlands, Spain, and Greece make it to the next phase. 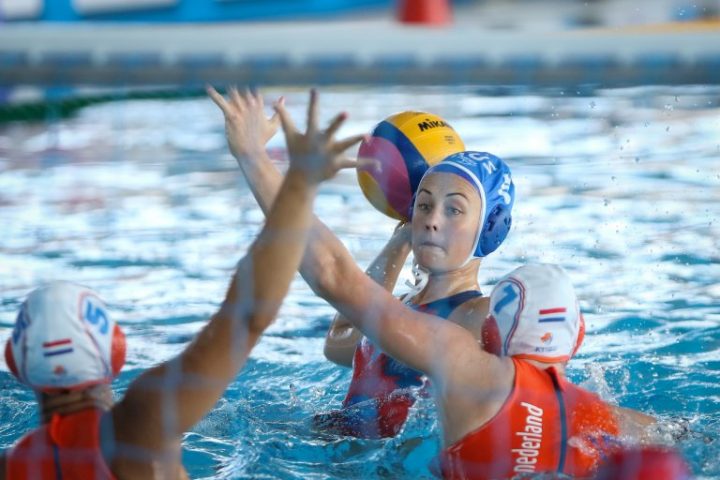 Few people could believe after the first 12 minutes for such excitement in this game. Kazakhstan had their game under control and lead comfortably 7: 2. Then Argentina started to play their best game so far in Belgrade. Tamagnone and colleagues made it back to on goal difference, it was 7:8, 8:9 for Kazakhstan when Kairollayeva made an encounter in favor of the better team.

Derby and probably the best match of the day, maybe even the best one after the first three competition days in Belgrade.
It was an excellent game for both teams, dynamic with highly educated players. In the first quarter only one goal was scored, Rybanska for Hungary. In the other eight minutes, the fight kicked-off. The two excellent players Weber and O’Shea scored two goals to equalize 3:3. After the second quarter, the result was 4:4. The fall of Hungary began in the third period. Abrielle Hill scored twice for USA (extra women situation and counter attack) for an American lead 6:4 and 7:5. The drama began with Petovara and Ruban, five minutes before when the Hungarian players Petovari and Rybanska scored for 7:7. The decisive goal for the victory of the United States was scored by Valeria Ayala 3.54 minutes by the end. In the last minute of the match, Berta Farago hit a crossbar, same as Morika Pap in the last second of a match!

The great effort of the South Africans led to an honorable defeat. New Zealand is a much stronger team and deserved to go for higher ranking positions.

Wonderful performance by two great teams, with in total 67 shots per goal. The Dutch started great, 3:0 after three minutes. Russia then consolidated, and until half-time they came, on three occasions, to only one goal down (4:3, 5:4, 6:5 for Netherland). Less than two minutes before the end of the second quarter Nina Ten Broek scored for a 7:5 Dutch lead. The Netherlands had a lead throughout the third period and at the end of this quarter, it was 11:8 for the Netherlands. The full excitement began in the final eight minutes. Russia by three goals in a row returned five minutes before the end of the game (12:12). But, it was also the end of the Russians for this match. In the next 150 second, the Dutch players scored three goals in a row which was unachievable for Russia. Netherlands won a match and positioned number 1 in their group (D) of the preliminary phase of the World Championship.

Spain showed once more on Day 3 that they have a team ready for a medal in Belgrade. In the first two quarters, they were far better than the Italians. Effective action, nice shots and convincing leadership 8:2. After relaxing in the third quarter, in last eight minutes the Spanish players showed again that they were the best team in group A.

After the first two equal quarters, Canada in the third part took advantage of the nervousness of the Serbian team and by four goals in a row, gain a big advantage of 8:4. The result did not change until 4.30 minutes by the end of the match. Now Serbia scored 4 goals in only three minutes and equalized to 8:8. However, in the last 70 seconds, Canada scored two goals (Gonzalez and Carroll). Enough for a Canadians victory.

During full three-quarters, Brazil was a much better rival, but in last 8 minutes team of Uzbekistan played extraordinarily well. They scored five goals and were able to completely reverse the result. In the end, with great luck, Brazil saved one point.

After a draw against Australia, the Greek took the lead of group B by only one goal in a total goal-difference. The absolute curiosity of the match was even three missed penalty shots of Greece and incredible 0-8 by the extrawomen situation! On the other side, Australia didn’t lead at all, but they deserved a draw or one point.