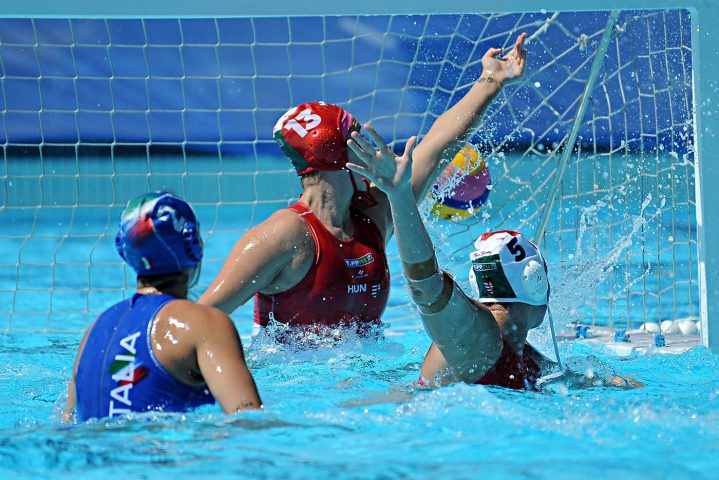 Italy ran out 10-9 winners against Hungary in a hugely entertaining Bronze medal match at the FINA World League European Finals.

The Italians were well worth their victory, and while Hungary fought gallantly particularly in the 2nd half, Italy produced some really top quality water polo right at the death. The Italians were really intelligent, and despite a lapse in the middle third of the match, they managed the game well.

Hungary once again threw away a lead. They led by two goals in the last quarter, having trailed by three in the 2nd. But as we have come to see from this Hungarian team, they can be wildly inconsistent when a game is on a knife-edge.

There were some outstanding contributions from Claudia Marletta – who scored a really amazing goal to level the match at 9-9, and from Italy’s centre-forward, Valeria Palmieri, who caused all sorts of problems for the Hungarians at the back. Roberta Biaconi, Caterina Banchelli (the goalkeeper of choice) and young Dafne Bettini also were excellent in the match for the Setterosa. Carlo Silipo will be please that his first tournament as a coach sees him bring home the Bronze medal.

For Hungary, it is now two defeats in two games. There were notable absences, and they felt the particular loss of Rebecca Parkes as a focal point in the pit. That said, Natasa Rybanska had a good game at centre, leading the Hungarian comeback in the third and fourth quarters, while had it not been for Alda Magyari in the Hungarian goal, the scoreline could have been far worse for Attila Biro’s side. The Hungarians will have to stamp out these kind of performance’s if they are to put on a big show in front of a home crowd in Budapest later this summer for the World Championships.

In the fifth and sixth Play-off match this morning, Greece beat France 15-10.

There was nothing to separate the two teams after 8 minutes. The majority of the threat in the attacking phase for both sides came mainly from the extra-player situations.

However, Italy opened up a small lead in the second thanks to goals from Roberta Biaconi and a great finish in the pit via Valeria Palmieri.

But Hungary, who had thrown away a decent lead yesterday against Spain, started a little comeback – netting four in a row (2 from Szilagyi) to level the scores at 7-7 going into the last.

But Claudia Marletta and Valeria Palmieri both produced individual moments of brilliance – worthy of winning any game.

Early in the match, Hungary had a decent chances on the wings with shots from Dorottya Szilagyi and Vanda Valyi, however, Caterina Banchelli in the Italian goal was not really challenged.

Italy then made the breakthrough as a result of Dora Leimeter’s exclusion. Claudia Marletta was in a central position, and fired home for the games first goal.

Hungary were level a minute later with a well worked man-up play. The ball was fizzed out to Szilagyi on the left-wing, and she picked out a great pass to her fellow Dunaujvaros teammate – who tapped home on the post.

Hungary were keen to look for the pit, but Domi Picozzi and Claudia Marletta were stealing the ball and defending cleanly.

Italy took the lead once more from a man-up situation. Krisztina Garda was out for 20, and Ekipe Orizzonte’s Giulia Viacava rammed the ball home for 2-1.

Hungary were perhaps fortunate to get level via Vanda Valyi – as her shot on the right ricocheted of the arms of Banchelli before creeping in. The Italian keeper should have done better, but Hungary won’t be complaining.

Valeria Palmieri was doing some good work at centre, and drew another major. The ball then found its way back to the Ekipe forward, who had her shot on 3m well saved by Alda Magyari. Magyari was then called into action right at the end of Q1, as this time Domitilla Picozzi was denied by the 1.9m tall keeper of UVSE.

Two tame efforts in the 2nd caused no trouble for the two keepers. Szilagyi shot was limp to Banchelli’s right-hand side, while Claudia Marletta probably chose the wrong option when trying to lift the ball above the head of Alda Magyari.

There was nothing wrong with Chiara Tabani’s effort on another Krisztina Garda exclusion, but Magyari in the Hungarian goal was in typically soul-destroying form, as she kept her side at level-pegging.

However, Magyari was eventually beaten when she probably should have done better by her high standards to keep Dafne Bettini’s shot out, but she could only divert the shot into her own goal.

Hungary did get the next score thanks to an excellent set move from Guilia Viacava’s exclusion. Kamilla Farago picked out the pass to the back post, where the tall figure of Natasa Rybanska towered over her defenders to nod home from 2m.

But the Italians made the last two minutes pay, as Valeria Palmieri scored an absolute beauty in the centre from Roberta Biaconi’s delicate pass, before Biaconi herself gave her side a 5-3 lead at the turnaround with a driven shot into the bottom left of Magyari’s goal.

VAR did look at whether a Dafne Bettini shot crossed the line, but it was correctly not awarded as a goal as the scores at half-time were 5-3.

Into the second half, Italy made it 6-3 as Sofia Giustini dispatched well from close range, but a minute later Krisztina Garda pulled one back for Attila  Biro’s side with a decent score from the top.

Still trailing by two goals, Hungary pushed to get back into the match, and while Caterina Banchelli made a decent initial save from Dorottya Szilagyi, she parried the ball right back into the danger zone, and Zsuzsanna Mate tucked away the follow-up to bring Hungary within one score (6-5).

Szilagyi never normally misses two shots in a row, and she scored emphatically to equalize for the Magyars. Sofia Giustini was excluded, Leimeter picked out her teammate, and Szilagyi launched the ball past Banchelli.

You could sense a momentum shift in the game, as Hungary had scored three in a row. And moments later, it became four in a row, as Szilagyi once again produced a moment of quality for her side with a pinpoint cross-cage effort into the roof of the net.

Italy however, were in no mood to gift Hungary the match. They responded immediately to going behind with a silky set-move that saw Roberta Biaconi grab her second of the match. Picozzi drew the defence on the right, before shifting the ball over to Biaconi on the left – who tucked the ball cleverly into the bottom right-hand corner.

Brigitta Horvath had a decent chance to restore Hungary’s lead right at the end of Q3, but Caterina Banchelli was equal to it, as the game was level going into the last quarter.

Into the last, Natasa Rybanska upped her game, and started to create for her side. Some good movement and setting in the pit drew the Italian exclusion – firstly to dink a lob past Banchelli, before she gracefully picked her spot in the top-right hand corner to give her side a two goal lead for the first time in the match (9-7).

Sensing the game slipping away from them, it was now Italy that needed to force the issue. And right on time, Dafne Bettini was on hand (from Zsuzsanna Mate’s second exclusion) to rocket the ball of the post and in past the helpless Alda Magyari.

Kamilla Farago looked like she would restore Hungary’s two goal lead midway through the last, but a quite outstanding block from SIS Roma’s Chiara Tabani ensured the Italians still had something to fight for.

Carlo Silipo felt it appropriate to call the time out when Krisztina Garda was wrapped on three personal fouls, and although two Kamilla Farago blocks denied the Italians, an outrageous no-look shot from range by Claudia Marletta completely fooled the Hungarian defence to pull her side level at 9-9.

Before long , Zsuzsanna Mate was also on three exclusions, and her defensive eagerness  gave Italy a chance to take a 10-9 lead, which they did from a fantastic take by Valeria Palmieri on the post. Her second of the game put the fate of the game firmly in her side’s hands.

Chiara Tabani nearly scored a quite incredible goal, as she saw Alda Magyari off her line. But the shot from 10m hit the frame of the goal, and with less than 30 seconds left, Attila Biro called the timeout to give his side one last chance to stay in the contest.

And so for the last attack, Alda Magyari was sent up, but Dora Leimeter couldn’t make it count, as Italy, by the skin of their teeth, secured the Bronze medal for the Setterosa.