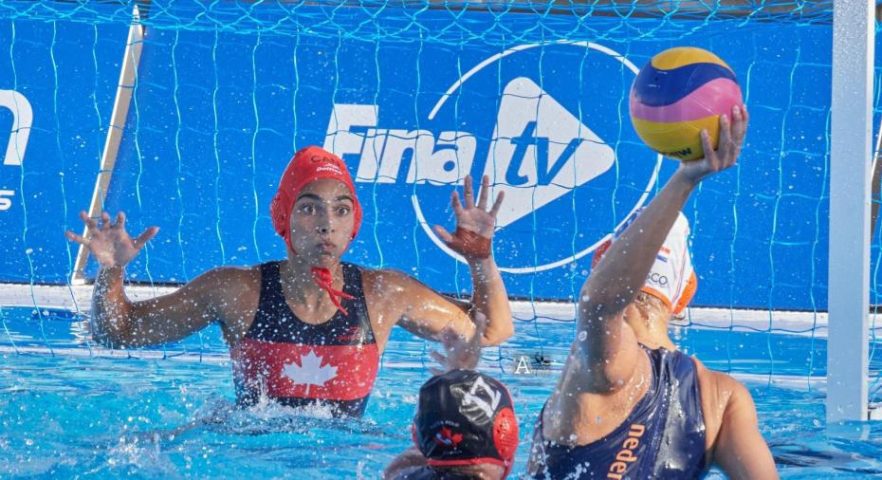 The morning session of the third day of the World League Super Finals has concluded.

In Group A, Canada stunned many by defeating Netherlands 15-14 in a penalty shootout triumph. In the game after in Group B,  Hungary trounced New Zealand by a score of 25-9.

Despite losing, the Netherlands will still make the semi-finals, unless Italy can get a surprise victory against the menacing United States later today. Hungary are through to the semi-finals though, irrespective of whether Australia can get a good result against the hosts.

Two penalty saves from Jessica Gaudreault in a sudden-death shootout led Canada to an unexpected victory over the Netherlands this morning.

After a closely fought 11-11 tie in normal time, it was the Canadians who had the poise to hold their nerve and seal a victory that will no doubt boost their confidence ahead of their remaining games.

Canada were really resilient in the match, and deserved what they got in the contest, even despite falling behind several times to the Dutch. Jessica Gaudreault was outstanding in the match, even before her penalty heroics. 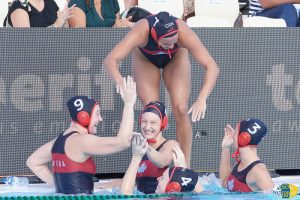 The Netherlands looked a bit weary, perhaps as a result of a tough grudge match yesterday against Italy. But the Netherlands shall still qualify for the semi-finals as the runners-up of Group A unless Italy can pull off a surprise victory over the United States later this afternoon.

It was a game for the left-handers, with fourteen of the twenty-nine scored in the match, including penalties, coming from the lefties on both teams (Simone van de Kraats 5, Vivian Sevenich 1, Emma Wright 3, Kyra Christmas 4, and Verica Bakoc 1).

The Dutch started the game well and leaped out ahead to a 3-0 lead, but the Canadians levelled the game up at 3-3 by the end of the quarter. Jessica Gaudreault was excluded, leaving the Canadian net unguarded for Lola Moolhuijzen to convert, before Vivian Sevenich powered home a nice backshot. Simone made it three on the left-side.

It was only after finding themselves three goals down that the Maple Leafs started to play. Kyra Christmas found the first from the left, Emma Wright the second via a well-taken 5m penalty, and Plebiscito Padova’s new signing, Hayley McKelvey, levelled the game up with 15 seconds left in the period. 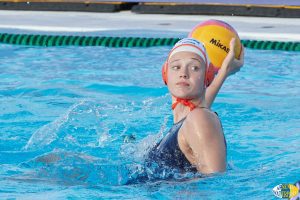 The second period followed a similar pattern of play, with the Dutch gaining a slight advantage before Canada regained parity. Marit van der Weijden and Lola Moolhuijzen saw their powerful strikes beat the Canadian keeper. Axelle Crevier found some space and was well picked out by Kyra Christmas, before Christmas herself converted a goal, her second of the game (5-5).

The Netherlands led by a single goal going into the second half. Van de Kraats netted twice in the last two minutes, separated by a quickly-taken attempt by Verica Bakoc.

The Netherlands were finally punished for continuing to allow Canada back into the game. Two goals from Hayley McKelvey put Canada ahead, and while Rogge and Moolhuijzen temporarily gave Eva Doudesis’ team a 9-8 lead, Kyra Christmas’ third goal of the match took the score to 9-9. Canada had double figures and a single goal lead going into the last quarter thanks to a beautiful lobbed attempt by Emma Wright, who was left quite unmarked on 4m on a quick breakaway. 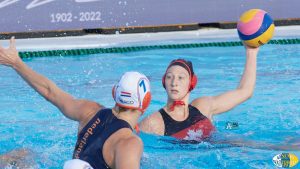 The Netherlands once again netted a double score in the last period to take the lead, but Hayley McKelvey fired home her fourth goal of the game to send the match to a penalty shoot-out. During the quarter, there was a lengthy VAR review after Shae La Roche had to be withdrawn from the game after a nasty looking blood injury to the face. VAR adjudged Simone van de Kraats to not have committed a violent action.

Jessica Gaudreault was the Canadian hero in the shoot-out, getting down well to her left to keep Brigitte Sleeking, before, in the last penalty, keeping Fleurien Bosveld out. Canada netted four of the four penalties they took in the game.

Against his former team, Attila Biro’s Hungary will now prepare for a semi-final match against the United States after their straightforward 25-9 victory over New Zealand this morning.

In a bit of a thrashing by Hungary, Greta Gurisatti netted six goals in the game, while three players; Zsuszanna Mate, Kamilla Farago and Kata Hajdu all found the target four times. 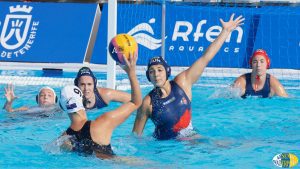 As the scoreline suggests, the Magyars didn’t need to expend that much effort in dispatching the Kiwis, and at times it was all too easy for Hungary to carve the New Zealand defence open.

Like in all of their games so far, New Zealand had little moments in the game where they were impressive, particularly in attack. But they were left wanting in defence today, and Hungary took full advantage.

Hungary started on the front foot, and it didn’t take Kamilla Farago long to find the first goal of the game (19 seconds). Farago then added a second score quickly after on a swift counter-attack. Millie Quin netted two impressive goals for the Kiwis on the left side, but a Zsuzsanna Mate lob and a fifth effort by Gurisatti put the Hungarians ahead after eight minutes.

Into the second quarter, Hungary netted two quick scores: Rebecca Parkes awkwardly tapped home at the back post against her nation of birth, while Gurisatti put away a carefully placed lob. 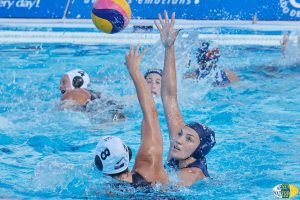 Emily Nicholson netted twice in two attacks for the Kiwis, both from close range, before Gabrielle Milicich converted the power play to keep Angie Winstanley-Smith’s side competitive (5-9).

Emmerson Houghton’s shot from range put New Zealand within three scores, but a rocket on the right side by Vanda Valyi took Attila Biro’s team to 10-6. Tenerife Echeyde’s very own Emily Nicholson finished really well under pressure at centre, but Hungary pulled away before halftime via two counter-attack finishes from Greta Gurisatti and a pinpoint finish from Rita Keszthelyi. 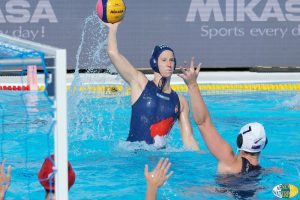 The third period was really one-sided, and Hungary had it all their way. Farago, Gurisatti, and the newly introduced Kata Hajdu all converted the power plays that came the Magyar’s way. Kata Hajdu then doubled her tally for the day with a penalty from 5 metres. Panna Pocze netted her first of the game, shortly before receiving her third exclusion.

A tired-looking New Zealand continued to ship goals, with Zsuszanna Mate finishing the game well with a hat-trick in the last quarter. Kata Hajdu hit two hard shots from a long way away that got past Jessica Milicich in the New Zealand goal.  Greta Gurisatti had the final say though, netting her sixth and final goal in the game to take Hungary to 25 scores.