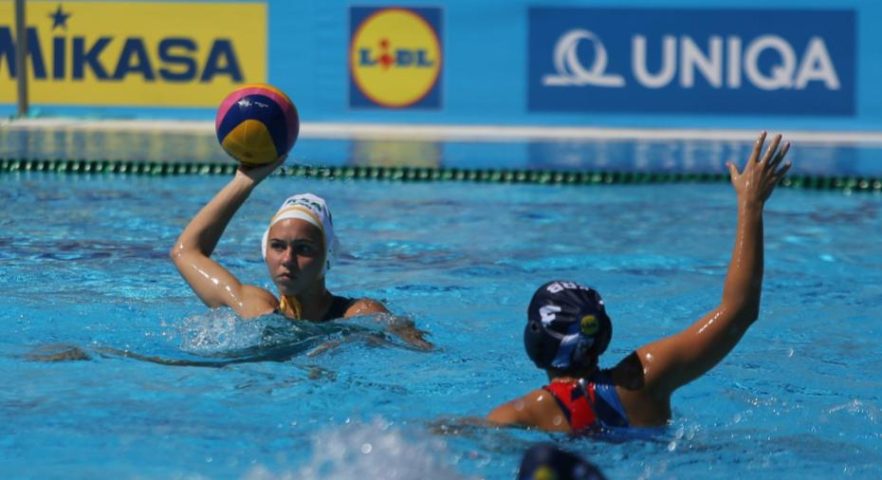 After four days of action at the Women’s World Youth Championships in Belgrade, we are finally at the business end of the competition, with eight teams making it as far as the quarter finals.

Tomorrow we will see some hugely exciting quarter final clashes in the pool, as the classy looking Hungary take on Australia, while toppers of Group B, Greece, will fight against the other team from Oceania, New Zealand.  After those, we see two completely different water polo philosophies collide as the Dutch meet the junior Setterosa, before the last game of the day sees a box office meeting between two of the greatest rivals in the women’s game, Spain against the United States.

The best game of the day was the penultimate contest in which Croatia very nearly pulled off the comeback of the century against Australia. The Stingers eventually came out on top though, with the scoreboard registering as 13-12.

Hat-tricks from Alexandra Nassar and Magali Ogg paved the way for the Stingers to qualify for the quarter finals.

Two goals for Sienna Green and Magali Ogg helped Australia gain a big lead in the first (8-3). But with five goals for Rozic, and a double for Butic, Croatia slowly ate into the Stingers’ lead.

Into the last, Jelena Butic then scored twice off Croatian powerplays to draw level at 12-12. But despite the heroics from Croatia, a beautifully placed shot by Aussie left-hander, Alexandra Nassar, won the match and booked Philip Bower’s team into a quarter-final date with Hungary tomorrow at 16:00.

In a low scoring but brilliantly poised game, Canada were relatively comfortable for the first half, and had a two goal buffer right up until the third period. The Maples will now face Kazakhstan in the 9th-12th play off semi finals, while New Zealand will once again have to be on top of their game if they stand any chance against Greece in their quarter final.

Elsewhere, Italy had no trouble in brushing off Uzbekistan, with Morena Leone (5), Marta Misiti (4), Emma De March (4) and Aurora Longo (3) all helping themselves to multi-scores. The Setterosa were as good on the break and on man-up as they were in defence – with Helga Santapaola having a decent game in goal for Giacomo Grassi’s team. There is no time to celebrate though, as a tough quarter-final duel with the Netherlands awaits.

Meanwhile, the greatest rivalry in women’s water polo will spill over into the Youth World Championships, as the United States thrashed Kazakhstan 17-3 to set up another epic showdown with Spain in the quarter finals. Jenna Flynn climbs up the goal scoring charts with five more goals today to take her keep to sixteen in four games, while Laguna Beach’s Ava Knepper netted three goals from four attempts. USA’s two keepers, Christine Carpenter and Lauren Steele, combined for 15 saves in the match.

Serbia triumphed over South Africa via a tense penalty shoot-out, with nothing to separate the two sides after four quarters of action packed water polo (9-9).

The penalties on display were not of the highest order, but that only added to the spectacle. Ana Andrejic, Tijana Lukic and Jovana Radonjic all hit the frame of the goal for the hosts, but it was the Serbian keeper who was the hero of the day, making vitally important stops from Rebecca Currie, Ilse Southey and Kendell De Beer – the latter of whom missed two of her three penalties in the shootout, the last of which struck the post to seal the win for Serbia.

Before the penalty drama though in the other classification match, Japan hammered Turkiye in the first game of the day, winning 24-9.

The Asian side were clinical in all facets of the game, particularly on their power-plays and counter attacks. Their best scorer in Belgrade, Haru Yamamoto, scored a double hat-trick, while Shoka Fukuda scored four in the game.

Duru Kaleagasi, who missed the game against Hungary due to disciplinary matters, scored four in this one for the Turks.