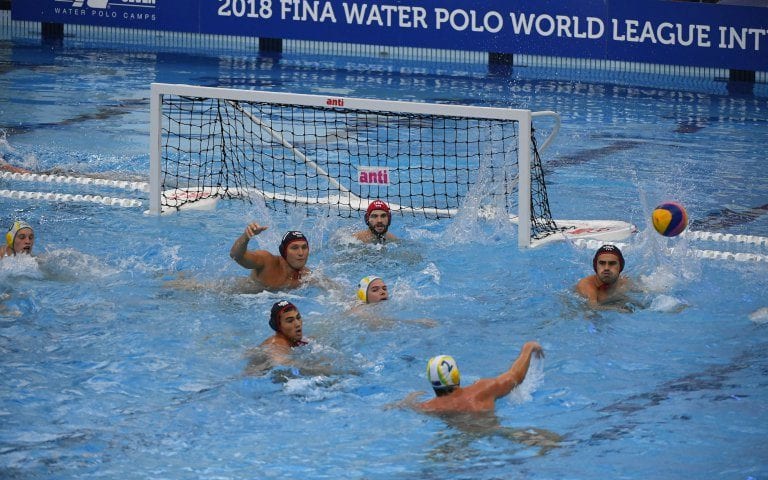 USA stronger than Australia in the final

The USA were too fit and fast for Australia, winning the World League Intercontinental Cup in Auckland with a 9-6 victory in the final.

With a suffocating defense, the USA kept Australia’s outside shooters quiet, leaving the Australian coach to lament his team’s fitness and poor passing. Australia’s big center forward, Joe Kayes, was shut down inside and kept to just two goals, though he finished with 20, two behind Canada’s Nicolas Constantin- Bacari.

Japan won the bronze match 12-7, with an impressive half that saw them out score Kazakhstan 7-2, and Canada dominated New Zealand to win 12-6 and finish fifth. One of the most exciting games was the battle to not finish last, Saudi Arabia beating New Zealand second side, 11-10.

The USA started strongly with two quick goals before Australia fought back, Nick Brooks scoring on an extra man before Nathan Power leveled. But Marko Vavic gave the USA the lead at the break with an absolute scorcher from out wide. With few chances in the second quarter, Power rattled the cage but it didn’t go in as the USA’s inside defense on center forward Joe Kayes kept him from being a potential scoring option. Aidan Roach squeezed the ball through the USA defense to bring Australia level at 3-3 but Alex Bowen soon put them back in front, 4-3.

With the spoils shared, 1-1, the USA led 4-3 at the halftime break. Kayes sucked a penalty when he had his arm yanked trying to catch a cross goal pass and Australia’s captain, Aaron Younger, didn’t miss, the scores back to even, 4-4. But Johnathan Hooper moved the USA back into the lead and another powerful shot from Maxwell Irving, his second of the game, gave them a two point buffer. Kayes popped out from the post and bounced in Australia’s fifth goal but Bowen gave the USA their two point lead again with an extra man goal, the Americans ahead 7-5 with a quarter to play.

Irving gave the USA a three goal lead with his third before Kayes scooped up loose ball and brought it back to two with his second for the night and 20th for the tournament. Vavic scored a remarkable goal when he waited under the water then stole the ball off Australia’s goalkeeper Anthony Hrysanthos for the simplest of goals, the USA ahead by three, 9-6. With about 50 seconds to go, Australia were out of time, the USA convincing winners.

“Australia are such a great team, they are well coached and have really great players, so it was great to match up against them. We’ve had so much fun.  They’ve done a great job with the tournament.”

“The USA were deserved winners.  We missed too many opportunities with the extra man and too many bad passes which were punished. It’s a good game for us to see where we are at and we know where we have to improve. Definitely No1 is fitness.”

New Zealand 2 went close to nabbing the ninth place, but a goal from Kingdom of Saudi Arabia in the last few minutes of the match gave the hosts the last spot.  Saudi Arabia led 4-2 after the first quarter with goals to goals Mohammed Gahal, Adil Almalki, captain Khaled Alharbi and Mohammed Alhelal.

New Zealand stayed in the contest with James Catlin scoring twice for and they out scored the Saudi in the second 3-2, closing the to 5-6 at the break. Both teams scored 2 times each in the third quarter, and the Kingdom of Saudi Arabia kept lead in 8-7. New Zealand got close to the win in the final quarter scoring two times with Rowan Brown and one with Ryan Pike, but the Saudis matched them goal for goal to win and finish ninth.

The third quarter remained slow and with just one goal scored by Zhongxian Chen taking China to a 4-1 lead. Chenghao Chu scored for China in the last quarter, but Argentina came back in to the game and leveled the score. German Yanez and with Ramiro Veich got two goals each, and the game was going into a penalty shout out, when Ramiro Veich got his third goal and guaranteed to Argentina the 7th place on the tournament.

Canada’s Nicolas Constantin-Bicari went on a six goal scoring spree to help secure a 12-6 win against New Zealand that pushed the Kiwis into sixth in their home tournament. Matthew Bryant opened the scoring for New Zealand, but Constantin-Bicari leveled to take the game to 1-1 at the first quarter. He and David Lapins scored twice each in the second quarter to give Canada at 5-1 lead at the break.

New Zealand closed the gap through Nick Paterson, but Canada responded with goals to Jeremie Cote and Bicari, keeping the four goals lead, 7-3. Bicari opened the scoring in the final quarter and when Lapins chimed in, they had a commanding 9-3 lead. New Zealand fought back with Jerome McGuinnes scoring, but Bicari and Cote pushed Canada even further ahead, 11-4. New Zealand’s captain Matt Small and Sean Bryant scored a goal each, but Bicari was unstoppable and got his sixth goal in the match, giving Canada the 5th place on the tournament.

A big first half and some superb shooting by Seiya Adachi who scored five goals to finish the tournament with 18 helped Japan to a 12-7 win to secure bronze ahead of Kazakhstan. Japan led 4-1 at the first break and were in front 7-2 by halftime.  Kazakhstan weren’t helped when skipper Yevgeniy Medvedev was rolled late in the half.

The game was effectively safe for Japan after a strong third quarter saw them 10-4 ahead and they were able to relax a little bit in the final which saw Kazakhstan outscore them 3-2. It wasn’t enough with Japan’s shooting too good, Yusuke Inaba capping a fine week in Auckland with three more goals to take his tally to 14.