Xavi García — Back to Barcelona Wearing The Croatian Cap

Current World champion and Olympic silver medalist with the Croatian team, this lefty with Catalan roots sees host Spain as one of the tournament’s front-runners. El Periodico brings the news.

It might be strange to some that Xavi García is as a member of the Croatian water polo team, but by now this has become a familiar sight. Back in 2016, García decided to leave Spain and join the Croatian national team for the Olympic Games in Rio, ending up with the silver medal.

Last summer, at the World Cup in Budapest, Xavi and his teammates climbed to the top of the podium, becoming world champions. And now, a year later, it’s a different situation since he’s playing at home against his former teammates.

This type of national team transfer became common in many team selections. It’s the result of a very loose regulation by the International Federations, which allows players to change national teams if they possess the team’s nationality and haven’t played for any other national team for 12 months.

Today, there are many examples of players doing this. Felipe Perrone returned to Spain, after competing with Brazil in Rio, Guillermo Molina, who now plays for Italy, or with the Argentine Chalo Echenique, who played the Games with Spain and now dives in the pool for Italy. 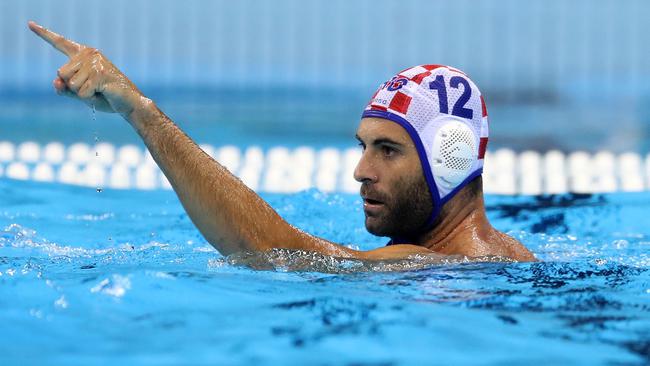 “This is the first time I’ve played here at the national level, although I’ve done it at the club level with VK Jug Co. But I must say returning home is always special,” says Xavi García, 34, who was clear on preferring not to cross paths with the Spanish team at the Picornell.

“If we see each other, I would like it to be in the finale. I have many friends in the Spanish team with whom I talk regularly. I’m good even with the coach, who’s been my teammate for a long time — we have a good relationship. If we don’t make it to the top, I’d like the Spaniards to take the trophy.”

In addition, Xavi García is one of those players who defended the decision David Martín made for the tournament. “There’s nothing to envy in any selection. For me, the Spaniards are one of the favorites for not only this Championship but also the future.”

“David is quite skilled and he’s given the team a great playstyle. You can see that just by looking at Barceloneta. There’s a specific playstyle to them they’ve been running for years, getting a lot of work done,” says García. “They’ve shown their quality in the Eurocup, in the World League and the Mediterranean Games. I would be surprised if they don’t get a medal in this competition.”

The decision to change the national selection was not complicated for Xavi, whose family lives in Croatia. Since 2013 he has the Croatian passport after playing five years in Rijeka and now in Dubrovnik. He has three daughters with Aida: little Dara (4) who was born in Spain, the median Elsa (7), who lived in the two countries, and Amanda, the oldest (12), who is Catalan. According to Xavi, all speak Croatian better than Castilian and Catalan. “We are very integrated,” he says, and that means he does not even consider coming back to Spain.

“And it is great being there. I have to be honest and, above all, grateful for all the years Croatia gave me to play with them. In all these years, people have treated me really good. In the end, it was Spain that no longer counted on me and the only option to go to Rio was going with the Croatian team. Although with David as a coach I would think about it, I think that the Spanish national team is changing.”

In the end, water polo favors friendships over flags. “It’s a very small world. You play in selections, but also in clubs, and you see old and new faces from everywhere. And good vibes always prevail. We are like a family, in a certain way,” he adds.

In Barcelona, Xavi García is looking for his third consecutive medal with Croatia, which is exciting considering their success in the World Cup. Though when analyzing the Croatian possibilities on the European level, he remains cautious. “We need the best players. And until Barcelona, we could not play with all 13 players as one. It will be very complicated, it is a tournament marked by balanced squads.”