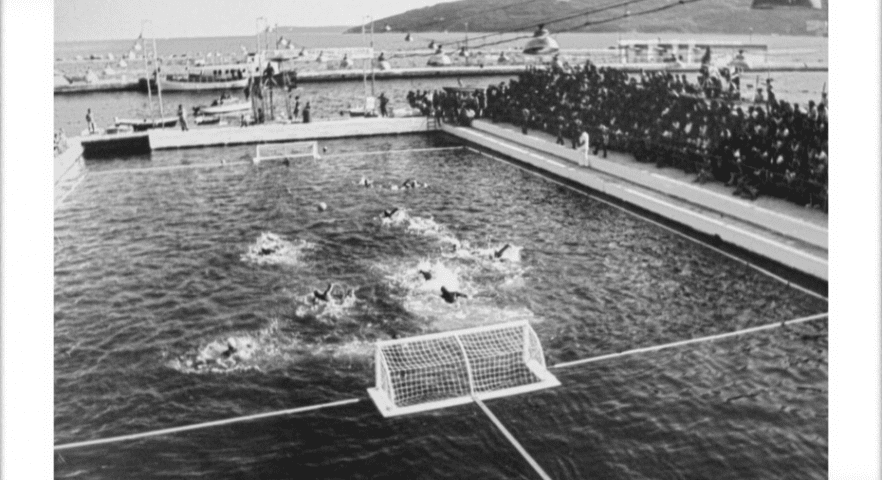 Jadran Herceg Novi celebrates its 100th birthday this year. One of the best water polo clubs in the ex-Yu countries was founded in the summer of 1922.

On the occasion of the jubilee, Total Waterpolo publishes the most interesting stories about Jadran’s history.

A TALENTED GENERATION THAT NEVER FULFILLED ITS POTENTIAL (1972 – 1981)

As the Club suffered from the lack of both adequate working conditions and money, in spite of great efforts made by the Management and especially its president Stevan Vukotić and its high-level organization, numerous talented players just couldn’t reach their full potential.

The swimming sections worked modestly and in even more modest conditions, and only within Montenegro. The members participated en masse in the summer months, but what was happening in autumn? Everyone went their own way, and all of them were repeating the same message – see you next summer!

In spite of this, young water polo players achieved top results, which was primarily attributable to the great talent and top work of the coach Dušan Bato Dabović. They were the champions of Yugoslavia in the pioneer, cadet and junior age categories. Many of them found their place in the cadet and youth national teams. 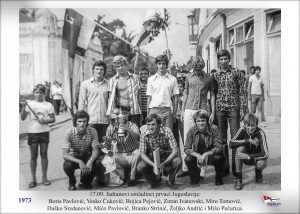 The national champions in the junior category, 1973

The first team as the crown of each sports club’s success had more problems than the other ones had. It was divided into the ones studying in Belgrade and the ones remaining in their own town during winter, without an indoor swimming pool, and thus being forced to travel daily to Kupari nearby Dubrovnik, if they wanted to train. There was an appropriate swimming pool in Kupari as a part of a military hotel, but traveling over there caused huge costs and wasted a lot of time, but produced minimum effects. 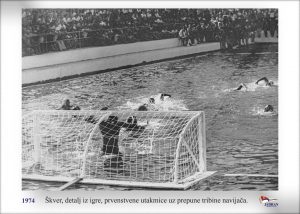 The water polo game in Herceg Novi in 1974

However, this exceptionally talented generation didn’t give up, resisted all difficulties and succeeded in maintaining the reputation of Jadran. During this period, Jadran was mostly the middle part of the table, and its coaches were Slobodan Pura Uljarević (1972), Dušan Bato Dabović (1973, 1974, 1975 and 1976), Božidar Cikota Stanišić (1977, 1978 and 1979) and Ratomir Pajo Pavlović (1980 and 1981). 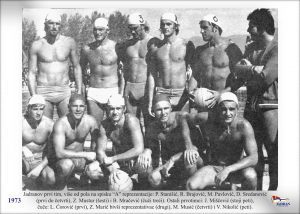 Jadran water polo team 1973, more than a half of the players were members of the national team of Yugoslavia

The top results Jadran achieved so far, in addition to its good work and patriotism, deserved to be rewarded. The president of the country Josip Broz Tito awarded the Club with the Order of Merit for the People with golden rays, which was handed over at the formal session held on 28. March 1977. 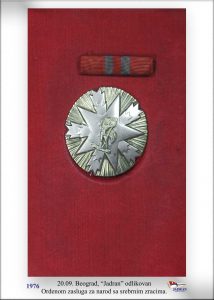 The Order of Merit

On the other hand, the club still operated under difficult conditions. Everything was further complicated by the devastating earthquake that took place on 15 April 1979 and distanced the Club from normal life and operation. Under such difficult circumstances, when the priority was to give shelter to the people and families and create conditions for the companies and institutions to continue their operations, there was neither understanding nor time for sports.

Through their own strength, the force of their will, their talent, and out of spite, the members of Jadran yet succeeded to survive and continue with pieces of training,  while looking sadly from the water at the town shaking and collapsing.

Full of faith in a better future and hope that Jadran would one day get a winter swimming pool, they continued onwards.

Jadran wouldn’t be our Jadran if wasn’t able to get out of the most difficult situations and become stronger each time.

Even under challenging circumstances, Jadran worked with faith and hope of getting a winter swimming pool and the conditions for their work all year round, thus aligning ourselves with other clubs. Commencement of the construction works on the second phase of the Institute “Dr. Simo Milošević” with a planned winter swimming pool of 33 x 25m had strengthened their hopes.

Until the completion of a grandiose building, the Club held on. The pieces of training were organized in Kupari and in small swimming pools of the hotels Plaža, Igalo, and Teuta in Risan. Even under so adverse conditions, the youngest water polo players of Jadran were the national champions in 1983 and winners of the October Award of Herceg Novi. 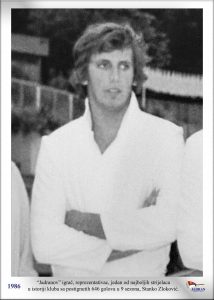 Swimming was revived by the return of the experienced strategist Ivan Zuber, which was evident in both the number of swimmers and their quality. The loss of one of the best coaches Dušan Bato Dabović in 1982 disrupted a lot the continuity of the work with promising future first-team players.

One of the highlights we remember is the monograph of Jadran written and published Dušan Duško Rašović, a prominent sports worker and sports archivist. Even better news arrived in autumn 1986 – the Institute Igalo’s swimming pool was opened. Something that seemed impossible happened –  Jadran got a roof over their head. 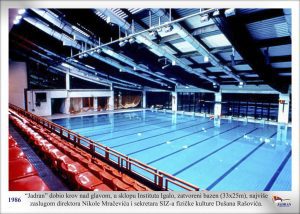 No more waiting: we had proper working conditions. There was a will, too. We had to “roll up our sleeves,” and we started with youngest ones. Creating a swimmer or player is a long process, but it’s worth it. Ivan Zuber was the first one who started to create remarkable female and male swimmers: sisters Beko, Milena Ilić, Ivan Lakičević and others, who broke records.

Younger water polo categories made progress and joined the top teams, who fought for the best rankings. The first team was the most difficult to regenerate. While waiting for the young players, they were struggling and giving their maximum. 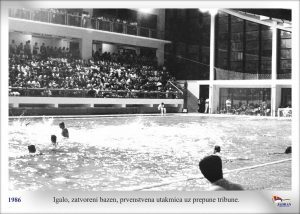 The game in front of the packed stands in Igalo

This upward trajectory of Jadran was stopped by the unfortunate war. The battlefield of Dubrovnik in the immediate vicinity of our town paralyzed everything and thus the functioning of our Club, too. Even though the swimming pool was closed, the competition had to go on, although in a smaller format – with the participation of the clubs from Serbia and Montenegro only. It was the hardest time for Jadran again.

Being in a delicate, almost hopeless situation, the management appointed Boro Mračević the first director of the Club believing he would help the Club get through this crisis successfully. 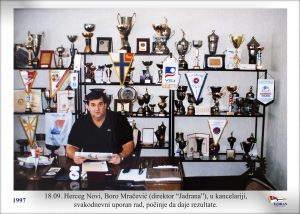 Boro Mračević in the office

Once again, this sports club proved to be indestructible, looking to the future and expecting new successes and titles even in the most challenging situations.

Good working conditions produced first results with younger swimmers and players. The swimmers led by Ivan Zuber and his assistant Nebojša Ristović achieved better and better results, and so do younger water polo categories. The first team had the most difficulties in moving forward. The coaches Zoran Ivanovski (1992, 1993 and 1994) and Dragan Novaković with their rejuvenated team although almost composed of juniors gained experience, and the team improved with every attempt.

In 1996, the coach was the celebrated shooter Stanko Zloković. With a somewhat reinforced team, he led Jadran to 4th place in the League and opened the door to taking part in European competitions, which are still open. 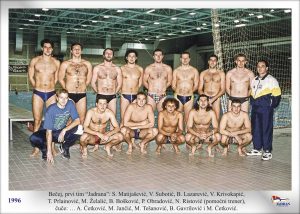 The first joy and real celebration were brought in 1993 by the cadets, and later on by younger cadets and the youngest player entitled for the first time to compete, although only ten years old. Three Yugoslav championship titles strengthened our hope and our faith that we were on the right track.

In addition to its sports successes, the Club was getting significantly stronger also in an organizational aspect. In order to improve its financial position, the Club set up its companies – Consortium Jadran and Jadran Sporting Commerce, and this filled the budget generously. The outlines of a real professional club were formed.

The swimmers continued to enjoy successes. In 1994, 1995 and 1996, they won the championships of the FR Yugoslavia and brought to the Club a lot of joy. Ivan Zuber organized an international swimming marathon – Mimosa CUP, which entered into the LEN Calendar.

The best Jadran female swimmer Duška Radan participated in the Atlanta 1996 Olympic Games. This was the first time that one of Jadran’s female swimmers gets Olympic status. Young water polo players continued to win national championships and the Cups.

In 1997, the first team’s coach was Dejan Dabović, an Olympic gold medal winner, and the Club, entered the European water polo scene, in addition to home competitions. The best shooter in the first century of the Club’s existence with scored 669 goals Boris Lazarević ended his career. 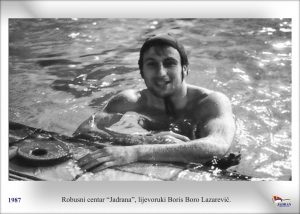 In 1998, Jadran’s players with their coach Jovo Vukasović became the cadet champions of the FR Yugoslavia and are also winners of the October Award of Herceg Novi.

In this period, Club President Milan Mišo Brajević deserved most of the credit for having opened doors for Jadran throughout Montenegro.

The book titled “Known unknown Jadran” by Borislav Boro Dabović, an architect and sports journalist, was brought to light. 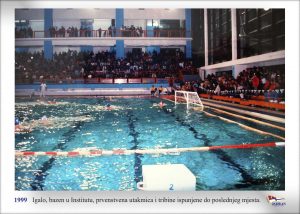 In 1998, Petar Porobić of Herceg Novi – Kotor came to the Club and brought the water polo professional work to the highest possible level. The Club’s determination to rely on its own forces gave excellent results and made the real stars from talented juniors

Porobić was the coach of the first team for the next years – 1999, 2000 and 2001. Finally, Jadran had a constant upward and approached the top of the Yugoslav water polo. 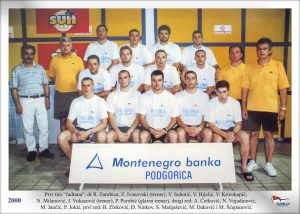 The ideas and designs for the swimming pool at the Škver were born in 2000. But the reality was that only serious reconstruction and remodeling work on the swimming place had been performed.

Jadran performed both at home and on the European stage with much success. The well-organized club, having an excellent professional staff, created preconditions for its better work. 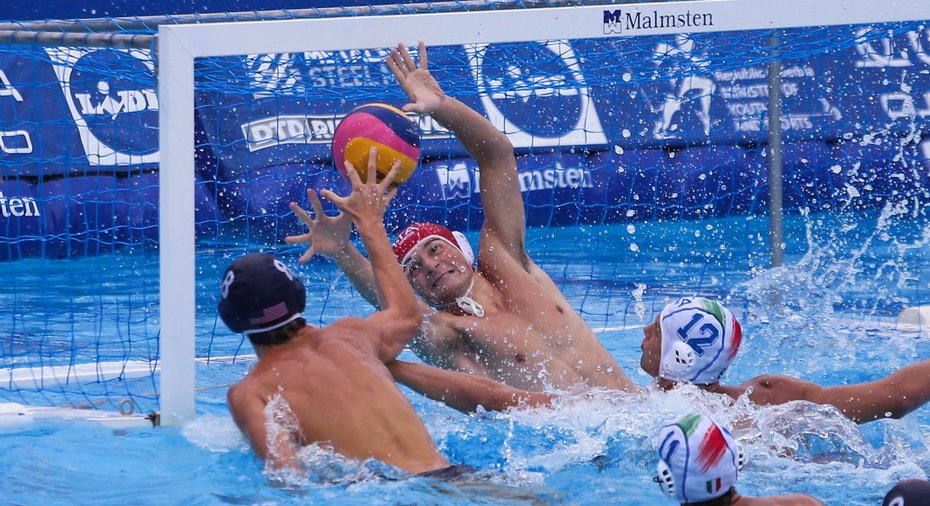