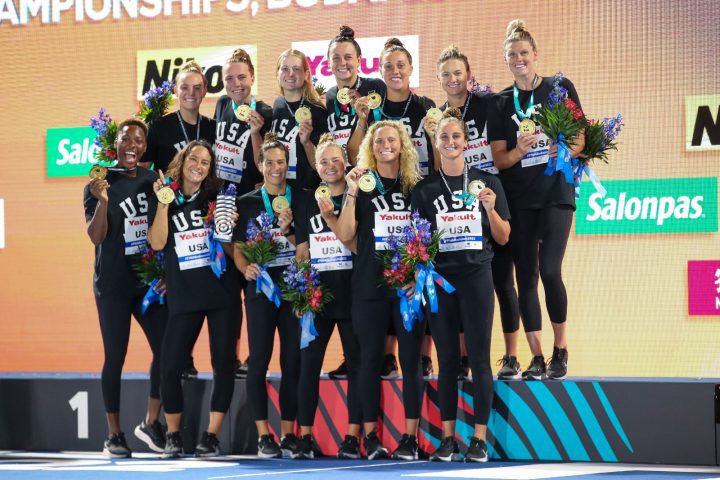 The United States have won their Seventh World Championships, breaking Hungarian hearts in Budapest, and running out 9-7 winners.

In a thrilling game at Alfred Hajos, Adam Krikorian’s team had to work harder than they have had to for a long time, facing a really gritty, determined Hungarian side.

The Gold medal for the United States means they have won their fourth consecutive World Championships.

It was on the defence for the Americans where the game was won, but also the individual performance of Maddie Musselman – who tonight played one of the greatest games of any female in a final at the World Championships.

Ryann Neushul was on her game tonight too, scoring three times in the important moments to give the United States the momentum when it mattered. Ashleigh Johnson, who returned in goal for the Americans, made several saves to keep her side with the advantage.

Hungary, while they fell short tonight, can be very proud of the game they played. The result was on a knife-edge, and ultimately the better team on the day won the match. The players after the match were understandably gutted, but received a hugely emotional standing ovation after the match.

In the game, there was not much, aside some individual moments of brilliance from the Untied States, to set these two wonderful teams apart. You felt though, that the United States had a little bit more experience, and the likes of Kaleigh Gilchrist, Maggie Steffens and Rachel Fattal, really gave the USA some calm in an otherwise chaotic setting.

The first quarter was highly competitive. As perhaps expected, the Hungarians were slightly nervy, but the Hungarians got their noses ahead with really good movement from Greta Gurisatti on the right. She peeled away from Denise Mammolito, and finished off a excellent pass by her former Dunaujvaros teammate, Dorottya Szilagyi.

Hungary were defending well, like they did for much of the evening, and initially the United States found no way to feed Ava Johnson at centre.

But when you have the quality of Maddie Musselman, you can score from any scenario. The United States started to look really threatening on the breakaway. She netted twice before the quarter was out. On the first, she was given far too much time and respect, to walk in and shoot. The second goal was on the right hand side, and she finished well from Kaleigh Gilchrist’s zipping ball.

Into the second, Hungary were back level thanks to an outstanding goal from Rita Keszthelyi. She picked up the ball on the top of the arc, and her shot was so precise that Ashleigh Johnson was rooted to her spot, and didn’t even move.

But once more, the Hungarians didn’t learn from their previous mistake, and just allowed Maddie Musselman to walk in and shoot, with her shot finding the bottom left-hand side of Alda Magyari’s goal.

In the next attacks, we saw some outstanding goalkeeping at both ends. Ashleigh Johnson made a superb save from a really powerful Rita Keszthelyi shot from distance, while Alda Magyari prevented Steph Haralabidis making an impact in the game with a smart save.

Greta Gurisatti levelled the game with a man-up move. Parkes did well to turn Ryann Neushul, and the new player of Ferencvaros finished coolly. But the United States maintained their two goal lead at the break, with Maggie Steffens firing home off a classic Kaleigh Gilchrist no-look pop pass to the back stick.

With a lot of attention on preventing the ball into centre, Hungary were giving a lot of space to the American’s on the top. And Ryann Neushul took full advantage of the time she was afforded, picking out a gorgeous lob to put the United States ahead by two goals for the first time.

Greta Gurisatti made an Attila Biro timeout worthwhile to put Hungary on four goals, but Maddie Musselman reached four goals for herself from a controversial 5m penalty that she dispatched well past Alda Magyari  – remaining extremely cool under a lot of pressure from eight thousand Hungarians.

Hungary tried hard to find a way through the American defence, lead by the strong presence of Ashleigh Johnson, but Keszthelyi and Garda both misfired.

With a minute and a half to go in the third period, a real gap started to open, as Alda Magyari couldn’t get enough on a shot from Ryann Neushul – who scored her second of the game from the top right position.

The United States appeared to knock the stuffing right out Hungary when Ryann Neushul netted her third goal that Magyari could only palm into the bottom right of her own goal.

However, the Hungarians were roused by the occasion, and a great improvised score on the post from Zsuzsanna Mate lifted the Hajos crowd.

And Hungary then made it 8-6 with a really stylish finish from Dorottya Szilagyi, only however, after a lengthy VAR review from Boris Margeta. Adam Krikorian was furious that the goal stood, citing the fact that the shot clock had expired, but the goal stood, and it was game on with four minutes to go.

With just a minute to go, Hajos erupted when Rita Keszthelyi rifled the ball past Ashleigh Johnson to make it 8-7 – and it was just as well that she did, as Alda Magyari had made the 25m swim to join the attack, seven on six.

But the experience of Kaleigh Gilchrist won the game for the Americans, with a quick turn, and then swim, to win the penalty from Rebecca Parkes. Maddie Musselman stayed extremely calm, and scored in a typically reliable fashion.

Despite the best efforts in the last attack, the United States kept the ball, and won the World Championship for the Seventh time.

Rebecca Parkes (Hungary) – “I think our defence was really good, we lacked a bit in attack, Ashley does a great job in goal and the American defence adds a very hard way to score goals there. It was amazing, awesome this crowd, especially for Women’s water polo, its perfect. Obviously we really wanted to win, and give it to the crowd too but also Silver is great. I am happy, but id be happier with the Gold. We get two weeks off, and then we start preparing again.”

Attila Biro (Hungary) – “The difference was the experience. The US is a much more experienced team, they have a lot of finals whereas we have our first final in the last few years. But I am very content with this performance, it is fantastic with supporters and fans, its a celebration. This world champs we had the chance now, but we will never get this chance back. But of course, next year world champs again, and this August European Champs – with different opponents. But we had to win and play a little bit tonight. But I do not care for the European Championships in August. But this was a huge celebration of women’s water polo, these two weeks were fantastic ambience and fantastic circumstances. Everyone should be proud, even the losers and the winners to play in front of these fantastic supporters”

Ryann Neushul (United States) – “I am super excited. This is one of the most winning women’s water polo team in history, and so just to be part of it, and to be part of the journey is incredible. But it felt incredible, any opportunity to play with this team is once in a lifetime. To get an opportunity like tonight, I will remember it for the rest of my life. In this programme, everyone is a fighter, you fight just to be on the team, just to play, and all the fighting that it took you to get there prepares you for the match, and the competition.”

Adam Krikorian (United States) – “This one I will remember forever. This one is extra special because of the place we did it in, and the crowd we did it in front of. Its not every year that you play in a world championship final and face the team that are hosting the tournament, in a place where champions played, legends of the game. It is a pinch me moment. They are incredibly talented, we are not surprised by it. That was the closest game we have had since they beat us a year ago, people cant forget that. That is an amazing team. They have all the pieces for success. They were physical, and they had great offensive threat – but we were great defensively. To hold that team to seven goals is an incredible feat for us. We were steady. We kept our composure in difficult situation, in a tight game, in front of six thousand people. Our poise and togetherness was quite impressive for such a new group. As difficult as situations can be with us, they don’t rattle us. it is a testament to the leaders in our team, the work that they have put in, their commitment to each other. Sometimes, we are unflappable.”