Andreu beat Feliu to go level on points with Terrassa 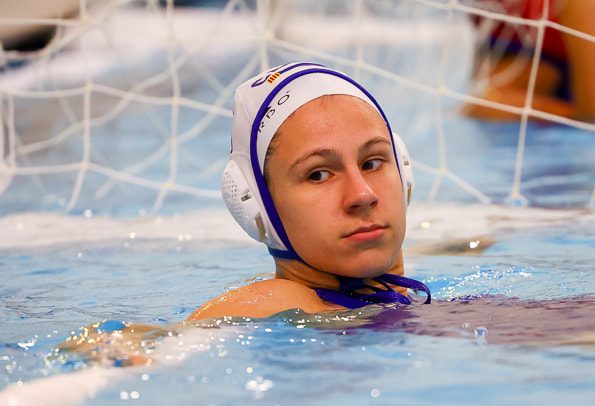 The Women’s Division de Honor in Spain continued this evening with just the one game between two fierce rivals – Sant Feliu and Sant Andreu, with Andreu taking the win in a commanding display.

Having both played last weekend and both secured important wins, the battle of ‘the Saints’ was won with relative comfort by Sant Andreu by 18 goals to 9, thanks to goals from the Dutch Marit Van der Weijden (4), the former Stanford player Hannah Shabb (3) and Ariadna Ruiz Barril (3).

The 30km journey from the North-East of Barcelona to the South-West Barcelona was well worth it for the visitors, with Andreu now level on points with fourth placed side, Terrassa after six games.

Andreu dashed to a really quick three-goal lead in as many minutes – with Marina Cordobes, Ariadna Barril and Denise Mammolito giving Andreu the initiative. Feliu got their noses in the game with ninety seconds to go in the first quarter through Daniel Perez, only for her namesake, Noelia Mora Perez, to strike back twenty seconds later.

The game seemed to balance out when Laura Roca Herrera scored for the home side with their first attack in the second period,  but two goals in quick succession from the American Hannah Shabb, as well as a Ruiz Barril penalty and a Marta Ungria Seco finish put the visitors in the ascendency. It was a Maria Linde exclusion in the last-knockings of the half that gave Feliu their second goal of the day from Bargallo Garcia. Sant Feliu should have had their third goal with five seconds to go, but Paula Abellan Garcia could not convert the penalty gifted to her from Denise Mammolito. The penalty, in a way, summed up Feliu’s evening.

With the spirit of Feliu knocked by the missed penalty, Sant Andreu then had one of their own forty seconds into the third period. Mireia Bargallo Garcia was the guilty offender, and Marina Cordobes made sure she put hers in the back of the net. Despite, however, another goal from Van der Weijden, Feliu rallied and had their best spell of the game – scoring three times (Blanca Reche, Claudia Perez and Lucia Garcia) to pull the game back within four goals.

However, the quality and impetus of Andreu prevailed. Three goals from Marti Van der Wijden and two from Maria Linde in the last quarter put the result out of question and gave Javi Fernandez’s side all three points.

While the loss is a set-back for Jorge Del Tio and his Feliu side, they will have the quality to ensure they are not in a relegation battle. They sit fairly comfortably in 9th after seven games, and thats probably where they would expect to be come the end of the season. Any big motivation they can inspire may be better placed in a few weeks – as their next game is against the league leaders, Astralpool Sabadell.

Andreu, on the other hand, may feel they have a top-four claim on their hands. They are only fifth on goal difference, level on points with Terrassa. Sant Andreu played in the Euro League last season, and that must surely be their goal for this campaign.