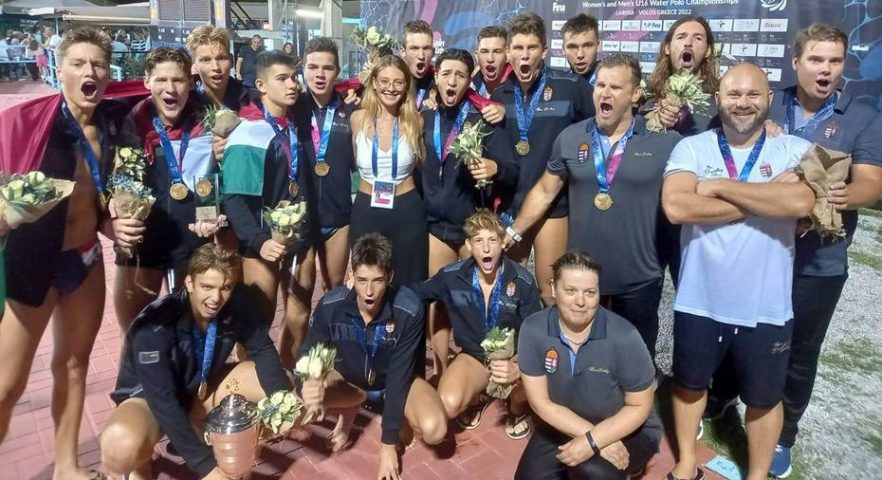 The national team finished 7th in the World Championships in Budapest. That result caused changes in the coaching staff and the team.

But August was a month of Hungarian water polo. The Hungarians won the title at the 5th World Men’s U18 Championships, which finished in Belgrade nine days ago. Immediately after the Belgrade tournament, the 1st Men’s U16 World Championships started in Volos. And the winner was the same. Hungarian boys, born in 2006 and later, clinched the gold medal. 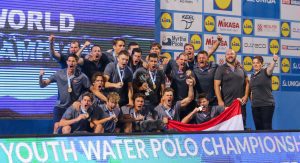 Hungary U18 Photo by Slobodan Sandic/Water Polo Federation of Serbia

Cruise to thrilling final in Belgrade

Before the U18 Championships in Belgrade, Hungary and Serbia were considered the most serious title contenders. Both teams proved that they were heavy favorites. Hungary and Serbia arrived at the final. Each team had a perfect record before the last game (5 – 0). Hungary and Serbia were quite convincing in all matches before the final. They showed that they had prepared for the tournament very well. The final was a spectacle in front of the packed stands. Hungary led for most of the match. Still, the match ended in an 11:11 draw. Therefore a game entered a penalty shootout. Hungary recorded a 16:15 win and made the home team’s fans sad. 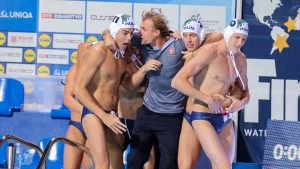 Hungary U18 Photo by Slobodan Sandic/WPF of Serbia

Everything could have a different outcome. Only one shot (one save in the shootout) decided the winner. Many say that luck is a crucial factor in a penalty shootout. But, after the final, Uros Stevanovic, Serbia U18 head coach, said that a penalty shootout isn’t a lottery.

“Congratulations to the Hungarians. They showed the best play throughout the tournament and deserved the title.”, Stevanovic said.

Indeed, the Hungarians, coached by Robert Kovacs-Csatlos, played very disciplined. They didn’t make too many mistakes. Their defense was very tight, and they had a lot of players able to score goals in crucial moments.

Then came the Volos tournament. This was the first-ever World U16 Championships, and there were few preparation tournaments. Because of that, it was more challenging to predict the outcome. The results during the preparations weren’t very encouraging for Hungary. It finished 3rd in the tournament in Zagreb, behind Croatia and Serbia and ahead of Montenegro. Hungary took 4th place at the tournament in Herceg Novi, where Montenegro triumphed, Serbia won silver, and Montenegro bronze. Italy and the Netherlands finished behind the Hungarians.

There were a lot of tight matches in both preparation tournaments. Hungary suffered a few narrow losses, and they learned a lot in defeats. Until Volos, they improved their play.

Hungary, like almost all teams in Volos, had ups and downs in the matches. But, they recorded several comfortable wins and beat some of the favorites on their way to the semifinals. They avoided thrilling finishes in all matches concluding with the quarterfinals.

In the semis, Hungary, coached by David Bisztritsanyi, faced Serbia. That match was almost a replay of the final in Belgrade. It was very exciting, but Serbia dictated the pace this time. The Hungarians were three goals down (8:11), but they came back and secured a penalty shootout (12:12). Just like in Belgrade, one save in the series of penalty shots decided, and Hungary went to the final.

Like in Belgrade, the Hungarians’ rival in the gold medal match was a host. They played against Greece. The home team’s fans created a spectacular atmosphere but they left the pool unhappy. It was another even contest. It seemed that this game would enter a shootout, too, but Hungary secured the win in regular time, scoring a winner with 24 seconds to go – 11:10. 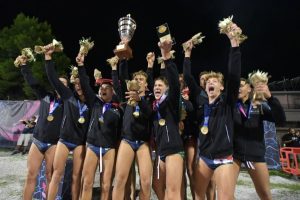 The young Hungarian players proved their talent. Some of them will probably become key players of the senior national team in several years. The rejuvenation of the Hungarian national team has started. Hungary’s new head coach Zsolt Varga, maybe, will invite some of the U18 world champions to the senior team already in the next season. The golden boys from Volos will wait for a few years more.

The generations that claimed the titles in Belgrade and Volos had good results in the last year, too. Hungary was dominant at the 2021 European U15 Championships in Portugal, while it won bronze at the continental U17 championships in Malta.

The department of the Hungarian Water Polo Federation for the cadet, junior and youth ages, headed by Sandor Cseh, obviously works well, but there is no success without good work in the clubs.

In the past few years, Greece and Serbia’s junior and youth teams had similar summer seasons and rows of successes. 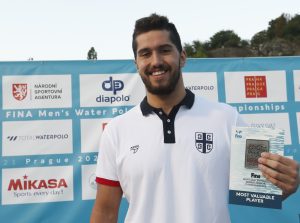 Marko Radulovic, the MVP of the 2021 World U20 Championships, plays for Serbia A team now Photo by Laszlo Balogh/Total Waterpolo

But, a series of summer competitions for the cadet, youth, and junior ages isn’t over. The European U19 Championships will be held in Podgorica in September.

Total Waterpolo Arena will cover the tournament in Podgorica. Live scores and detailed statistics will be available on the 2022 European U19 Championships page.

More articles about the World U16 Championships

Articles about  the World men’s junior and youth championships