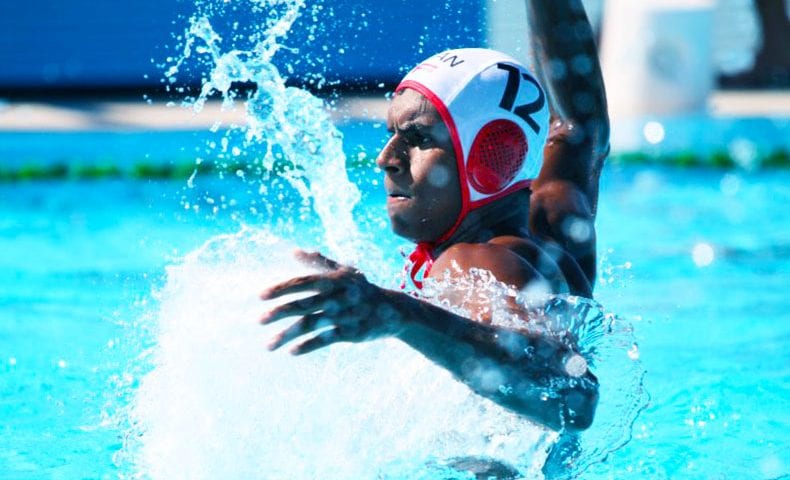 Aidan Roach was the man of the moment for Australia, leveling at 11 and then needing to level again at 12 when he could not find anyone to pass to so he shot with half a second left on the clock.

The Sharks were perfect in the shootout and goalkeeper Anthony Hrysanthos stopped Japan’s fourth shot.

In the other Group A match, Canada gained a first win, beating South Africa by a staggering 18-4. South Africa’s outside shooting was impotent compared with a day earlier against Japan. Head coach Paul Martin explained that the style in Perth was totally opposite from what they play domestically.

Kazakhstan took the lead of Group B with a second win, this time dispensing with Argentina 11-5 in what was seen as a lop-sided match. Much was expected from Argentina following its penalty shootout victory over China on day one.

China bounced back from that upset and took out New Zealand 14-7. Canada converted five from 10 on extra while New Zealand gained none from five, a telling statistic.

The women had the morning off and played four straight matches in the afternoon-evening.

In Group A, China opened proceedings with a solid effort over New Zealand in a high-scoring match — 21 goals in the first half — cruising to 24-7 with Zihan Zhao netting six action goals. China was perfect on extra-man attack and the only blemish was a blocked penalty shot in its five attempts.

World League champion the United States of America turned on a display of speed water polo against Japan, winning 18-7 with captain Maggie Steffens being named the of the match.

In Group B, Canada defeated Kazakhstan 13-4 with Hayley McKelvey (CAN) bringing her tournament tally to nine with four goals. Host Australia sent off South Africa 21-3 with far too much experience and pace.

Canada rebounded from its narrow loss to Australia on Tuesday with a resounding victory built on power and freedom to move. South Africa performed brilliantly against Japan on Tuesday, but poor shooting and bad defense cause the score to mount in Canada’s favor. Canadian head coach Pino Porzio was happy with the effort and everything went to plan.

What worked brilliantly was Jeremie Cote’s shooting arm. He netted a hat-trick in the first quarter, nabbed a fourth in the second and finished with a pair in the fourth. Loose marking on him made a huge differenced to the margin. Eight players scored for Canada, showing the depth of players and will prove useful in the latter stages of the event

Africa kept up with the Canadians around the pool, but not close enough. Poor shots were taken from poor body positions, worrying about Canadian counters. The big conversion rate on extra helped considerably.

China notched its first victory of the six-day tournament and can take heart from some positive play and excellent shooting. New Zealand played a vastly different game from yesterday when it pushed Kazakhstan all the way. The Kiwis came second in the major foul count — 12-5 — and China caned them with six extra-man goals and a penalty score.

Head coach Davor Carevic refused to comment officially on the state of the match. It was a largely static match and the application of the new rules affected New Zealand more than China. Petar Porobic saw the match as a step forward and a good return from the previous day. China led 5-3 in a promising first quarter and took the margin to four by halftime.

The Kiwis won the third and let the match slip in the fourth. There is little evidence of the new rules generally, although the free throws are quicker and less whistling by the referees, while zone play cuts down some of the exclusions.

Kazakhstan secured a second victory and looked a class team and better than Tuesday’s 12-11 win over New Zealand. Argentina provided the opposition for the first period and allowed Kazakhstan to slip out to 4-1 and close the half at 6-3. The margin pushed to nine in the third period as Argentina had a penalty shot blocked and Kazakhstan also missed.

In fact, there were three penalties awarded in consecutive attacks. Kazakhstan eased through the final quarter in a match that seemed littered with exclusions and a stunning 18 advantages not converted. Roman Pilipenko, a veteran of the Kazakh team, slotted four goals.

China stepped up a notch after losing 11-5 to the States of America on day one by defeating New Zealand 24-7. The first half alone kept the match secretary busy with 21 goals. New Zealand was up against it from the start yet was unfazed and played strongly throughout. The Kiwis drew level at 1-1, but China swiftly moved to 5-1 before finishing the quarter at 8-3. Six straight goals in the first five minutes of the second half had China way out in front.

New Zealand slipped in consecutive goals for 14-5. However, China had the drive, the skills, and the firepower, especially from the deep-wing players. China needs close marking and the accuracy and speed of delivery were evident at every turn. Long-standing star Zihan Zhao was in top form with six goals, including the last two. China had five penalty goals attempt, missing one while converting all five extra-man attempts, the first team to do so in Perth, men or women.

The United States of America played two different styles in beating Japan. In the first half, it was all speed, fast drives, swift passing — all within the spirit of the new rules. The USA made opportunities from nothing by darting around the offensive zone with skillful individual tactics. This mirrored the Japanese style, but the USA was better at it and led by two at the first break. The USA intensified the play in the second and boosted the margin to eight by halftime. At 15-4 by the end of the third, Adam Krikorian was rotating players and giving every opportunity for players to express themselves.

The style might have changed a little and the shots hitting the bar or going over the top. Japan was equal to the task and when it came to extra-man conversions, netted three from four. The USA shot at 50 percent. The style of the game was energetic and exciting and the fact that only 11 major fouls were whistled says a lot about the recent changes. Yumi Arima was her usual forceful self, drilling balls from outside and collecting four goals.

Canada thoroughly earned a victory over Kazakhstan with excellent defense proving the key. The scoring came as a result of the defense. That and the brilliance of Hayley McKelvey, who followed up her five-goal haul against Australia on Tuesday with four more goals tonight. Her third came after she rebounded her shot from center forward and her fourth from well out at the left-hand-catch position.

Canada went to 5-0 before Kazakhstan responded and 10-1 by the end of three quarters. To the Asian team’s credit, it drew the final period with the final long shot down the middle by Anastassiya Yezemina for her second. There was energy plus from both teams with plenty of movement, although Kazakhstan struggled to get the ball decisively to the strike zone in the early stages. It appeared Kazakhstan was too static but changed as the coach urged them on.

The Aussie Stingers had plenty of pace and potency on the attack. Counter-attack proved fruitful as was snappy passing and an abundance speed. The whole team toiled for the victory while South Africa was left in its wake. South Africa had two penalty strikes in its tally, missing another.

The experience of Rowie Webster, Zoe Arancini, Isobel Bishop and Keesja Gofers combined well with relatively new faces or those with minimal international exposure. Lilian Hedges performed admirably in goal when South Africa was given some space to move. The Stingers frequently denied South Africa ball, stealing at will. It was Australia’s second win while South Africa gained more experience against the team that claimed silver in last year’s World Cup.

Both teams faced off in Brisbane in January with the Aussie Sharks winning twice, lone by the narrowest of margins. Joe Kayes opened the scoring for Australia, matched by Yusuke Inaba. Australia was denied a certain goal at 1-1 when the ball crossed the line and was signaled a goal by a FINA official. However, the lead referee said it did not cross the line. Japan then went to the lead with a fine counter-attack goal by Keigo Okawa. A controversy of sorts followed at 5-2 when a Blake Edwards shot appeared to go over the line, without the goal judge’s support. However, the other referee awarded it. The fourth Aussie goal was spectacular in that Nicholas Brooks’ won the swim-up, flicked the ball back, kept swimming and received the ball to swim up and beat the advancing Japanese goalkeeper.

Lachlan Edwards (Blake’s brother) had his hat removed at center forward, but nonchalantly turned and scored a slider for 6-2. Kayes closed proceedings for 7-2 with a center forward backhand shot while heavily defended. Inaba opened the second half with a 6m free throw that rocketed straight down the line. He repeated the dose for 7-4 a minute later. It became more interesting when Mitsuaki Shiga fired in from the deeft for 7-5. Kayes struck again for the Sharks from about five meters in front at 4:21 in the third. The match was alive. With two minutes remaining Japan goalkeeper Katsuyuki Tanamura was ejected for holding on to the ball.

The cross pass to Kayes slipped off his hand as an open goal beckoned. Brooks made sure from the left-hand-catch position for 9-5 at 1:17. With three seconds remaining, George Ford bounced off the water into the bar, losing a chance for a five-goal margin heading into the last eight minutes. Japan earned a penalty at the start of the fourth, but goalkeeper Anthony Hrysanthos blocked Shiga’s shot. Atsushi Arai converted extra-man attack soon after and the match was at 9-6. Japan was getting on a roll with Shiga narrowing to two.

Blake Edwards responded on extra from the deep left. Arai on counter extra man, Inaba with a penalty goal and Mitsuru Takata at the four-meters line and Seiya Adachi from the same position almost had Japan 11-10 ahead — 6-1 for the quarter. The Sharks went to a timeout, but the subsequent shot smashed into Tanamura. Japan lost its attack and Australian gained an exclusion at 1:40 and Aidan Roach fired into the bottom left for 11-11 at 1:18. Koppu latched on to a rocket cross pass at 0:58 for the 12-11 lead. Tanamura stole the ball off center forward Kayes and Japan used the time until 6.1 seconds.

The ball shot up the right to Roach who wanted to pass but reacted to the screams of the crowd to bounce the ball into the goal with half a second remaining. Japan had the shot. but it went wide and the match went to penalty shootout. Australia sealed the match with five straight goals while Inaba had the fourth Japanese shot blocked by Hrysanthos.