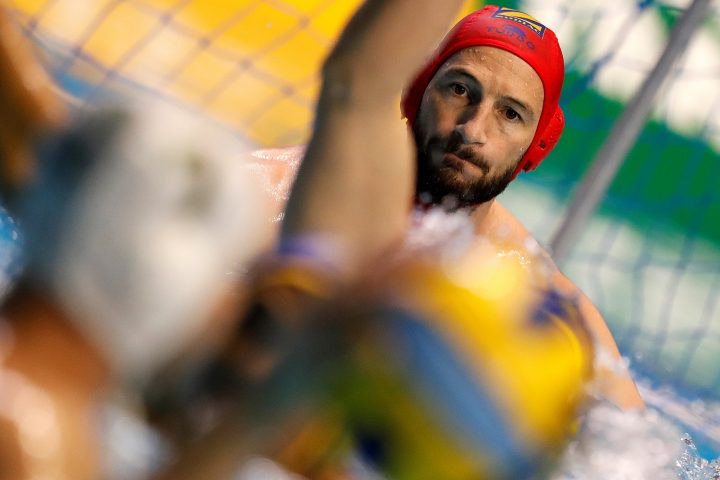 Several derbies were on the schedule of the 10th round in the Champions League Group A. Visiting teams recorded wins in all four matches. There were a lot of goals in each of the games.

Water polo lovers in Budapest expected they would enjoy an exciting game between former European champions Ferencvaros and Barceloneta. But, the match was a one-sided contest. Barceloneta blew Ferencvaros away – 17:7.

The group leader Brescia suffered the first loss in the season. Novi Beograd beat the Italians in Brescia – 16:13, although one of its aces Dusan Mandic was excluded at the beginning of the game.

There were two encounters between former European champions in this round. The other offered more excitement than the match in Budapest, but a favorite recorded a win. Olympiacos defeated Jadran in Split (16:12).

Radnicki was better than Dinamo in Tbilisi (17:13)

The results of the 10th round caused many ups and downs in the rankings. Brescia is still in 1st place (23 pts), but 2nd-placed Novi Beograd is just three points behind the leader (20). Olympiacos is in 3rd place (19). Barceloneta climbed to 4th (17 pts), while Ferencvaros dropped to 5th place (16 pts). Radnicki returned to 6th place (10 pts), Jadran is 7th (9 pts). Dinamo, which had been out of the race for the F8 before today’s matches hasn’t won a point yet. Radnicki and Jadran practically are, also, far from the final tournament.

Barceloneta had almost the same “recipe” for a win in Budapest as in the match against Radnicki two weeks ago. In the 9th round, Barceloneta had an 8:0 advantage at halftime of the match in Kragujevac (the final score was 9:3)

This evening, Ferencvaros, which played without Denes Varga, couldn’t find its rhythm. The Spaniards shocked the rival in the opening minutes, just like they did in Kragujevac two weeks ago. After less than two minutes, Barceloneta had a 2:0 lead. The hosts reduced the gap midway through the first period (2:3). Barceloneta answered with a 3:0 series and jumped to a 6:2 lead. Jansik stopped the visitors’ run, converting a man-up for 3:6. But, Larumbe closed the first quarter, and the visitors entered the second period with a 7:3 advantage. Barceloneta’s percentage of shots was outstanding in the first eight minutes (7/9). 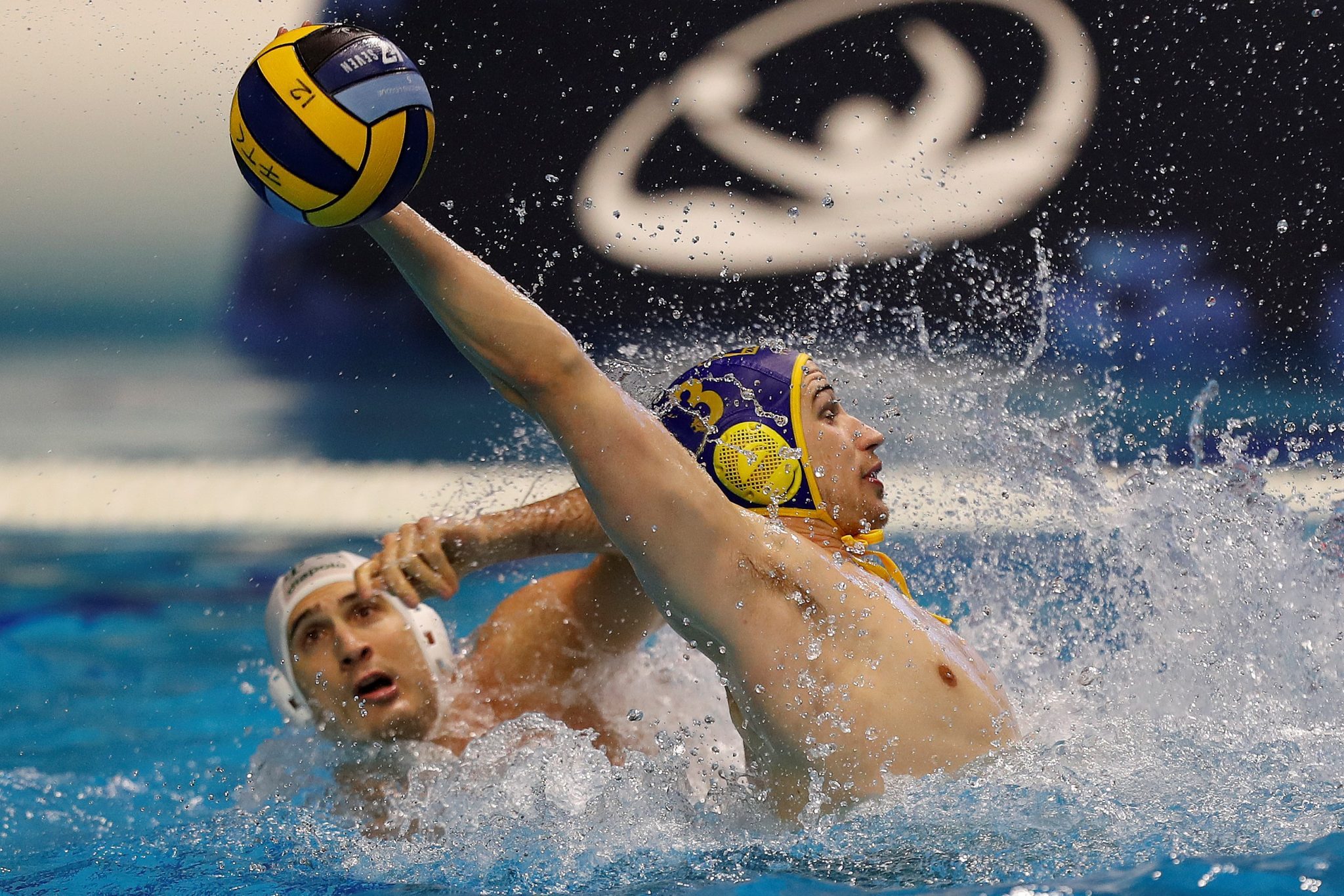 Ferencvaros’ coach Zsolt Varga switched the goalkeepers after the first quarter. Vogel was replaced by Szakonyi. The hosts had enormous support from the fans in the fully packed stands, but it didn’t help them come back. Barceloneta’s defense, commanded by veteran Dani Lopez, who was the starting goalkeeper today, was superb. The Spaniars’ offense, led by Alvaro Granados, continued “bombing” the hosts’ net. The visitors earned a 7-goal advantage (10:3) already in the 13th minute. Barceloneta kept the distance until the middle break (12:5). After the first half, it was clear who would take three points. 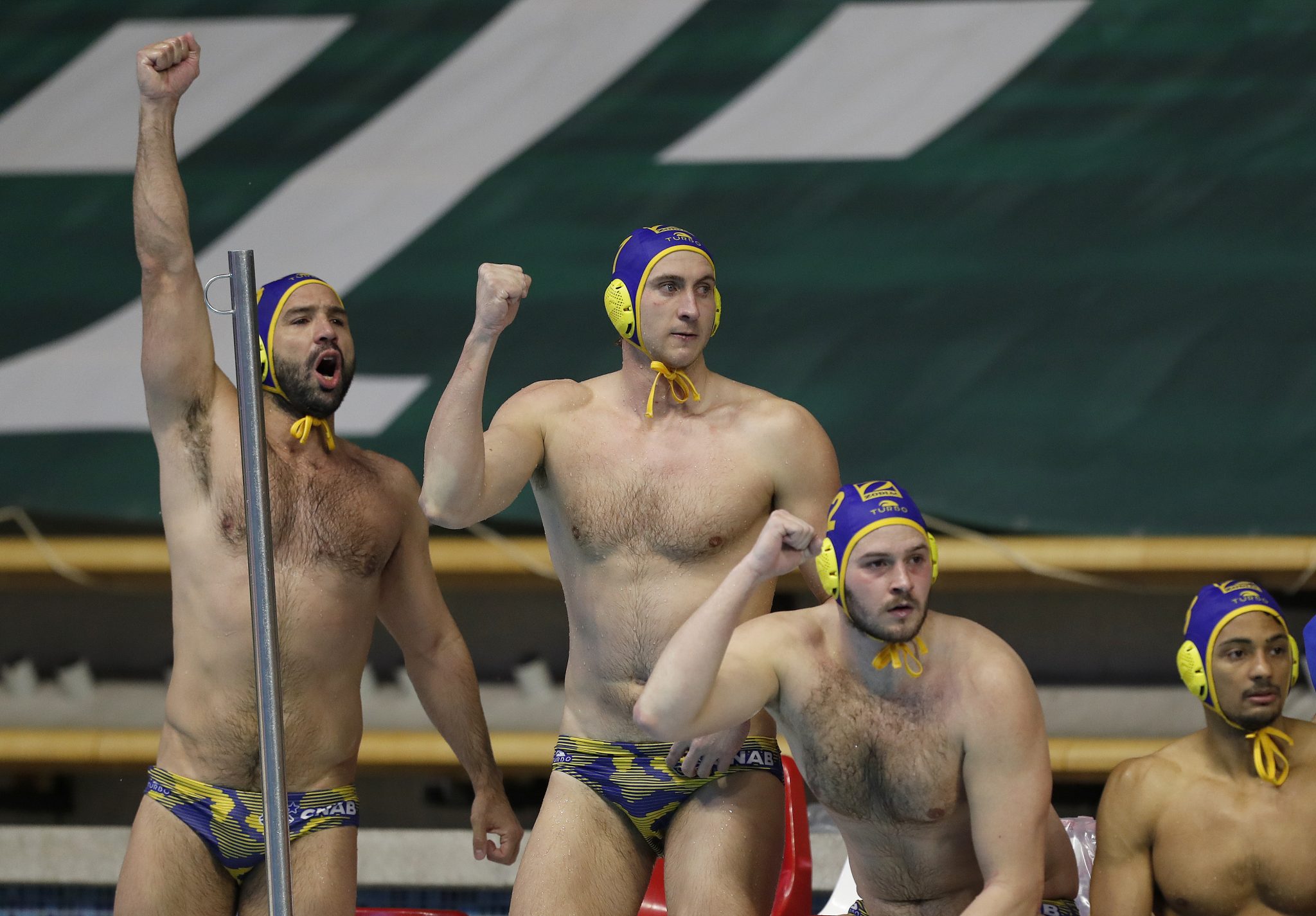 The visiting side didn’t slow after a 3-minute pause. In the third quarter, they increased the margin to nine (15:6). At the end of the game, ten goals separated the rivals.

Ferencvaros, which dropped to 5th place, will have a challenging schedule in the remaining four rounds. The Hungarians will have two away matches (Novi Beograd and Olympiacos), while they will welcome Radnicki and Brescia.

Brescia and Novi Beograd displayed a good water polo. They fought a hard and balanced battle in the first three periods. But, the Serbs outplayed the hosts in the final quarter.

Brescia, which was guided by an assistant coach Edvin Calderara (Alessandro Bovo tested positive for Covid) scored an opening goal. Novi Beograd equalized immediately.But, already in the 3rd minute, Novi Beograd lost its captain Dusan Mandic. He was excluded with substitution (he was red-carded after the second personal foul). The visitors had to continue without one of their best players. Still, they kept up with the opponent. The game followed the same pattern in the first and second quarters. Brescia took a one-goal lead seven times, and Novi Beograd equalized shortly after each of these goals. In the 15th minute, Dolce scored from a penalty shot for 8:7. But, Novi Beograd didn’t level at 8:8.

Brescia doubled an advantage in its first possession in the second half. Olympic champion Djordje Lazic scored from a rebound, after Gojko Pijetlovic’s save (9:7). That was followed by a new exchange of goals. Brescia led 11:9. The Serbs halved the deficit, and it seemed that Brescia would enter the final period, with an 11:10 lead. But, just 15 seconds before the buzzer, the Serbs earned a man-up. Strahinja Rasovic found the net with five seconds remaining, and the rivals started the final period from the same starting point (11:11). 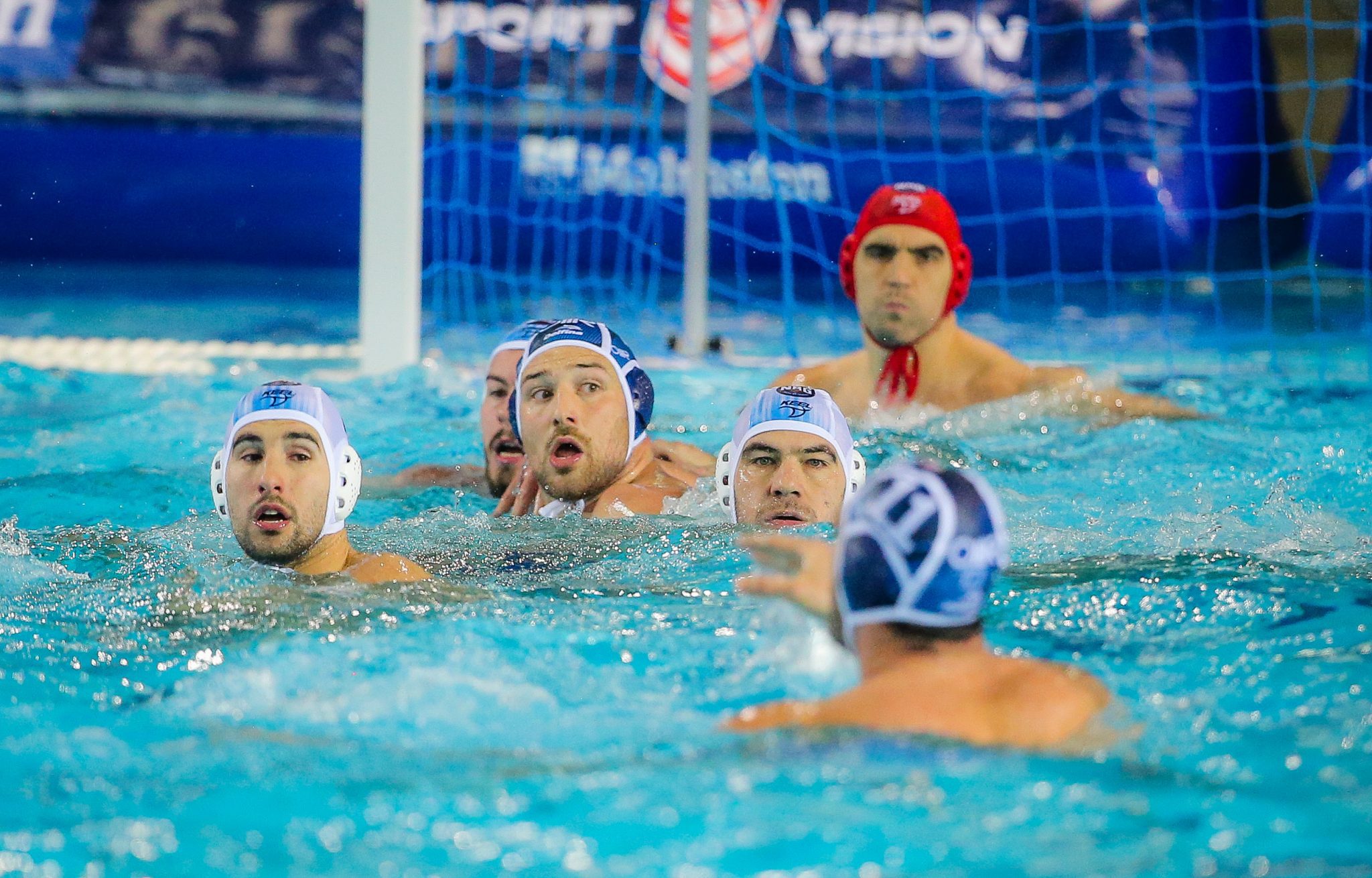 The visitors kept their momentum after the last break. Strahinja’s younger brother Viktor Rasovic opened the fourth period with an excellent action goal from a distance. He put Novi Beograd in front for the first time – 12:11. By the middle of the fourth period, Novi Beograd earned a 3-goal lead – 14:11 (Dusko Pijetlovic scored his 5th goal, and Strahinja Rasovic added his 2nd). That 5:0 series was crucial for the visitors’ victory. Novi Beograd didn’t let Brescia make a comeback.

After two losses in a row (to Brescia and Radnicki), Olympiacos returned to the winning track. The Greeks opened the match very well, but they needed a lot of time to break the Croats’ resistance. Defenses were up to the task in the opening minutes. Jadran’s Andjelo Setka broke the deadlock in the 4th minute. However, Olympiacos answered with four goals in a row and went to 4:1. Thirteen seconds before the first pause, Marinic Kragic scored for Jadran 2:4. 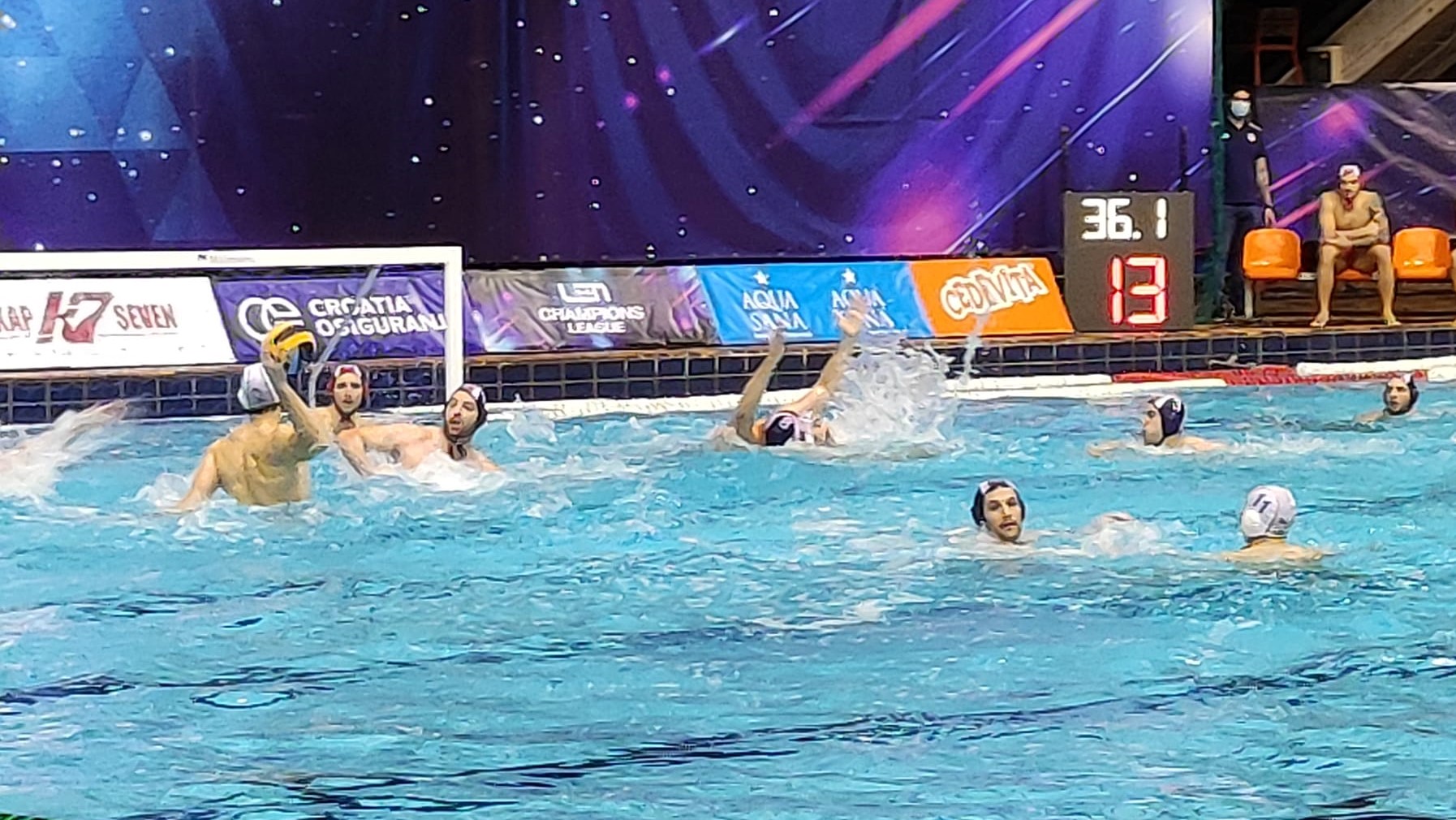 The second period was balanced. Midway through the quarter, Jadran cut the deficit to one goal twice (4:5 and 5:6). But, after the fifth goal, Jadran couldn’t find the net for more than seven minutes, while Olympiacos scored two goals for 8:5. Konstantin Kharkov boosted Jadran’s hopes with an action goal in the 19th minute (6:8). Shortly after, Konstantinos Genidounias replied with two goals in 44 seconds (10:6). The Greeks maintained a four-goal difference until the last break (12:8). Early in the fourth, Filip Filipovic converted a penalty shot to a 13:8 lead, and there was no way back for Jadran. 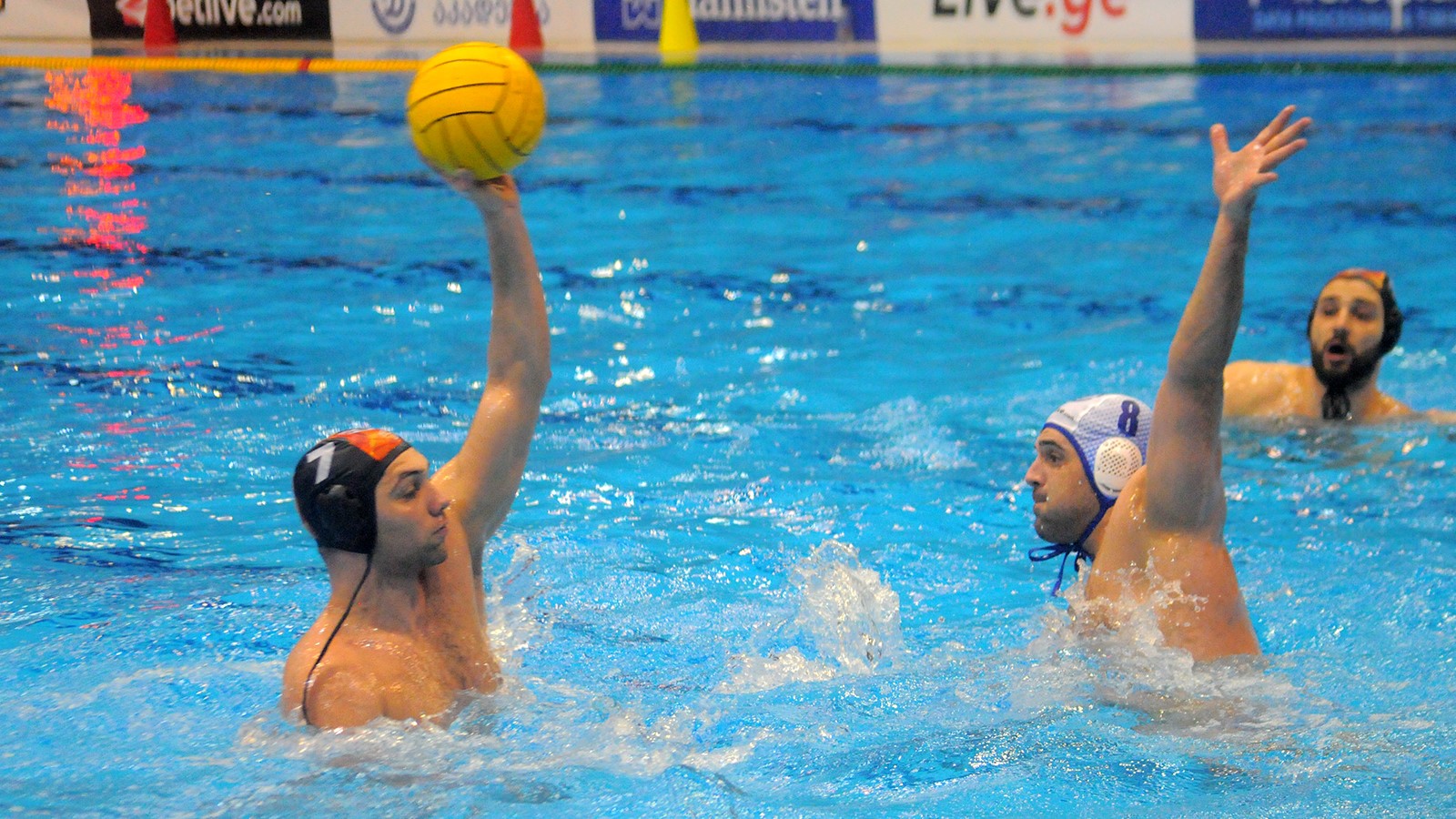 Radnicki recorded its third win in the 2022 Champions League. Dinamo couldn’t take revenge for a 7:14 defeat in Kragujevac. It was an interesting game, despite the fact that Radnicki led from the beginning. After five minutes, they had a 5:2 advantage. In the middle of the second period, the Serbs built a 4-goal lead for the first time (10:6). The visitors had a 15:10 lead before the final eight minutes. Dinamo didn’t give up, it fought hard until the end, but Radnicki controlled the match.