Beach Water Polo on the Rivers of Utrecht, Netherlands! 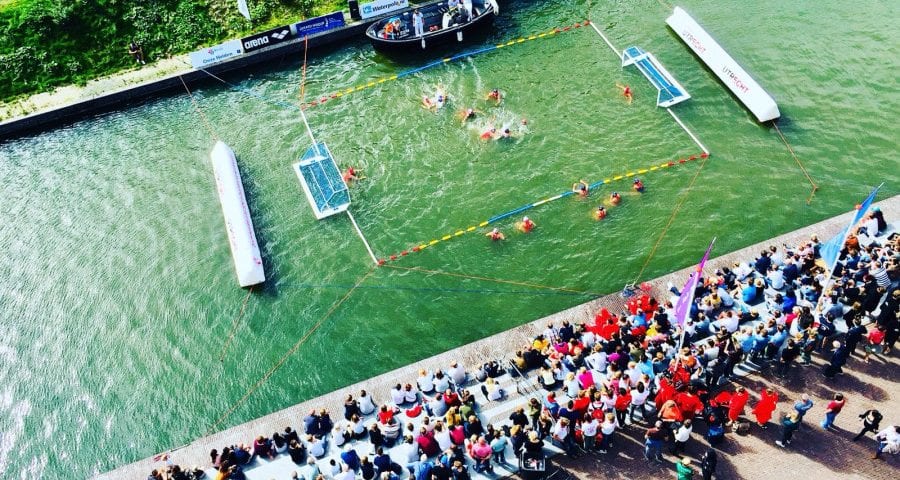 Last Sunday, in Utrecht (Netherlands) the September sun welcomed another beach water polo tournament. This was the first competition of this sort to visit the Netherlands and about a thousand spectators responded.

This smaller but faster version of water polo was new to the Dutch audience. Utrechtse Zwemclub-Star-Combinatie (UZSC), a Dutch water polo club, demonstrated this concept to water polo fans under the leadership of Andy Hoepelman, reports Waterpolo.nl.

Since there wasn’t a beach nearby, the teams settled for the newly constructed canal at the Tivoli-Vredenburg music theatre. Close to the water polo playground, on Friday, ‘King of the Court’ volleyball competition was organized, which drew even more publicity to the beach later.

As for the future plans, everyone is expecting the redo in 2019. There’s even an idea to demonstrate the sport in the 2024 Olympic calendar. But let’s leave the ideas for now and get back to the tournament.

How was the reception of the competition in Utrecht? The reactions of both the teams and public were favorable. De Watervlo and UZSC played in girls’ category, ZVL and UZSC in women, Polar Bears and UZSC in men’s, and De Robben and UZSC played the masters.

Andy Hoepelman was the main initiator in FINA in the Netherlands for this kind of sport. At a FINA conference, he recently unfolded his plans and they were enthusiastically embraced that the following year summer is already on show at the World Cup in South Korea.

“We made it happen since there was interest and, of course, thanks to the Utrecht municipalities,” said Hoepelman. “People were enthusiastic and the atmosphere was great. We were also happy with the weather and there were more people than in the standard tournaments.”

“It’s also nice that FINA believes in this too. I hope this kind of water polo will spread across the world. The playground is free to play in, and it’s on the open, which attracts more visitors.”

He then pointed out the advantages of playing outside. The first and major one was that playing indoors was both expensive and couldn’t be played anytime, anywhere. In addition, he added that traditional water polo is popular in only a few continents. The main reason, he said, is in its availability and expensiveness. 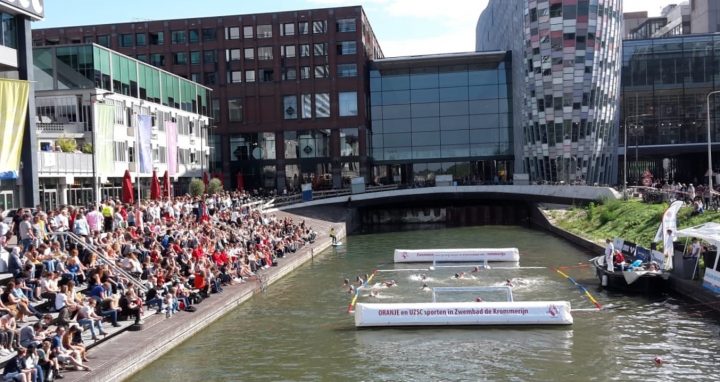 Mike van den Brink, the captain of UZSC, talked about his experience after playing a game.

“It is very nice to promote the sport in the heart of Utrecht. As far as I am concerned, next year we should organize the games in the canals throughout the city. In fact, I only missed two things this year: half liters of beer and hot dogs!” he said referring to the organization.

On the subject of the future of the competition, Brink commented:

“Yes, it’s fast and flashy, but so is futsal and futsal is not an Olympic sport either. Big scores are fun, but what does the public get when it turns 22-10? Are these kinds of matches interesting to watch?”

The Future of Water Polo?

Jan-Bram van Luit, Polar Bears coach, also had a word for the media:

“I believe in it. But it’s not about whether I believe in it or not, we’re all going to have to! This sport is more popular with each new season because it’s played for fun. I think it shouldn’t stay only in Utrecht. I’ll recommend Polar Bears to buy an inflatable field, then we will invite teams and play a lot of matches. And that could be the future!”