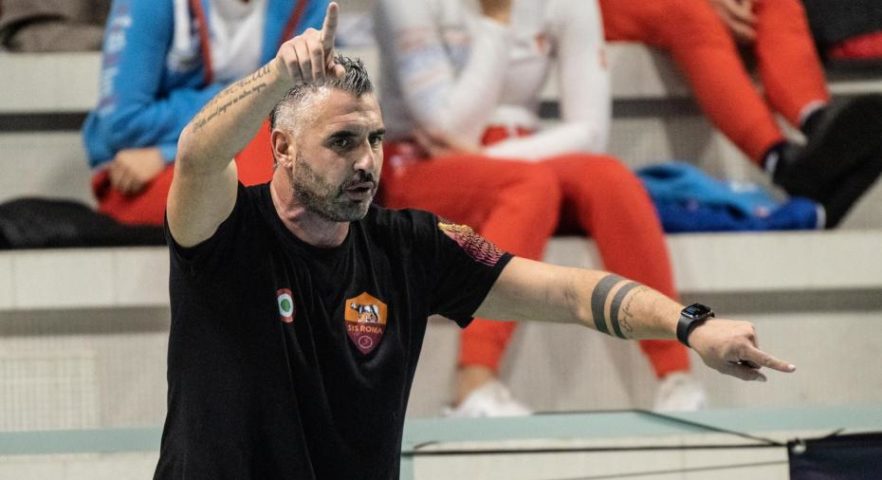 Roma have the ‘special one’.

No, not Jose Mourinho, Marco Capanna.

It was Mercedes Steiber, the current BVSC head coach, who gave SIS Roma’s forty-one year old women’s head coach that nickname while the two became acquainted during her five years playing under Capanna at Imperia.

The nickname has stuck.

While Marco Capanna is certainly far less contentious and far more reserved than his Portuguese counterpart, the two coaches certainly share an unrelenting hunger for success.

“We all called her ‘Roberto Baggio’ for her immense quality, and she started calling me the special one. Mourinho has definitely brought incredible enthusiasm and imagination to the fans in Rome.”

And at the turn of the year, Capanna has much to smile about heading into the second half of the season. His team sits at the summit of the Italian A1, winning all seven league games, including an impressive 11-7 victory over title rivals, Plebiscito Padova.

“It was definitely a very good start to the season, but I’m not impressed because we worked for it. I believe, and the girls are aware of this, that we still have a lot of room for improvement, and that what we are doing now is still not enough for our big dreams.”

Dreaming big is certainly on the menu for the Italians in their quest to win their first Italian Championship in their history, but for Capanna, a linear view of success is not helpful.

“In the utmost sincerity, I can say that we are ambitious, determined in every single training session. We are dreamers, but we do not talk about what we must win. We certainly go into the tank to always try to win with everyone. If you succeed, and if I have not miscalculated, you could win some titles.” 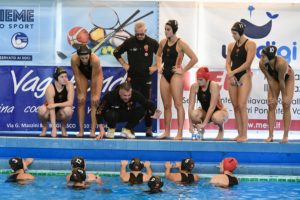 SIS Roma during their 10-5 victory against Bogliasco earlier this season. Photo (Giorgio Scarfì)

Roma are not only on a hot streak domestically. They have carried their rich vein of form into the Champions League, where they finished top of their Champions League group ahead of title holders and Greek giants, Olympiacos. According to Roma boss, the Italian Cup winners of last season were not phased by the calibre of any of the opponents they could face this season:

“We had an extremely difficult draw on paper, but we prepared it with the idea of finishing first. Vouliagmeni had staffing problems for COVID but showed great organisation and spirit. De Zaan put Olympiacos in great difficulty and expressed quality and intensity, and Olympiacos themselves should always be respected and faced fearlessly with great care. The girls were good and knew that if they always worked with curiosity to take what ‘we lack’ they could go down in the tank with awareness regardless of the opponent.  Now the quarterfinal draw puts us in front of Sabadell , another super team and club, but we will be ready for these fascinating quarter-finals.”

Drawing Sabadell in the quarter-finals will no doubt be a tough task, but January provides some other stern tests for the side from the capital, including a vital league clash against reigning Italian champions, Ekipe Orizzonte:

“They are important challenges, but they don’t have all our attention today. There are other games; on the 7th we are going to Bologna, and every day has great value. We will definitely prepare a game plan, with care for the characteristics of the opponents, but above all, we will focus on ourselves and the management of the game. There will be moments of difficulty with these teams, and we will have to be prepared to face those moments.”

The ‘Giallorossi’, or the ‘Yellow-reds’ are no doubt benefiting from the improvement in results for the Setterosa. Six of Roma’s players are mainstays in Carlo Silipo’s national team, but the Roma coach can’t speak highly enough of his players:

“We have a very young team with good individual quality. The work they do on the national team is quality; the attempt, as always, is to put the athletes in the best conditions to grow individually in every aspect. They have extraordinary consciousness and commitment and are maturing quickly. All the athletes in this 18 group that we have brought in this season are important.”

But three of Capanna’s players in particular are catching the eye at the moment, each in their own way.

Their captain, Domitilla Picozzi, has massively stepped up her game this campaign:

“(Picozzi) is the captain and an example for the young women of our club. She’s serious, a perfectionist, ductile, and imaginative in the water. A true master of reading the game.”

Domitilla Picozzi, Roma’s captain, has been in excellent form over the last few months. Photo: WP Inside

Roma’s Chiara Tabani is the league’s leading scorer, but in her coaches eyes, it’s her versatility as a player that makes her such a valuable asset. Capanna explains, “In modern water polo, it is essential to have players who can double as an arc player and a centre player.”

“In that respect, Tabani is a tactical joker” he adds.

As referenced in our recent feature, a third player, nineteen year old Sofia Giustini, is also emerging as a rising star in Italy.

“Although she is still young, Sofia knows how to interpret the game in all its forms. She’s good on the passing line, an excellent swimmer, and has quality in directing and finishing.”

A player himself for a quarter of a century, Capanna made his name as a player and a coach at Imperia. As the women’s head coach, he went on to win the Italian Championship in 2014, two LEN Trophies in 2012 and 2015, and the LEN Supercup in 2014.

Capanna is now very much at home though, 600 km north of Imperia in the Italian capital. With the Yellow-Reds, he has already won two Italian Cups (2019 and 2022) and hopes many more are on the way. 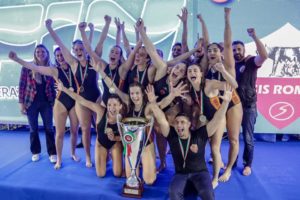 But as the cliche goes, Rome wasn’t built in a day.

For the former Imperia and Cosenza player, any success Roma may enjoy boils down to  creating the right environment for his players:

“I consider myself lucky. I do the job I love, and I’ve found a place that allows me to do it in the most serious, ambitious way possible. We are in a historic moment that gives double value to the seriousness of my club. I would like to create a young, mentally-minded, winning Roma who has a stamp of character and plays at all levels, with a nursery that works to get to the first team and has the girls who are now tracing the ground as their idols.

I like being hungry every day that we show up for training, with the respect that a group must have internally. This staff has the value to build all this together. I have no doubts, and this will help.”

There is no denying that Roma has been in fantastic form this season, and they have a real shot at winning their first Italian championship and possibly more.

Capanna has a long-term contract until 2026; but could this be the year his new Roman empire experiences its first major triumph?