The press conference on the occasion of the 2020/21 Champions League was held in Belgrade today.

The tournament starts tomorrow with the quarterfinal games—more information and facts about the F8 you can found in our today’s preview.

Water Polo Club Novi Beograd (New Belgrade) is the host of the tournament, along with the Water Polo Federation of Serbia. The games will be played in the Sports Center “11 April” The indoor pool of this center is named after Vlaho Orlic, one of the best coaches in the history of water polo in Serbia and Yugoslavia.

“I’m sure all of us feel that playing in Belgrade is special, this place you always see serious water polo. Now we face a short but very tense competition where everybody speaks about the first day. That’s true, the impressions, sensations we can get in the first game have a real affect on the following ones. It is a pity we cannot share this show with the fans but I hope it will change in the future.”

Pro Recco’s left-handed goal-getter Dusan Mandic has played many big games in Belgrade as a player of the Serbian national team and Partizan. He won the 2011 Champions League playing for Partizan and moved to Recco a few years later.

“It is a great honor and pleasure for me to play such a big competition in Belgrade. Unfortunately, this time without the spectators, but I hope that will change next year. The competition will be interesting. We are going from day to day, from match to match. It is difficult to predict who is the favorite because everyone has shown advantages and disadvantages throughout the season. Let the best win!

Karsten Seehafer, Hannover coach, underlined that his team was happy to be in Belgrade and to be able to play against the best teams in Europe.

“This is the easiest situation for us as we have nothing to lose, we are classical underdogs. We have a good team and very good players and perhaps I can see a great team effort tomorrow.”

Aleksandar Radovic, Hannover’s player, who clinched the 2011 Champions League with Partizan, as well as Mandic, said:

“We had a goal in this season, to make the Final Eight, and we achieved that. Now we are in a good position and we will fight till the end while giving our best tomorrow.”

Titleholder Ferencvaros will face Marseille in the second match of the day. That will be a replay of the 2019 LEN Super Cup. Two years ago, Ferencvaros recorded a 14:10 victory.

But the Hungarians aren’t so big favorites this time. Zsolt Varga, Ferencvaros coach is aware of that fact. In his opinion, at least seven teams can win the tournament

“I’m really sorry for the year lost for several reasons, one of them was that we had a really great team. At the end of this season we will try to give our best but we had a lot of problems, not only Covid but also injuries, but the infections and the post effects were the most serious which also influenced our performance in the last months. Here I see at least seven teams which can win this tournament and that’s a good so we can hope we will enjoy three great days of water polo.”

“Unfortunately this year we won’t have spectators in the final – in next two years we expect to have the fans back. For the coming days I hope for the best.”

Milos Scepanovic, Marseille head coach, was a goalkeeper of this French club two years ago, when Marseille won the LEN Cup. This season, he debuted as a head coach.

“Actually, I think we took an extra path in the Champions League and it’s a great success for our club to make the finals. We want to achieve something more but we face great teams, great rivals so we can get a clear picture on our quality and that’s good for the future. I think this is really a great way to continue our journey at this level of water polo.”

“I am pleased to be in the final tournament again after the break. I believe that everyone came with the ambition to pass to the next phase, so do we. I believe we can advance to the semifinals and have a successful tournament. 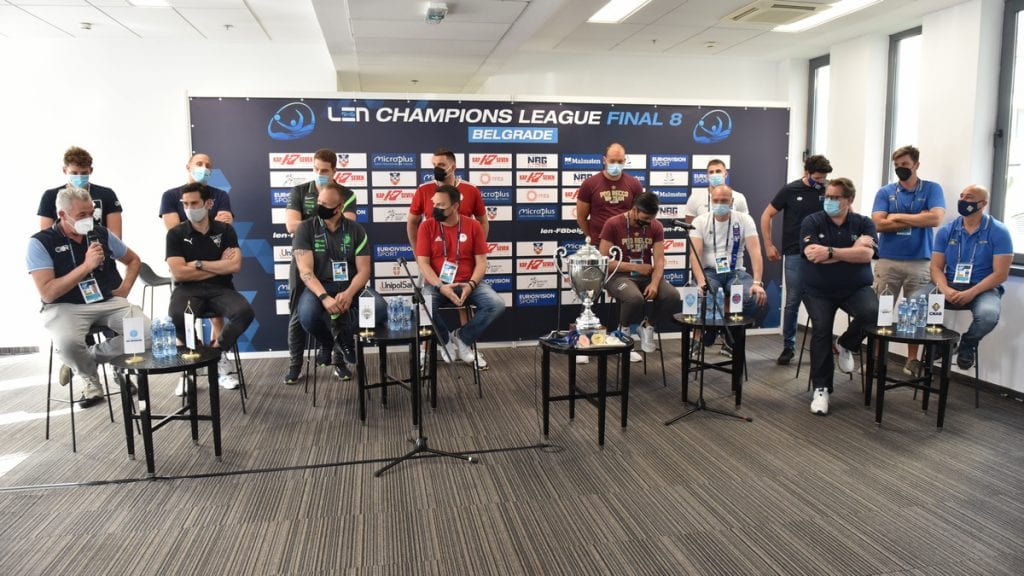 Jug and Brescia will face off in the third quarterfinal.

Jug coach Vjekoslav Kobescak led the Dubrovnik-based side to the 2016 Champions League. Earlier, he won the trophy as a player of Mladost:

“I think this is the most important tournament in the season, too bad that we won’t have any spectators but hopefully we have lots of fans next year. I think there is no favorite team here, which is good, especially for the fans who love water polo. We lost three finals this season but I hope we have the chance to improve and perhaps win this trophy.”

“I think everyone is in really good shape at this stage since we have all been waiting for this tournament. We heard many positive things from the others spoke before me so I just say, I hope our team is going to be the winner.”

Brescia arrives at the F8 as the champion of Italy. Alessandro Bovo, the head coach of the new national champion:

“To be here is very important for us. We are very happy for our results so far, tomorrow we try to show our best since for us this is the fourth time in the Final Eight but we always lost on the first day before, including games against Barceloneta in Barcelona and Recco in Genova. Now I hope that tomorrow it will change, we can play a bad game but hope to win it.

“I’m glad to play in Belgrade, the city where I was born and started to play water polo and it’s also great to have this event here in New Belgrade. We have the highest ambitions but we need to take a step-­‐by-­‐step approach and all players in our team share that.”

Barceloneta and Olympiacos will close the first competition day.

Barceloneta head coach Chus Martin, who leaves the club after the F8, expects a hard match in the quarterfinals:

“Many thanks for the city of Belgrade to organise this final, it’s not easy to host an event like this today. In the most important match we meet a very difficult opponent Olympiacos, finalist in the last two editions. We try to do our best to reach the final, though this competition is not easy but we should be ready for this challenge.”

Milan Aleksic,Barceloneta’s player, was also born in Belgrade, and won the 2011 Champions League playing for Partizan:

“I think we are having an excellent season and we are eying the highest prize here. First we face Olympiacos, I strongly hope we can win that match.”

Theodoros Vlachos, an experienced head coach of Olympiacos and the Greek national team:

“We are happy that we can be here since this season has been really hard for the clubs, this is the fourth bubble, it’s not easy for anyone. We reached the final three times in the last four years and based on our experience I should say that it is the first day which is really the most important. If you win, you can dream on with the trophy – and I hope we can win tomorrow.”

“We are preparing for these games all year. In our first match we play with one of the greatest teams Barceloneta – I hope we have the best of luck tomorrow and I wish that for all the other teams.” 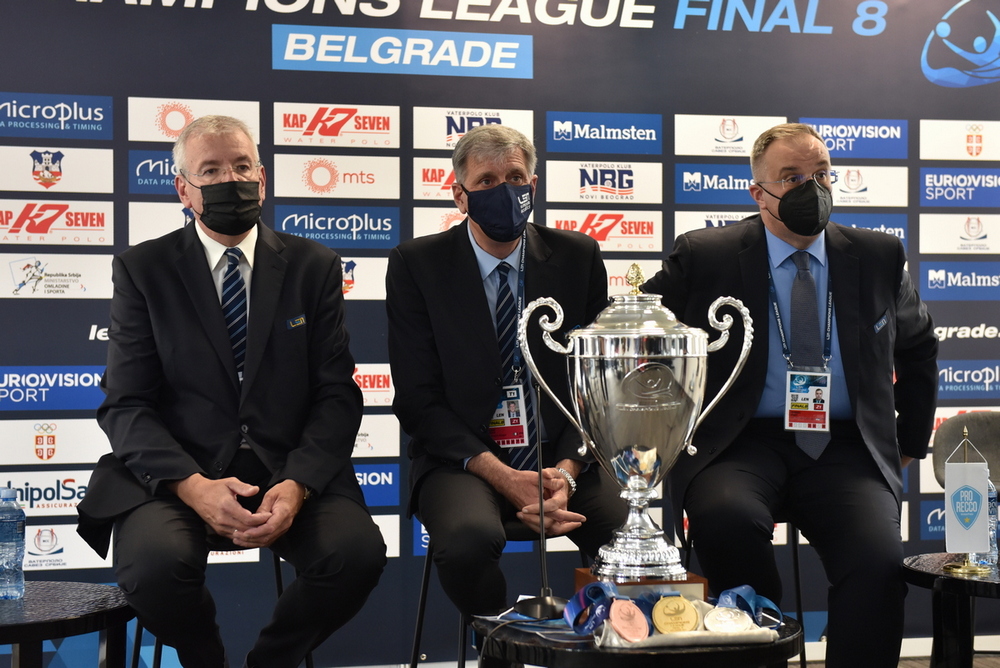 There will be no spectators, but Marco Birri, LEN Operational Manager said:

“It is estimated that more than four million people around the world would watch games on TV only confirms how much attention the world public pays to this sport by water polo fans around the planet.”

“I am grateful to the Water Polo Club Novi Beograd, which made a great effort to organize a tournament like this. It was not easy, but the club leaders did everything to host the best eight teams in Europe in Belgrade. I am sure the fantastic matches will be played in Belgrade,”