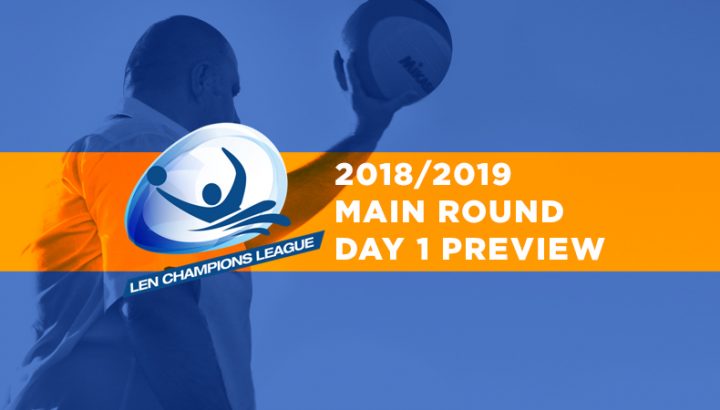 Another season of tremendous excitements is set to begin on Wednesday when the Champions League main round kicks off with eight encounters. The rematch of last May’s quarter-final between Barceloneta (ESP) and Eger (HUN) and the clash of a newcomer, last season’s Euro Cup finalist BPM Busto (ITA) and title-holder Olympiacos (GRE) are definitely the games to watch on Wednesday.

In Group A both Italian teams Recco and Brescia are about to launch their respective campaigns with a win as they are the favorites in Belgrade (SRB) and Bucharest (ROU). The other two encounters seem to offer much more thrills: the clash of Barceloneta (ESP) and Eger (HUN) is a rematch of the Final Eight quarterfinal from last May. That time the Spaniards beat Eger with ease (9-4) and at home, they might repeat this as the visiting side has been reshaped a bit and opted to play with a younger line-up after several key players left Eger.

The other Hungarian team, Ferencvaros will play with Dynamo (RUS) upon their return to the big stage after 17 years. The Budapest based side triumphed in the last two editions of the Euro Cup and by signing up more aces in the summer market they’ve become a pretty strong F8 contender this season. Though the Russians also had some great games in the previous edition and almost made the finals in their first season.

Group B will produce some action-packed matches with the winners of the last three editions (Olympiacos, Jug, Szolnok) coming together. Add two more Croatian and German sides (one, Hannover is the host of the F8 next May so enjoys an automatic berth, leaving three more for the others), plus Euro Cup runner-up BPM Busto (ITA) – and the scene is set for outstanding excitements.

On Day 1 perhaps the title-holder’s visit to Verona stands out. BPM Sport Management is an absolute newcomer in the Champions League and upon their premiere, they have to face the mighty team of Olympiacos – a mouth-watering pairing.

The two new entrants from Croatia will also have some hard task as Jadran Split opens its quest in Szolnok (HUN) while Mladost plays against Hannover. Another Croat v German duel is due in Berlin where Spandau tries to upset Jug.

Just as in the past season, LEN offers free live streaming from each game and as a novelty, every goal will be available for replay in the live-scoring application which can be downloaded to smartphones and tablets from the dedicated website.

“Now this is the real start of Champions League. This upcoming game against Moscow is very important for us. Dynamo is known as a really massive team, playing hard, a physical and good water polo. We want to win the first match.”

“First of all, we congratulate all teams with the start of Champions League new season. For our first game, we will come to Budapest to play against an absolute favorite of this competition FTC Telekom but we are to get pleasure from this match.”

“We begin this Champions League after the arrival of Brescia and Ferencvaros. Clinching one of the first four positions will be a major challenge, especially because of the high standard of the group in this phase of the competition. When the tournament kicks off with Eger, all our efforts will be focused on gaining three points. A start like this would give us the much-needed motivation for the following games, and we can also count on the support of our fans, which is always very important. Several changes have been carried out to the Eger side, and although we beat them 9-4 in the quarterfinals last May, each new game brings up new challenges. We must be especially focused because we know they are going to put up a tough fight.”

“Barceloneta is a really strong team, especially at home. I am so happy that our first match will be against the Spanish team because at the beginning of the season it’s maybe easier.”

“We will start with a little handicap, taking into account that we will play the first official game of the season on Wednesday. On the contrary, Brescia has already played five games in the Champions League and also started the Italian League. Having eight new players in the team and some unexpected injuries in the last period, our mission became even more difficult than it would normally be when you meet a solid team like Brescia. I am convinced that my players are willing to make a great game especially those, the majority, who will play their first main round match in the Champions League.”

“As every debut in the most important tournament, this game is fundamental and we absolutely want to start the right way. It will be a tough challenge, we don&#39;t know much about Steaua but we have to think of ourselves and do our best.”

“Tomorrow we’ll face an organized team, ready for the battle and they know what they have to do in the water. Compared to Saturday’s match against Bogliasco, we’ll have to increase the quality of our game, especially in offense.”

“Split has come from the qualifying rounds, which does not mean they are a weak team. They have started building their team, and the young and the experienced players make a good mix. Their defense is particularly strong and their offense has improved a lot recently. The most important of all is that they are a strong and tough team. As for our team, we are not ready yet, we need time to reach our good shape. Without a doubt, we want to kick-off with a win in our home.”

“It is a great privilege to play in the LEN Champions League. Jadran Split hasn’t played at this level for 24 years and we are all thrilled to be one of the 16 teams in this year’s competition. Our first opponent is Szolnok, a strong team with a lot of good individuals like Andrija Prlainovic, Gabor Kis… It is a big challenge for my team, but we will try to get most out of that game. I spoke with my players, they can play without the pressure… We had problems ahead of this season since our city pool Poljud is undergoing renovation, and it wasn’t ready for use on time, so we have trained in Kastela, Makarska… We even played playoff round against Jadran Carine in Zadar. But, we overcame all the obstacles and now Jadran is ready to play.”

“On Wednesday we have a very hard and difficult game. Our opponent is a group of very good individuals that make a good team. They have good players from all European countries. Brguljan, Giorgetti, Jokic, Real and an amazing goalkeeper are just part of this amazing team that doesn’t have weak spots. I hope that we will belong in the game like in chess play and turn it in our favor till the end.”

“Every season is one step forward, one level higher. We have nearly the same team like in the last season, completed with Giorgetti and some young players. We will try our best.”

“It will be a great match against one of the strongest teams in the world. They have been playing together for many years, last season they had a great result and this year they have added some more good players. I think that they will be even stronger than last year. For us, this will be ‘one of those nights’ that will teach us a lot.”

“We are facing a new season… a new challenge for my players. We want to stay on the top and our effort starts in Italy, against a team that came from qualifiers with two great victories. We have to fight in their home and stay focused and effective. The first game of a competition always hides many difficulties, especially when you play away.”

“While playing with Jug we will face one of the strongest teams in Europe. For us, it is the first game this season and therefore we will see where we stand. I hope we will be a strong opponent for Jug. Most of the players had a good performance during the World Cup. I hope that we are able to transfer some of that to the upcoming tasks.”

“Both Jug and Spandau are teams having played in the Final Eight a few months ago so we know it’s going to be a hard game, especially when you play in Berlin. We still didn’t get in right form because of our late start of preparations, but I believe that we will come back to Dubrovnik with three points from Berlin and that will mean a lot in the competition.”