Croatia and Italy to play for 5th place in Belgrade 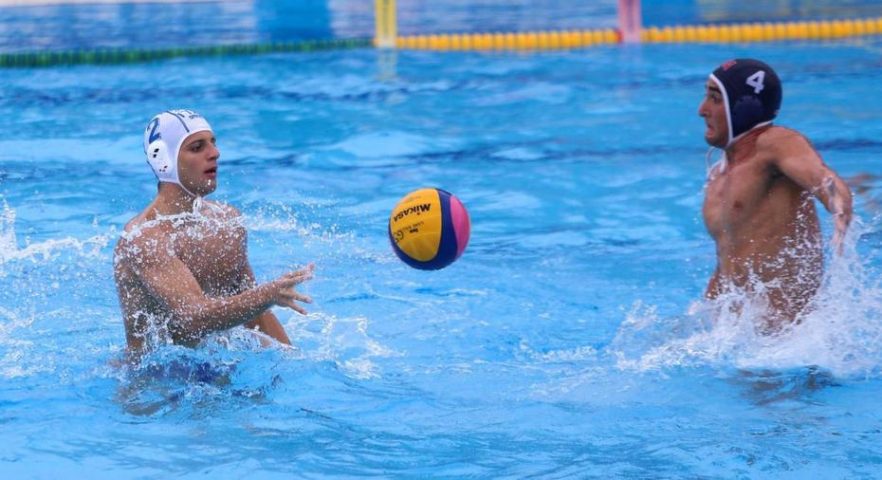 Photo by S.Sandic/WPF of Serbia

Croatia and Italy will play in the 5th-place match at the FINA Men’s World U18 Championships in Belgrade.

In the first semifinals for the classification 5th-8th place, Italy defeated Greece in a flood of goals (19:15). Croatia beat Montenegro 11:7. A good defense in the second half was a key for the Croats’ victory.

The games for the final classification between 9th and 16th places were held in the morning session. The USA finished in 9th place, ahead of Canada, Australia, Kazakhstan, Turkey, New Zealand, Brazil and South Africa. Uzbekistan and Kuwait finished their participation yesterday – Uzbekistan in 17th and Kuwait in 18th place. 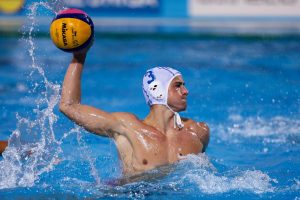 Italy and Greece didn’t care much about defense in the first semifinal for places 5th – 8th, and the match turned into a scoring festival. Italy scored two goals in the first two minutes (2:0). In the following minutes, Grece leveled at 2:2, 3:3, 4:4, 5:5, 6:6. Italy went to 8:6, and from that point, on, it was always in front. Greece chased the rival, but Italy kept an advantage. The “Settebello” earned a 5-goal advantage with 02:31 minutes remaining on the clock, and everything was decided, despite the fact that even five goals were scored in the last 02:04 minutes.

Croatia held Montenegro goalless for more than 16 minutes, and that was decisive

.
The first half of the duel between Montenegro and Croatia was a rollercoaster. Croatia led 2:0 and 4:3. Montenegro took control in the middle of the second period. It netted three straight goals for a 6:4 lead. Janovic scored the 6th goal for Montenegro at 00:48.

But, the Montenegrins didn’t keep the momentum. Seventeen seconds before the middle break, the Croats started coming back, after Patrik Kolak’s goal with an extra player. 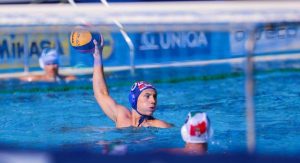 Kolak added two goals in the third period (an action goal and the penalty shot). The Croats went ahead – 7:6. Toni Radan closed the quarter with another power-play goal for 8:6. Montenegro struggled, tried to come back. However, Vito Cicero killed their last hope by converting a man-up (after Kolak’s assist) for 9:6 in the 27th minute. In the remaining time, Croatia added two goals. Nedjo Bastrica scored a consolation goal for Montenegro 18 seconds before the final buzzer.

Patrik Kolak, who found the net five times, was instrumental in Croatia’s victory.

The opening minutes of the North American derby saw a balanced battle. Canada scored an opening goal, Team USA turned around to 2:1. Canada equalized at 2:2, only to see the Americans scoring seven unanswered goals for an  9:2 lead. By the end, the USA, which was a favorite here, increased the margin to 17. 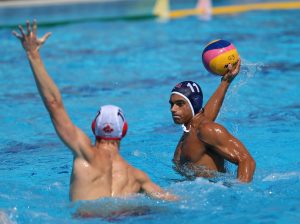 If we take a look at the statistics, the goals after personal fouls made the big difference. Team USA  had a very good percentage of extra player shots (12/17) and converted three penalty shots (3/4).

Australia had ups and downs during the tournament in Belgrade (more downs than ups). But, the “Aussies” were too strong for the best Asian tournament in the Championships. Kazakhstan, which had one player fewer on the roster (one player was suspended due to a red card in yesterday’s match) needed almost three quarters to found the net. The Asians scored their first goal in the 24th minute (1:16).

Turkey, the only European team that didn’t reach the quarterfinals, finished in 13th place. New Zealand led just once – 7:6 (18th minute). The Turks answered with a 4:0 series and earned a 3-goal advantage for the first time (10:7). They maintained the difference until 12:9. New Zealand scored the last two goals in the game and came very close (11:12), but it was too late. The 11th goal came 16 seconds before the end. 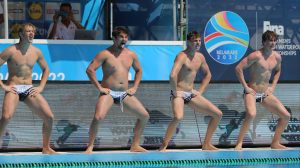 Haka on the edge of the pool

Despite the loss, the “Kiwis” weren’t very disappointed and were eager to show their tradition. They said goodbye to Belgrade with a  ceremonial “haka dance”, which is practiced by many national teams from this country. Haka, which comes from Maori culture, has become widely known primarily because of the rugby team of New Zealand. Just before the players’ dance, their fans (parents, cousins,etc) performed haka in the stands. 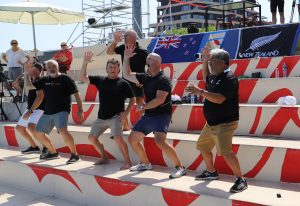 Haka in the stands

In the middle of the second quarter, the score was 4:4. Brazil produced a 5:0 run (three goals with an extra player and two from counter-attacks) in the next 12 minutes, jumped to 9:4. That series was crucial for the outcome.