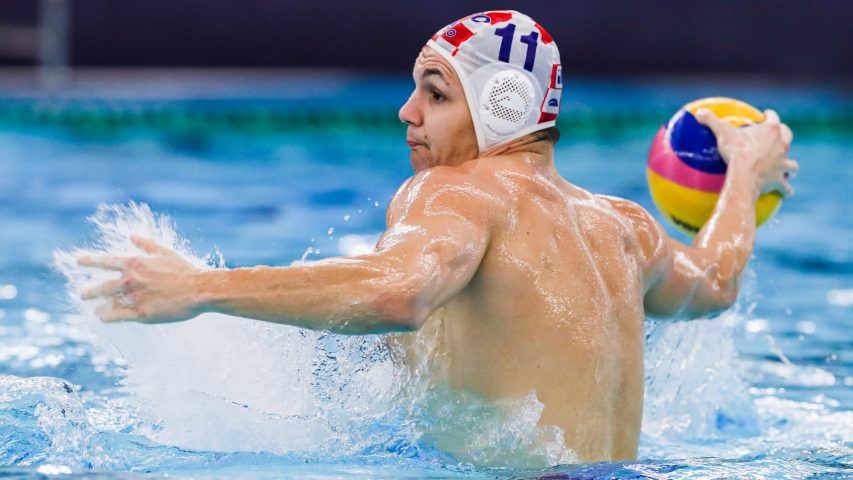 The Croats, who beat Greece in the first round, now secured 1st place with six points and earned a spot at the final tournament of the European Qualification.

Besides the game in Zagreb, two matches were played today.

France upset Spain  – 14:11 in Reims in the first match of Group B (the game of the first round Germany – France has been postponed)

Italy beat Slovakia easily in Trieste – 22:3 (Group C), and qualified for the Final Eight. Slovakia will host Serbia in the last round. Whatever happens in that match, Italy can’t drop to 3rd place. Only a miracle in that match can prevent Serbia to secure the quarterfinals, along with Italy.

There were no matches in Group A. Hungary and Montenegro already qualified for the F8.

Spain, which played without Felipe Perrone, opened the match in Reims well and earned a 4:2 lead. France caught up with the rival early in the second quarter (4:4). Spain went in front once more (5:4). After that, France responded with three straight goals and earned a 7:5 lead. The hosts maintained a 2-goal difference until the last break and entered the final quarter with a 10:8 advantage. The Spaniards halved the deficit to twice (9:10 and 10:11). But, France responded with a new 3:0 series. A minute and a half before the end, the hosts jumped to a huge 14:10 lead and secured the points.

France proved that it has been improving its level of play as the Olympic Games in Paris are approaching.

Spain hosts Germany in the next round. That will be a must-win match for the 4th-placed team at the Tokyo Olympics. Everything in this group will be open until the middle of March when the postponed game of the first round Germany – France will be played.

World champion Italy and Slovakia aren’t in the same weight category, despite the fact that it played with a rejuvenated squad. The hosts dominated from the first whistle. Slovakia’s last goal came in the 11th minute (3:7). In the remaining time, the visitors didn’t find the net, while Italy netted 15 and cruised to a 22:3 victory.

Italy lost to Serbia on Day 1 (9:12). It’s most likely that Serbia and Italy will go to the quarterfinals. Slovakia will secure a spot in the quarterfinals if it makes a miracle and beats Olympic champion Serbia with a big goal difference.

Croatia was the favorite, but nobody expected the hosts to have an easy task. Last year, Russia beat Croatia in the group stage of the Olympic Qualification Tournament. The two teams met again in the bronze-medal match in the same competition, and the Croats recorded a win after a dramatic penalty shootout (25:24).

Both teams have been rejuvenated since Rotterdam, but the Croatian squad suffered more changes. Russia kept most of the key players (except Konstantin Kharkov, who will play for Croatia).

Russia stunned the favorites in the first half. The visitors played excellently in defense and well enough in attack. In the seventh minute, they earned a 4:0 advantage. The Croats got on the scoreboard just 33 seconds before the end of the first period when Luka Bukic scored from 6 on 5.

The Croats started coming back after the first break. Each of the Croats’ shots in the first four minutes of the second quarter hit the target. They reduced the gap to one goal – 5:6 in the 12th minute. Shortly after, the hosts earned a penalty shot and a chance to equalize. But, Luka Bukic missed – a post blocked his shot. In the next possession, Konstantin Kiselev converted a man-up. The Russians re-took control. Roman Shepelev scored an action goal 46 seconds before the middle break and the Russians rebuilt a 3-goal advantage (8:5).

Five minutes and 32 seconds before the end of the third period, Nikita Dereviankin netted a nice power-play goal to give Russia a 4-goal lead 9:5. But, it was Russia’s last goal in the game. The Croats’ scoreless phase lasted for 9:24 minutes. Loren Fatovic broke the Croats’ silence with a goal from a penalty shot in the 21st minute. A minute and a half later, Croatia forced another penalty shot. Loren Fatovic sent the ball into the net once more and made it 7:9.

The Croats, finally, found their rhythm. Goalkeeper Marko Bjac boosted his teammates’ self-confidence by a series of very good saves. However, Russia didn’t surrender. In the 26th minute, Rino Buric netted an action goal for 8:9. The hosts equalized only 02:51 minutes before the final buzzer – Bukic scored an action goal for 9:9. A minute later, Buric put Croatia in front, scoring a goal in the last second of the attack. In Russia’s next possession, Buric blocked Merkulov’s shot, and the Croats started a counter-attack. Fatovic was fouled, and the home team earned the fifth penalty shot. Fatovic took responsibility for the third time. He hit the back of the net for 11:9.

After that goal, the Croats managed to kill Russia’s man-up (Bijac saved a shot from Kholod), which was the end of the contest.

Budapest was determined as a host of the Final Eight, but reports say that the Hungarians gave up the organization,