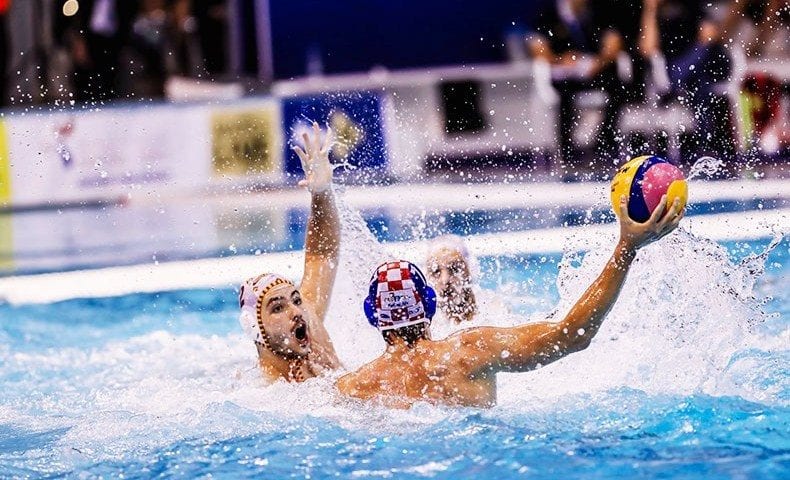 After a couple of big beatings last year, Hungary stroke back to beat the Italians in the first semi-final of the World League Europa Cup finals in Zagreb. The Magyars came from behind to clinch the game 12-11 while offering some of their usual magic. They will face Croatia which managed to outpower Spain in the closing minutes, netting the last three goals of the game after 9-9

This sets up a rematch of the 2017 World Championship final. While the finalists already booked their spots in the Super Final, the battle for the bronze between Italy and Spain is going to be a crucial clash as only the winner can make the trip to Belgrade. In the matches played for the 5-8th place, Montenegro downed Russia with ease while Serbia overcame Greece in the second half, so the two powerhouses will battle for the 5th place on Sunday.

After suffering two huge defeats in 2018 – their embarrassing 5-12 loss was the biggest ever in the 82-year European Championships’ history – Hungary was regarded a bit of an underdog against the Italians. And even though the Magyars did a fine job against Montenegro, shortly before the game they lost their first center-forward Balazs Harai due to injury, which seemed to have weakened their line-up.

However, they showed their best to compensate this and offered some sparkling attacking water polo with a of movements and fast swimming. The Italians still seemed to be the dominant side but as the Magyars kept coming back continuously, they somewhat lost their edge at both ends, missed a couple if fine opportunities while they couldn’t prevent their rivals from making the most of their chances.

It was a game of twists and turns, Italy led 4-6 and 6-8 but the Magyars could level the score both times, and towards the end of the third they could take the lead for the first time, thanks to a double netted in a span of 22 seconds. Italy missed a penalty early in the fourth and the Magyars soon went 11-9 up with Denes Varga magical shot (he got his second MVP award in two days) but now the Settebello could strike back to go even with 1:46 remaining. However, a brilliant individual effort from Krisztian Manhercz 58 seconds from time won the game for Hungary.

Croatia staged a great finish to beat Spain in a tremendously heated battle. The world champions seemed to be dominating the game, however, the European silver medallists stayed close for most of the time. In fact, they had a great start and took a 2-0 lead but soon the hosts geared up and turned the cards to go 3-5 up.

The Spaniards responded well and brought the match back to even by half-time (5-5) and from that point. it was a balanced game. The Croats went ahead three times in the third but the Spaniards always offered a fine answer so it was still equal before the last period (8-8). There another exchange of goal promised a thrilling finish but after 9-10 the Spaniards failed to convert their 6 on 5 and an immediate punishment from Loren Fatovic (counter, penalty, goal) virtually closed down the contest, he then added one more so Croatia had a 3-0 rush in the final three minutes while Spain was unable to score in the last 6:23 minutes.

In the games played for the 5-8th places, Montenegro was clearly the better side against Russia, they scored a handful of nice goals while setting a single-game scoring record so far in this weekend by stopping at 15 goals. Greece could keep up with the Serbs until half-time when it was all even (8-8), but in the second half, the Olympic champion side tightened its defense and allowed two more goals for the Greeks and restored some pride after their surprising defeat in the quarters.

Italy had two fine wins over the Hungarians in 2018, both games were really – exactly a year ago they downed the Magyars 10-5 in the Europa Cup finals, followed by a 12-5 thrashing at the Europeans, Hungary’s worst-ever defeat in the history of the continental championship. The Magyars showed a definitely better here in Zagreb against Montenegro, however, a last-minute injury to their best center-forward Balazs Harai definitely weakened their chances. Italy also had some struggles against Russia, though it was still a better outcome than a year ago when they suffered an embarrassing defeat against Spain in this event’s first day in 2018.

The opening eight minutes saw a more or less balanced battle though Italy seemed to be more in control, netted two extramen goals two fine action goals but the Hungarians were also able to create some nice chances even though they were less effective in the center (and their remaining quickly got two expulsions).

It stood 4-3 after the first period, then came a brilliant action goal from Francesco di Fulvio but Marton Vamos’ blast virtually stormed through the goalie’s hand. Italy’s drives worked however, another choreography reset their two-goal lead but they failed to put away a man-up and Szilard Jansik powered himself in front of the goal and netted another action goal. Soon it was 6-6, another Italian 6 on 5 gone, at the other end the Magyars showed patience to find the best option from their extra. They could have even taken the lead but Denes Varga’s ball didn’t cross the line and at the end, Vincenzo Renzuto’s great one-timer found the back of the net for 6-7 and the Hungarians couldn’t make their next extra either.

Those two misses seemed to have been costly as di Fulvio scored a brilliant goal from the wing for 6-8 early in the third, but the counters still worked for the Hungarians and Denes Varga kept his team close with another action goal. Italy wasted another man-up while Varga sent the ball home from a 6 on 4 after Nicholas Presciutti had been red carded for a rougher foul. saved a dying man-up by scoring in the very last second of their possession for 8-9, then missed one while the Hungarians could equalize with some luck as Toni Nemeth put away a rebound with 23 seconds remaining from the third. What’s more, the Italians messed up their attack, the Magyars launched a fast counter, earned a penalty and Denes Varga buried it with 1.2sec to go – for the first time Hungary was in front at 10-9.

A penalty would have helped Italy to go even right in their first possession but di Fulvio blasted it over the bar, then the Magyars had on overplayed 6 on 5, however, next game Denes Varga’s usual magic as he pulled one in while being back to the goal – with 4:35 to go Hungary led 11-9. Blocks denied the next Italian man-up, Hungary could have gone three up but they were unable to make their 6 on 5 this time either. And Italy came closer as finally Echenique scored from an extra (after a time-out) and next also went in, Figlioli equalized for 11-11, with 1:46 to go.

But Hungary wasn’t done, Krisztian Manhercz beat his defender with an outstanding body trick and sent the ball home 58 seconds from time. And they defended well even though Italy regained the last possession but couldn’t set up anything, much to the delight of dozens of Hungarian fans stands who loudly celebrated their team’s surprising triumph.

Montenegro had most reserves and could rest a couple of hours more than the Russians who arrived from a devastating battle against Italy. For a while, they could keep up with the Montenegrins bit the World League title-holders extended the gap step-by-step

They led 4-3 after the opening period, 6-4 at half-time and delivered the killer blow in the third while netting three unanswered goals. Russian attack went into ‘silent mood’ for 12:20 minutes while Montenegro jumped from 5-4 to a 9-4 lead. The Russians woke up a bit late though in a span of 62 seconds they could have come back to 9-7 Kholod hit the bar from a late penalty so it stood 9-6 before the last break

soon it was 10-6 which seemed to have settled the game. With nothing left at stake, a series of nice goals and a couple of penalties followed (the latter ones were called based on the new rules), the Montenegrins didn’t slow down so they added six more in the last period.

Serbian defense begins to work in the second half, enough to down Greece

It was a neck-to-neck game for two periods, defenses didn’t work that well as both sides scored 8 goals in the first half. The Serbs lacked the saves from their reserve keeper but once the experienced Branislav Mitrovic jumped in for the second half, the game took a different direction.

Spain took a dream-like start as Felipe Perrone stormed to a great counter-attacking goal, then, after a killed man-up, Alejandro Bustos pulled the ball in from close range to give Spain a 2-0 lead. The Croats needed more than four minutes to settle themselves but then their scoring machine began to work. They netted four in 2:49 seconds, three of them from the .

In the second, the hosts missed two man-ups but after long and exhausting swimming and battling competition Ante Vukicevic’s one-timer gave Croatia a two-goal lead and the Spaniards, scoreless for almost seven minutes, looked a bit hopeless in this phase. But the European silver medallist side showed why they are regarded one of the most quickly developing teams: they bounced back with two great shots from Alberto Munarriz. One came from a free-throw, the other from a man-up with 10 seconds from time to tie the score by halftime at 5-5.

After a missed man-up at both ends, the battle heated up in the third. The Croats took the lead three times but the Spaniards always had a reply. Vukicevic put away an extra, then Alberto Barroso hit for 6-6 from a free-throw. Andro Buslje converted another 6 on 5, this time Felipe Perrone had the answer with a pin-point shot for 7-7. Luka Loncar pushed the ball in after some heavy fighting around the goal-line while the Croats could get the rebound twice. Barroso sent a bouncing beauty under the bar with 49sec to go in the third, then a Croatian goal was disallowed, again after a rebound in a man-up (it was a right call) so it stood 8-8 before the last period.

Maro Jokovic just beat the buzzer for an action goal to kick off the final eight minutes but Alvaro Granados stayed cool to sent the ball home from a 6 on 4. Both goalies delivered some great saves while the tensions grew sky high during thanks to some ambiguous situations. One ended in a man-up for Croatia but Dani Lopez could deny them, though only momentarily since after the corner-throw Maro Jokovic’s left hand did the usual magic, sending an outstanding shot to the top left corner. Then came the turning point, the Spaniards hit the post from their man-up, Loren Fatovic escaped, earned a penalty and converted it, though Lopez almost caught it. So it was 9-11 instead of 10-10, with 2:12 to go – Croatia seemed to have it. And they did: Fatovic netted their next man-up with 1:19 to go which ended the contest.