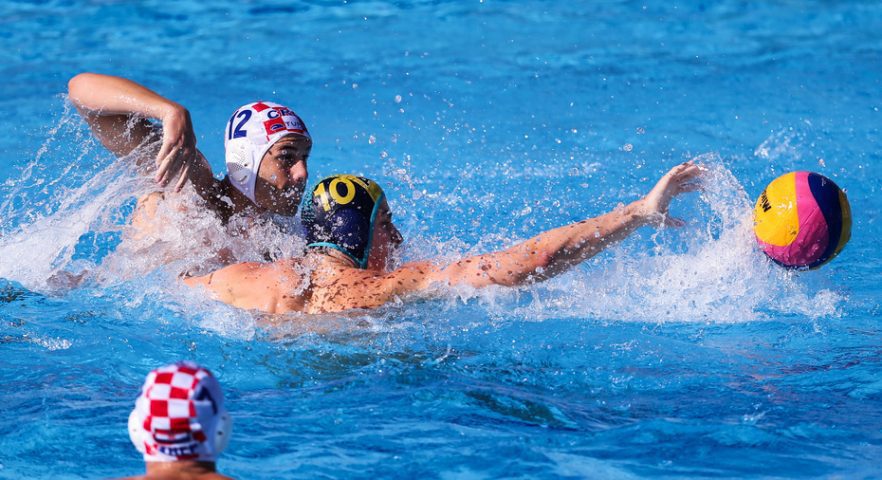 Mihaljevic (CRO) and Goldschmidt (AUS) Photo by S.Sandic/WPF of Serbia

Eight European teams will play in the quarterfinals of the FINA World Men’s Youth Championships in Belgrade.

The matches of the crossover round were on today’s competition program. All four non-European teams suffered losses and will continue the tournament in the classification matches.
Most of today’s games were one-sided contests. Only one game was pretty exciting. Spain defeated the USA by three goals (13:10).

All other European teams recorded victories with double-digit margins in the playoffs. Croatia beat Australia easily (14:3). The Netherlands ran over Kazakhstan (30:3), and Italy beat Canada 18:5.
Hungary, Greece, Serbia and Montenegro qualified for the quarterfinals as the group winners.

Quarterfinals (August 17): Hungary – Italy, Greece – Spain , Serbia – Croatia, Montenegro – Netherlands (the full schedule is at the end of the article) 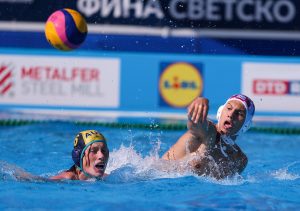 All photos by Slobodan Sandic/Water Polo Federation of Serbia

The solid defense has been Croatia’s attribute since the start of the tournament. Today, the Croats let Australia score only three goals while they netted 14.

After the first quarter, a big difference in quality and international experience between Croatia and Australia was obvious. Croatia played its best match at the tournament so far. At the beginning of the second period, the Croats made several mistakes in the attack, but Australia didn’t punish that. In the middle of the quarter, Toni Mozara scored the most beautiful goal in the game. He found the net from seven-eight meters for 6:1. McKeel replied for 2:6, but the Croats produced a 6:0 series to secure a win and spot in the quarterfinals, where they will meet with archrival Serbia.

“The quarterfinal match is one of the most important games in each tournament. Today’s game was really tough for us, but we played a really good game overall. Our next opponent is Serbia. We expect another difficult match, but we are going to do our best and hope to win”, Toni Mozara, the player of the match, said.

The U18 generation of the Dutch players proved its big potential in the group stage in Belgrade and at the 2021 European Youth Championships. Therefore, a big victory over Kazakhstan is something that was expected. The Dutch scored even 14 goals from counterattacks and they had almost a perfect percentage of extra player shots (9/11). 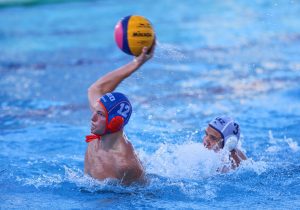 The Netherlands kept Kazakhstan goalless until the 24th minute when the Asians got on the scoreboard with a goal for 1:20.

“We are very satisfied with what we have done so far at a nice and well organized tournament in Belgrade. We are really happy to be in the quarterfinals. Now, we face Montenegro. I think Montenegro is a tough team, but I think if we give our best, we will be able to win.” 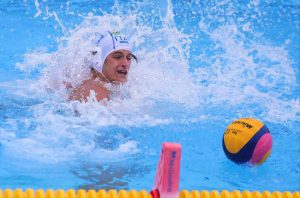 Italy didn’t leave the decision for the second half of the match. The Europeans took a flying start and earned a 6:0 lead. By the first break, they stretched the margin to seven. At halftime, it stood (11:1). Italy had a 13:1 lead in the middle of the third period. After that, the “Settebello” slowed and saved energy for a demanding task in the quarterfinals – a match against Hungary.

The last match of today’s program was the only encounter that offered excitement. 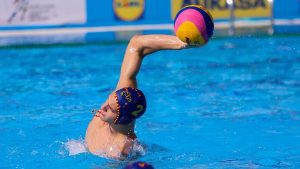 The Spaniards entered the third period with a 7:6 advantage. But, USA’s Ryder Dodd opened the second half with the fourth equalizer. He scored from a lob for 7:7. After that, the teams exchanged goals until 9:9. A minute and a half before the last break, Hugo Castro Fernandez gave Spain a 10:9 lead. Shortly after, he doubled his team’s advantage from a counter-attack. But the USA was still in the game before the final quarter since Burghardt converted a man-up in the last attack in the third period.

But, Spain’s defense, commanded by goalkeeper Xavier Teclas, was superb in the final quarter. At the other end of the pool, the Spaniards netted two goals. The scorers were Frigola from a 6 on 5 (26th minute) and Gil, who found the net from the deep left to make it 13:10 (28th minute). In the remaining time, the Spaniards kept a hard-fought advantage and advanced to the quarterfinals.

The Turks beat Uzbekistan, maybe, easier than expected. The second period was crucial. The Turks defense worked well, while they were unstoppable in the attack. They netter nine unanswered goals(most from counter-attacks) in the second quarter, and everything was decided. 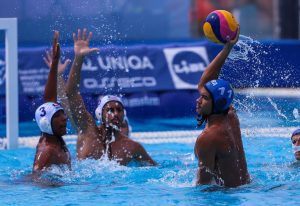 Brazil demolished Kuwait, which scored its only goal from a penalty in the 26th minute (for 1:21). All the Brazilians, except the goalkeepers, found the net.