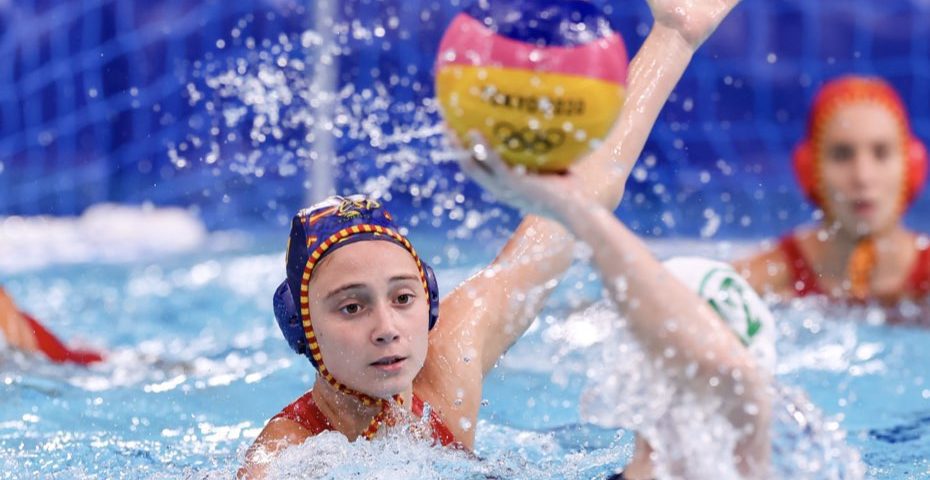 Could we be looking at a future Total Player Award winner? (Photo by Marcel ter Bals/Orange Pictures)

The Olympic games are always an eye-catching spectacle. It’s the sporting event where history is written, and legends are made. The Olympics, however, also have the potential to give birth to the sporting superstars of the future – and Elena Ruiz Barril certainly fits into that category.

The young Spaniard was absolutely sublime in her side’s historic 29-4 victory against South Africa in their opening group game. On this, her Olympic debut, she scored five goals – the most in her team, making her the joint top goal scorer of the tournament alongside Maggie Steffens and Steph Haralabidis.

That is big for any player, but for a player who is only sixteen years old, that is a major achievement. Her performance against South Africa is a breakthrough moment in her career on the international stage, and a moment she will never forget.

However, for those who know her well or have been following Spanish water polo, her elevation will come as no surprise.

Born in a small town 20km outside Barcelona called Rubi in 2004, she grew up playing for her local club, CN Rubi, where she has become a local hero as a fully integrated senior player. Other notable former players of CN Rubi include Elena’s older sister, Ariadna, who now plays for Sant Andreu, and her current Spanish teammate, Beatriz Ortiz. 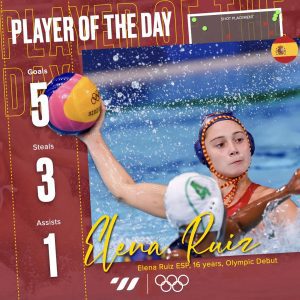 Ruiz was the Total Player of the Day

She is adored around Can Roses, home of CN Rubi, and for good reason. Ruiz was Rubi’s top goal scorer last season, and second overall in the league with 54 goals in fifteen games. She has the best goal-to-game ratio in Spain and one of the best ratios in Europe.

As a junior, Ruiz played a significant role in Spain’s U15 girl’s team winning the 2019 European Championships held in Kirishi. She scored vital goals against the Netherlands in the Semi-Final and scored the winning penalty in the final.

Officially, her senior debut was at the World League Qualifiers in Budapest earlier this year, scoring nine goals in seven games. She was later part of Miki Oca’s plans at the Super Finals in Athens last month, where she scored eight goals in five appearances.

But it’s not just the goals that Ruiz provides that has caught the attention of the many that watch her. Technically she is very mature, with an excellent range of passing, mixing flair and simplicity. Without the ball, Ruiz is an incredible clean defender, often stealing the ball with ease from attackers. She is constantly aware of the threats her opponent’s pose. When she finds herself in the pit, despite her size and age, she does not panic.

Given how young Elena Ruiz is, you’d have thought that she would be in contention of being the youngest female water polo player to appear at the Olympics, but she is not. In fact, she is not even the youngest female Spaniard to play at the Olympics. Her national teammate, Paula Leiton, holds that record having appeared at Rio 2016 aged 16 years and 3 months as opposed to Ruiz’s 16 years and 9 months.

There is no doubt, though, that if Spain is aspiring to dethrone the USA and deny them of their third straight Olympic title, they will need the talent of Elena Ruiz, and who knows, she may just become the youngest female water polo player to ever win a gold medal. In any case, she is not only one to watch for the future, but she is one to watch at these Olympics now!