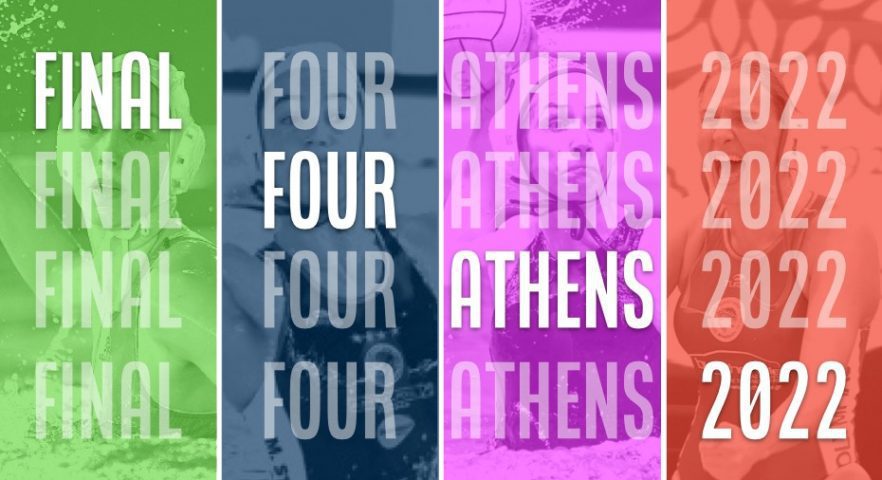 The climax of this season’s Women’s Euro League is nearly upon us as Olympiacos, Sabadell, UVSE and Plebiscito Padova will battle it out for European glory in the Greek capital, Athens.

This season’s competition has been epic; with some classic encounters and a lot of controversy. The drama will no doubt continue this weekend, in a fantastic showcase for the Women’s game.

Five-time champions, CN Sabadell, with face the Italian side Plebiscito Padova in the first Semi-Final, while current reigning champions and hosts, Olympiacos Piraeus, have UVSE for company in the second Semi-Final.

A season to remember…

This season has been one of the most competitive Euro Leagues in recent memory. Right from the qualification round, the 33rd edition of the competition has taken many twists and turns.  From Mataro’s shock early exit in the group stages, to KINEF Kirishi and Dynamo Uralochka’s dramatic expulsion from the competition, this season has not been short of action.

With the inclusion of the competition’s most successful side, Ekipe Orizzonte (8 titles), and the inclusion of 24 teams from a record 12 different countries, the women’s game is in good place – mixing the women’s game strong heritage with a progressive attitude. The professional club system in Europe continues to attract the very top players, to create the spectacular fixtures we shall see this weekend, and that we have seen throughout the season.

Olympiacos have everything going for them. They have the home advantage, they have a large number of hugely vocal fans, and they have a squeaky clean unbeaten record in the competition this season. On top of that, they also have a fantastic and expensively assembled squad.

The Greek backbone of their team; Eleftheria and Vasiliki Plevritou, Chrysoula Diamantopoulou, Nikoleta Eleftheriadou, Tina Siouti and young Maria Myriokefalitaki, all remain from the winning squad last season. Supplemented with the likes of Foteini Tricha, Brigitte Sleeking, Jordan Raney and Kyra Christmas, the Red-Whites have seriously bolstered their squad with top-quality players.

Olympiacos probably have to be the favourites at this stage, but it is true that Aleksandar Ciric’s side have an arguably tougher Semi-Final against UVSE, than the other favourites for the competition, Sabadell – who face Plebiscito Padova.  The Piraeus side have a 50% record when reaching the Euro League Final – winning twice (vs Sabadell in 2015, vs Dunaujvaros in 2021) and losing twice (vs KINEF in 2018, vs Sabadell in 2019).

Having missed last year’s Final Four competition altogether, David Palma and his Sabadell side are back, and as far as they concerned, they are hoping to write their own Greek Tragedy for Olympiacos.

Sabadell have bossed the Division de Honor this season in Spain with their ever present, star studded line-up.  With names like Ramos, Games, Van der Sloot, Steffens, Sohi, Garcia Godoy, Forca Ariza and Keuning, they are seriously stacked with some of the world’s best superstars. They are seasoned professionals with an immense amount of experience, evident from their quarter-final victory against Ethnikos. If a team can beat Olympiacos in Athens, its this Sabadell side.

However, one can’t help but notice a worrying trend for Sabadell this season whereby they have been unable to win any of the finals they have been in. In the Supercupa de Espana at the start of the season, they lost 10-8 to Mataro, and in the Copa del Reina final they lost again, 7-4, to Mataro. Incidentally, Mataro beat Sabadell in the qualification stage in the Euro League this season 10-9. One may point to this as being a very specific fixture, but it is fair to say that Sabadell have not turned up in the big games this season so far. They’ll need to address this if they hope to secure a 6th Euro League title.

Sabadell have a remarkable record in the Euro League Final Four.  When getting to this stage, they have only failed to progress to the Final once, losing 11-9 to Olympiacos in the Semi-Finals in 2016.  They have won five of the seven Euro League Finals they have participated in (2015 vs Olympiacos, 2018 vs KINEF Kirishi).  Sabadell also have a knack for winning with style – they hold the record for the biggest win in a Final when they beat Vouliagmeni 19-10 in 2014.

Hungary for the win

UVSE are back in the Final Four for a second successive season, perhaps fortunately, but they will certainly not be in Athens to make up the numbers. UVSE’s team, a hybrid of experienced players and young and exciting talents, have been going well in the Hungarian OB I, and are in the driving seat to win a 6th national championship.

Leading the line for the Lilacs is the all-round megastar, Rita Keszthelyi-Nagy. She is supported by the ever-improving keeper, Alda Magyari, as well as the proven talents of Gabi Szucs, Natasa Rybanska and Dora Abel-Antal. The UVSE recruitment policy in the past few seasons has been clear – that they have not wanted to buy stars, but create them. Their young side includes one of the youngest players in the tournament, Kata Hajdu (16 years old), and other very exciting young Hungarian players; Tekla Aubeli, Lili Forgacs, Kamilla Farago and Panna Szegedi.

For all UVSE’s domestic success, it has never translated into European silverware. Marton Benczur’s side have made this stage three times before however, reaching the Final in 2016 where they lost to Sabadell by 11 goals to 8. Tomorrow, the face Olympiacos, as they did at the same stage in the competition last year, in what will be a really difficult Semi-Final for them. There is no denying that they are underdogs, with such a young team in what will be a hostile environment for them. However, they will thrive of this experience, enjoy the challenge and who knows if they will cause an upset.

Never write off the Italians…

Plebiscito Padova are the Italian representatives in the Final Four, returning to this stage of the competition for the second time in their history (finished 4th in 2019). Stefano Posterivo’s side are a tough team to beat, and currently sit top of the Italian A1. Like UVSE, they reached this stage of the competition as a result of the expulsion of the two Russian clubs, but they are definitely a well-crafted team. Mariia Borisova is the dominant player in the pool for the Italians, with Laura Barzon often finding the back of the net more often than not. Aussie Stinger Elle Armit features often in the team, as does Elisa Queirolo and Laura Teani – who is a incredibly gifted goalkeeper.

While Plebiscito are defensively solid, a big problem for them is there is a big lack of goals in their squad. Where they can keep other Italian teams out in the A1, they do not need to score a lot. However, in the Euro League, the standard is higher and their defence will be increasingly stretched, meaning they need to score more goals. They seem to struggle with this, and that might be the factor that causes them the biggest issue this weekend.

Italian clubs are amongst the most underrated teams in European water polo, and that has been the case for perhaps the last decade. However, when you look back in history, they are statistically the most successful Euro League nation. Italian teams have won the competition on 10 occasions (8 Ekipe Orizzonte, 1 Fiorentina, 1 Pro Recco), more than any other country.