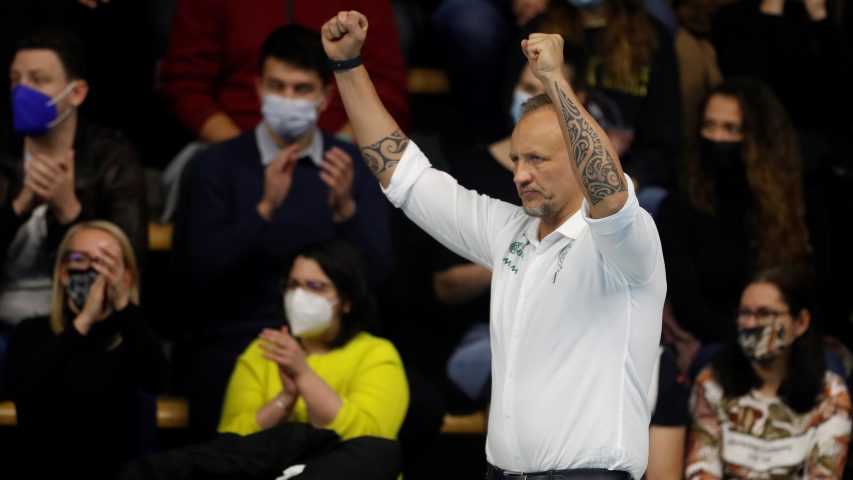 The 13th round of the Champions League answered the last questions about the composition of the Final Eight in Belgrade. We know which teams will participate in the F8.

Today’s action in the Champions League offered a lot of excitement. Only one goal separated the rivals at the ends of three of today’s five games, while two encounters ended with no winners.

The Champions League schedule for Wednesday was opened by an encounter between Olympiacos and Novi Beograd. The hosts were closer to a victory, but Novi Beograd secured a point with a literally last-second goal – 12:12. One point kept slim Olympiacos’  F8 hopes alive for a few hours – until the end of the games in Budapest and Barcelona.

Ferencvaros defeated Radnicki and secured at least 4th place. The 2019 European champion had a very challenging task. The Hungarians were two goals down but managed to turn the cards and record a 13:12 victory.

The last match of the day in Group A produced the same result as the opening game. Barceloneta and Brescia shared the points – 12:12. Barceloneta secured the draw with two goals in the last 69 seconds. One point was enough for Brescia to cement the top spot in the group and for Barceloneta to qualify for the F8 mathematically.

A three-horse race for 2nd place in Group A will be open until the end of the Preliminary Stage. Ferencvaros is in 2nd place now, but Novi Beograd and Barcelona are just a point behind the 2019 European champion.

In the last round, Ferencvaros will play a home match against Brescia. Novi Beograd will face Radnicki in the Serbian derby in Kragujevac. Barceloneta’s last challenge in Group A will be a clash with Jadran in Split.

Dinamo Tbilisi earned the first three points in the season with a 12:11 victory over Jadran Split.

Hannover defeated Spandau 10:9 in the last match of Day 13 in Group B and confirmed 4th place in the group.

Novi Beograd had only 12 players on the roster, because 2021 Total Player Dusan Mandic, Angelos Vlachopoulos, and Djordje Vucinic had to miss the match due to injuries. But, the visitors dictated the pace throughout the first half. In the 7th minute, Olympiacos led 2:1. But, in the following six minutes, Novi Beograd produced a 5:1 run. Nika Shushiashvili netted a nice action goal for 6:3 (the 13th minute).

Olympiacos, which had a miserable percentage of extra-player shots in the first half (3/11), responded immediately. Konstantinos Genidounias converted a man-up for 4:6, and the hosts started coming back into the match. Olympiacos netted three straight goals in the first two minutes of the third period and gained a 7:6 lead. But, Novi Beograd managed to recover after Olympacos’ 4:0 rush. In the middle of the quarter, Strahinja Rasovic equalized at 7:7. Before the final quarter, it stood 9:9. Novi Beograd took the lead twice in the fourth quarter (10:9 and 11:10). Olympiacos leveled on both occasions.

Just 43 seconds before the end, Genidounias made it 12:13. Novi Beograd lost the ball in its next possession, and it seemed that everything was over. But, the visitors earned the last attack after double exclusion (Filipovic from Olympiacos and Jaksic from Novi Beograd) at 0:01. One second was enough for an equalizer. Drasko Gogov passed the ball to Strahinja Rasovic, who beat the buzzer and leveled at 12:12.

Olympiacos, which was a regular participant of the F6/F8 tournaments between 2016 and 2021, and was one of the title contenders this season, will watch the Final Eight on TV. 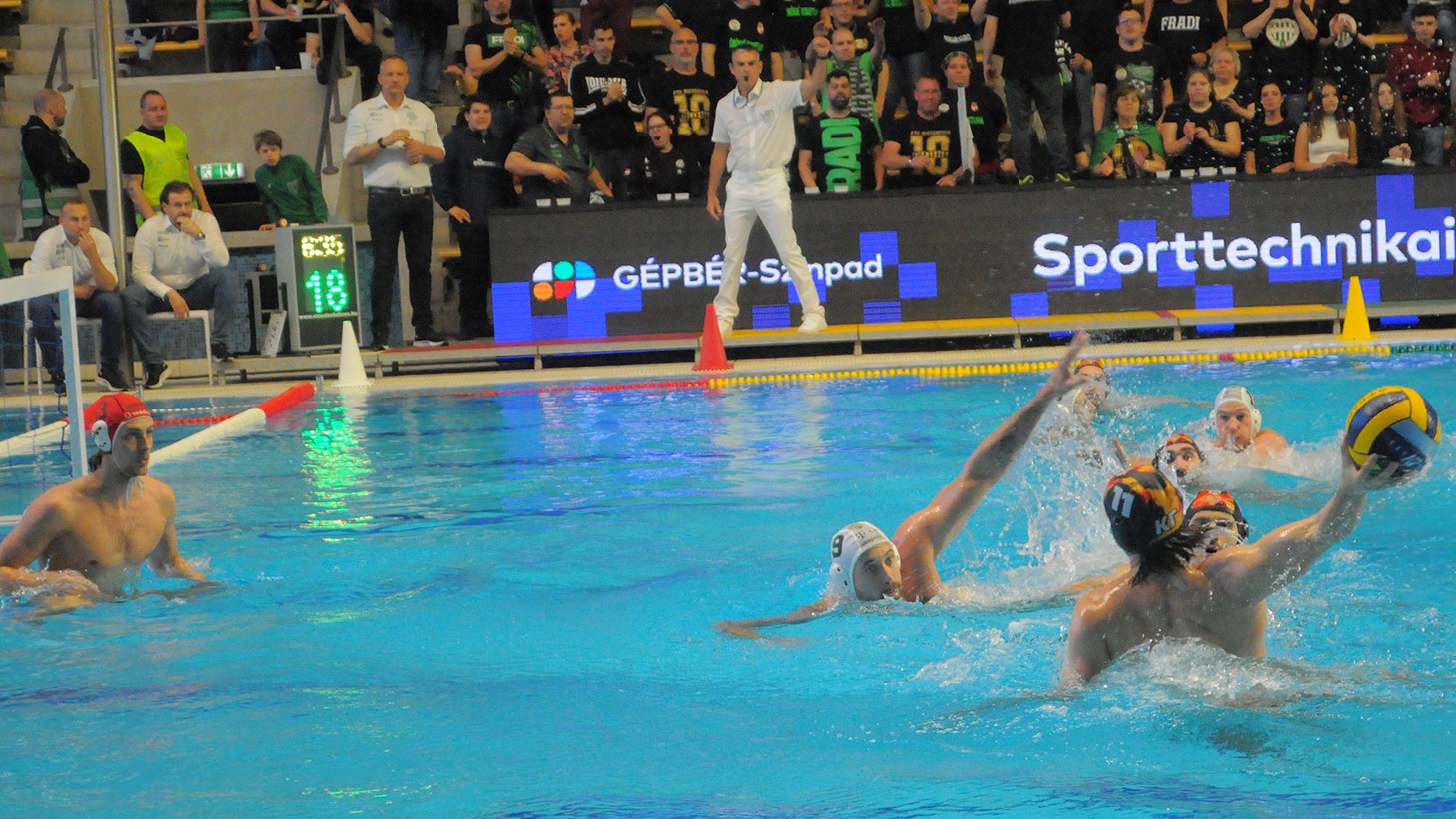 Since the first match of the day, Olympiacos-Novi Beograd, ended in a draw, Ferencvaros needed only a point in the match against Radnicki to cement 4th place. The Hungarians recorded a win, but they secured it in a thrilling finish. Radnicki, which had nothing to lose or get in this match, started very well. Ferencvaros went in front just once in the first half – 3:2.

At the first break, the sides were tied at 4:4. The visitors opened the second quarter with two straight goals and two goals separated the rivals for the first time – Radnicki had a 6:4 advantage. In the following minutes, Ferncvaros halved the deficit several times. Still, the Serbs controlled the match and didn’t let the hosts equalize. Before the final quarter, Radnicki had a minimal advantage. Marko Radulovic scored an action goal in the 26th minute and the visitors regained a 2-goal lead (11:9). But, in the middle of this quarter, Ferencvaros produced a 3:0 run in 02:06 minutes (Jansik with a man-up, Vamos and Varga action goals) for a 12:11 lead with 02:57 minutes to go. However, Radnicki didn’t surrender. The drama wasn’t over yet. Two minutes from the end, Lukic converted a man-up 12:12.

Everything was open until the dying seconds. Forty-one seconds before the end, Szilard Jansik scored his 2nd goal in the match with an extra man to set the final score – 13:12 and sealed Ferecvaros’ ticket for the Final Eight.

Barceloneta, which recorded four victories in the previous four rounds, didn’t extend its winning streak, but the Spaniards could be happy with this outcome, mainly because Brescia was the team that led most of the time and was very close to a victory. The Italians were in front from the beginning. Barceloneta equalized just once in the first half (Pavillard for 4:4 in the 9th minute). At halftime, the visitors had a 7:6 lead.

Brescia got off to a flying start in the third period. The Italian champion scored three goals in a row (Di Somma 2 and Presciutti) and jumped to 10:6 (21st minute). Barceloneta responded in the same way – with three straight goals and cut the deficit in the opening minute of the last period (Larumbe converted a penalty for 9:10). Brescia doubled its advantage twice (11:9 and 12:10).

Renzuto Iodice scored the 12th goal for Brescia, from a penalty, in the 28th minute. After that, there were no goals for a while. It seemed that Brescia would earn all three points. But, Barceloneta didn’t say its last word yet. Munarizz netted for 11:12 in the 31st minute. Lazic hit the post in Brescia’s next attack. Australian Luke Pavillard closed the match with an action goal dor 12:12 with just 17 seconds to go. Brescia had the last possession and a new chance to secure a win but failed. Anyway, neither of the teams was disappointed with the score.

The match in Tbilisi was an encounter between the teams which lost all chances to reach the F8 a long time ago. Both sides were relaxed. Jadran arrived without several key players (Dobud, Kharkov, Bukic).
The teams fought a balanced battle. Jadran got off to a better start, but Dinamo led for most of the time. The Georgians earned a 2-goal lead midway through the second quarter (4:2). Jadran replied with two goals quickly (4:4). From that point on, two goals never separated the rivals. Before the final quarter, the score was 9:9. An exchange of goals continued after the last break. Dinamo went in front three times. Jadran leveled at 10:10 and 11:11, but it had no response after Bitadze hit the back of the net for 12:11 with 44 seconds left on the clock.

Hannover completed its mission and earned the F8 berth with a victory over Spandau in the last match of the 13th round in Group B. However, Spandau didn’t gift the points to its biggest rival in the national competitions. Hannover had to work hard to record the win in the German derby.

Spandau stunned the hosts with an early 3:0 lead. Step by step, Hannover was taking control hm and broke the rival in the middle of the game – between the 14th and 19th minute. Three minutes before halftime, Spandau was still in front (6:4). In the 15th minute, the hosts finally caught up with the Berliners. Petar Muslim scored from an extra for 6:6. Muslm added one more power-play goal in the 18th minute. A minute after, Aleksandar Radovic scored from a penalty shot for 8:6. That 4:0 series proved vital for Hannover’s win. The hosts controlled the match. Spandau didn’t give in, but it didn’t equalize. Hannover entered the final minute with a 2-goal advantage (10:8). Spandau’s Strelezkij closed the match with 30 seconds to go for 9:10.