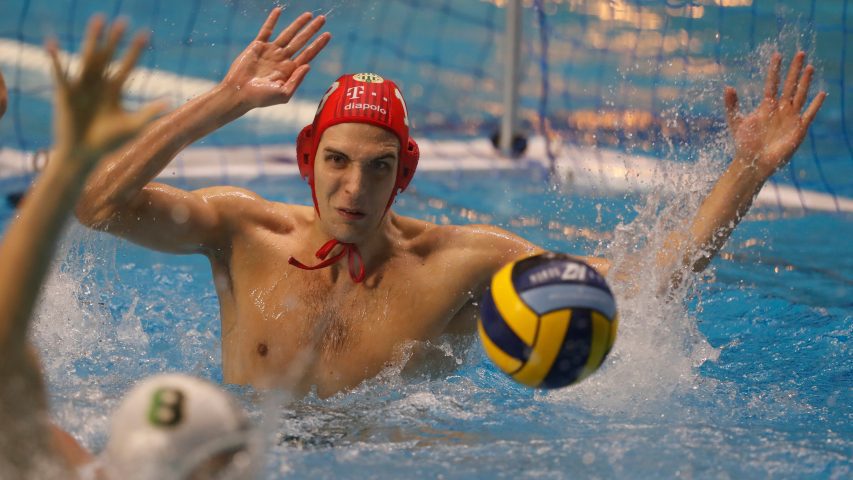 Ferencvaros recorded the first win in the 2021/22 Champions League. The 2019 European champion edged out Novi Beograd 11:10 in the big game of the fourth round of Group A.

A big derby was played in Athens, too, but that game offered less excitement. Olympiacos played excellently in defense and beat Barceloneta 8:4.

Olympiacos and Brescia share 1st and 2nd place with 10 points each. Even four teams, ranked from 3rd to 6th place, are tied. Ferencvaros, Barcelona, Novi Beograd, and Jadran have collected six points each, which promises interesting battles in the following rounds.

As expected, the great teams of Ferencvaros and Novi Beograd fought a fierce battle from the first whistle. After a balanced first quarter, Novi Beograd dictated the pace in the opening minutes of the second period. The visitors led 4:3 and 5:4. Then, Ferencvaros produced a 3:0 series and jumped to a 7:5 lead (14th minute). Still, Novi Beograd halved the deficit shortly after the hosts’ 7th goal. The Serbs had a man-up in the last possession in the first half to equalize, but Ferencvaros kept a 7:6 advantage until the middle break. 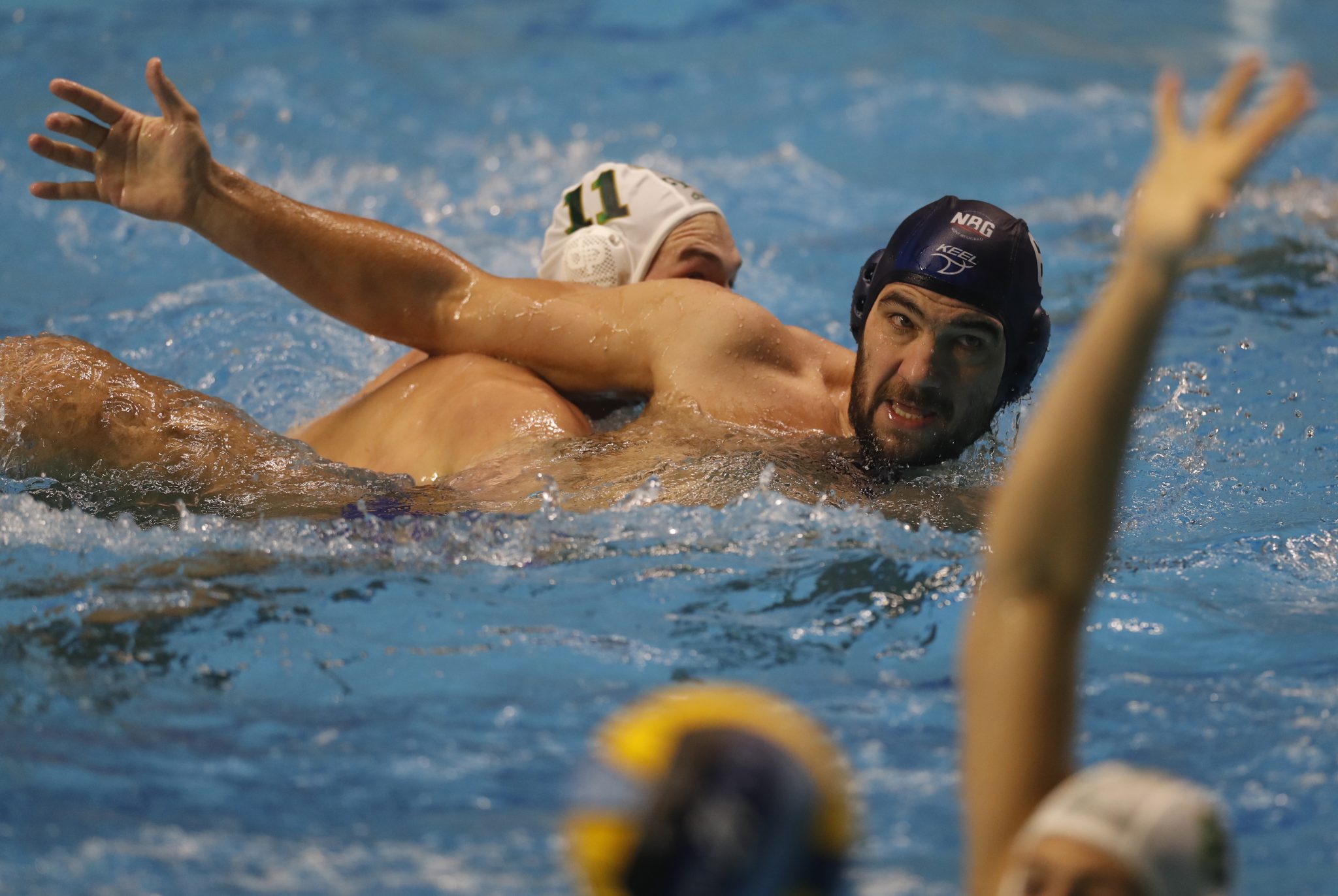 But it didn’t take a long before Novi Beograd leveled. Gogov equalized at 7:7. Two minutes before the last break, it stood 8:8, but even four goals were scored in the last 141 seconds of the third period. The series was opened by Marton Vamos who scored from a counter-attack for 9:8. Shortly after, Gergo Fekete scored a nice action goal and Ferencvaros had a 2-goal lead again (10:8). At the other end of the pool Dusko Pijetlovic responded (9:10), but Ferencvaros’ center, Serb Nemanja Ubovic closed this period, by converting a man-up for 11:9 four seconds before the buzzer. It was Ubovic’s fourth goal in the game. 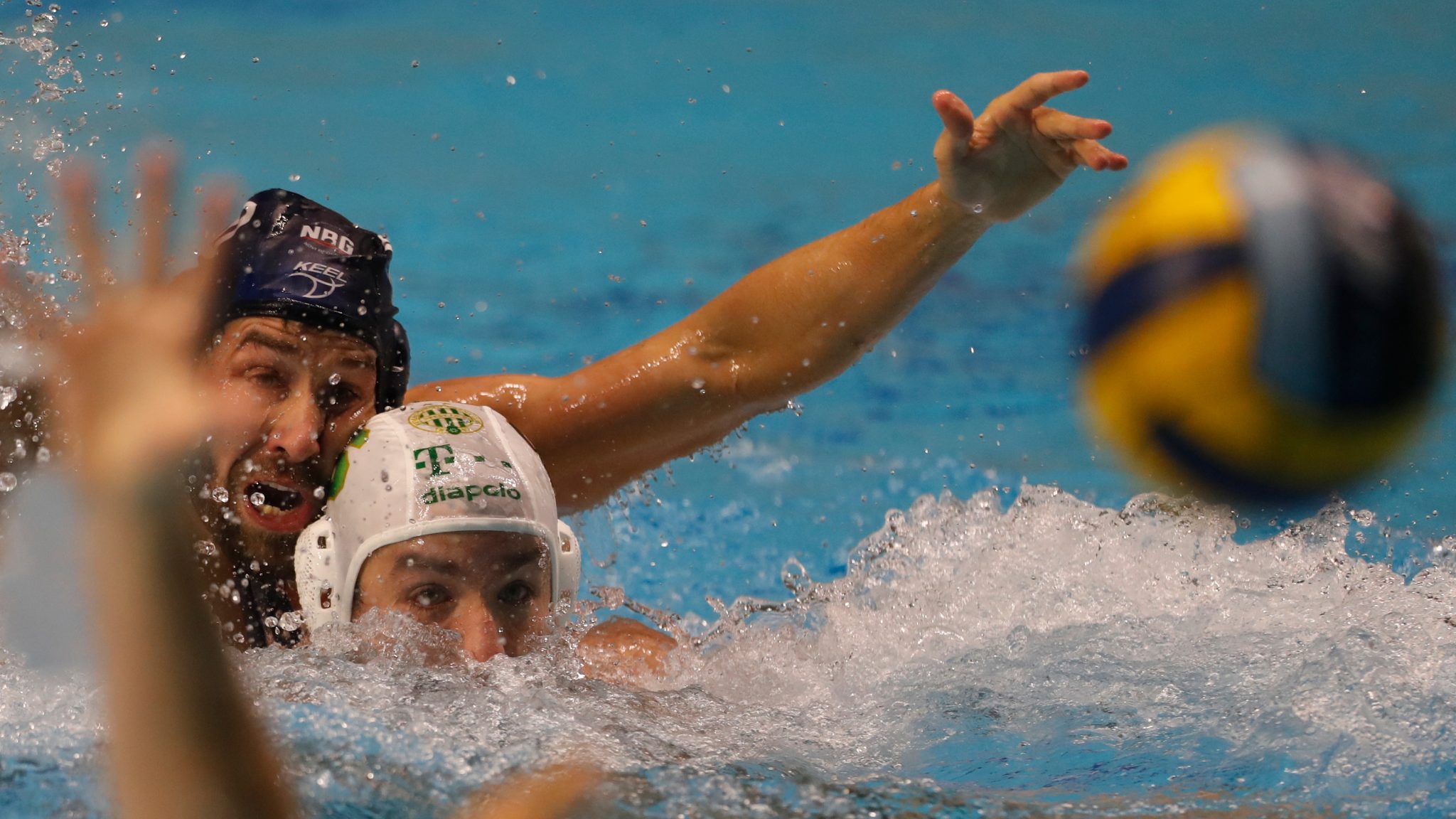 Novi Beograd put a lot of effort to equalize. The visitors played very aggressively in the fourth quarter. Still, the Serbs wasted four man-ups in the final eight minutes. Ferencvaros’ goalkeeper Soma Vogel posted some excellent saves. He collected a total of 17 saves tonight (including one in the fourth quarter that VAR would analyze if this system existed in club competitions). The only goal in the fourth period was scored 28 seconds before the buzzer. Strahinja Rasovic put away a 6 on 5, but Ferencvaros kept the ball and the win in the remaining time.

After three draws in the first three rounds, the Hungarians earned valuable points to remain in the race for the F8. 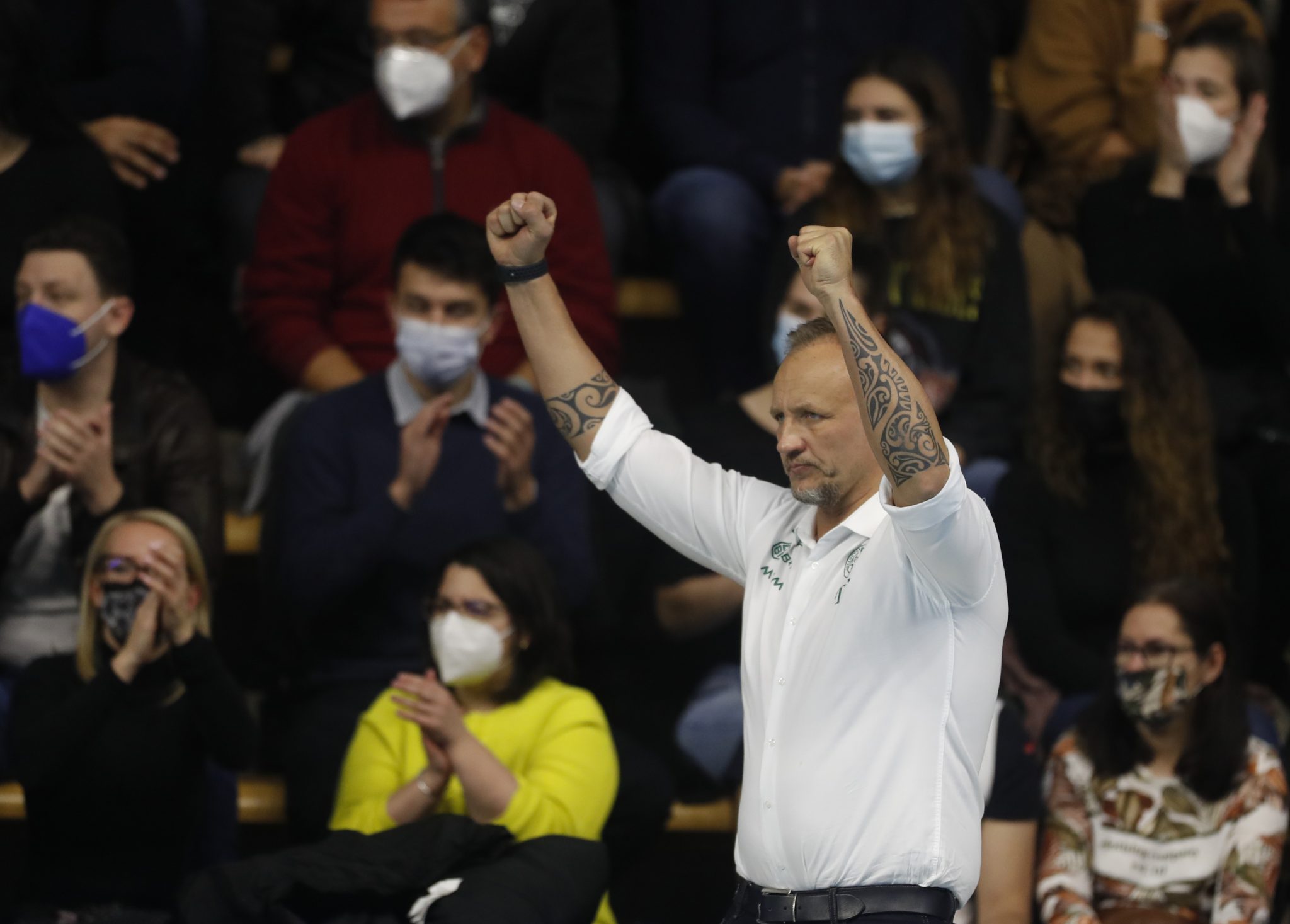 This evening, Novi Beograd finished the series of eight games in eleven days. Between November 19 and 30, Novi Beograd played six games in the Regional League and two in the Champions League. After seven victories, the Serbs’ winning streak was ended in Budapest.

Barceloneta played well in defense. It conceded eight goals in the game against one of the biggest favorites. But, Olympiacos’defense, commanded by Marko Bijac (15 saves), was superb. Barceloneta didn’t score a single action goal (three were with an extra player and one from a penalty). As for Olympiacos, the Greeks netted four action goals, three with a power-play advantage and one from a penalty. Barceloneta had a poor shot efficiency – 14,3% (4/28). Olympiacos had 40% (8/20).

The first goal was scored only a minute and a half before the end of the first period. Gouvis broke the deadlock for 1:0. Captain Mourikis doubled the Greeks’ advantage in the 9th minute. Shortly after, Barceloneta got on the scoreboard –Australian Luke Pavillard converted a man-up. In the following minutes, the defenses dominated. The next goal came in the 16th minute when Fountoulis scored from a penalty.

Early in the third quarter, Filip Filipovic scored from an extra for 4:1. Olympiacos maintained a three-goal difference until the last break (6:3). Chrysospathis made it 7:3 in the 26th minute. Alvaro Granados’ goal from a penalty with 02:49 to go boosted the Spaniards’ slim hopes. But, they couldn’t go further. Filip Filipovic set the final score from the center-forward position after a nice pass from Genidounias.

Olympiacos took revenge for a devastating 9:22 loss to Barceloneta in the quarterfinals of the 2021 Champions League.

The lead was constantly changing the side in the first half. Radnički had a 1:0 and 3:2 advantage, but Jadran entered the second half with a 4:3 lead. Radnicki’s Stefan Brankovic opened the third period with an action goal. It turned out that it was the only goal in this quarter, so the teams were tied at 4:4 before the final eight minutes.

The fourth quarter saw nine goals, one more than the first three periods. Jadran had a slim 5:4 and 6:5 advantage in the early stage of the fourth. After Jadran’s sixth goal, Radnicki had a man-up to equalize but failed to score. Immediately after, Butic converted a man-up and Jadran gained a 7:5 advantage. For the first time, two goals separated the teams. Radnicki’s center-forward halved the deficit 30 seconds after (6:7). But, Jadran replied with two action goals within 40 seconds. Jerko Marinic Kragic, the man of the match, scored his 5th goal for 8:6. Niksa Dobud found the net to finish Jadran’s excellent attack and give his team a 9:6 lead. That was the end of the contest. Radnicki narrowed the gap (8:9) at 00:28 when it was too late. 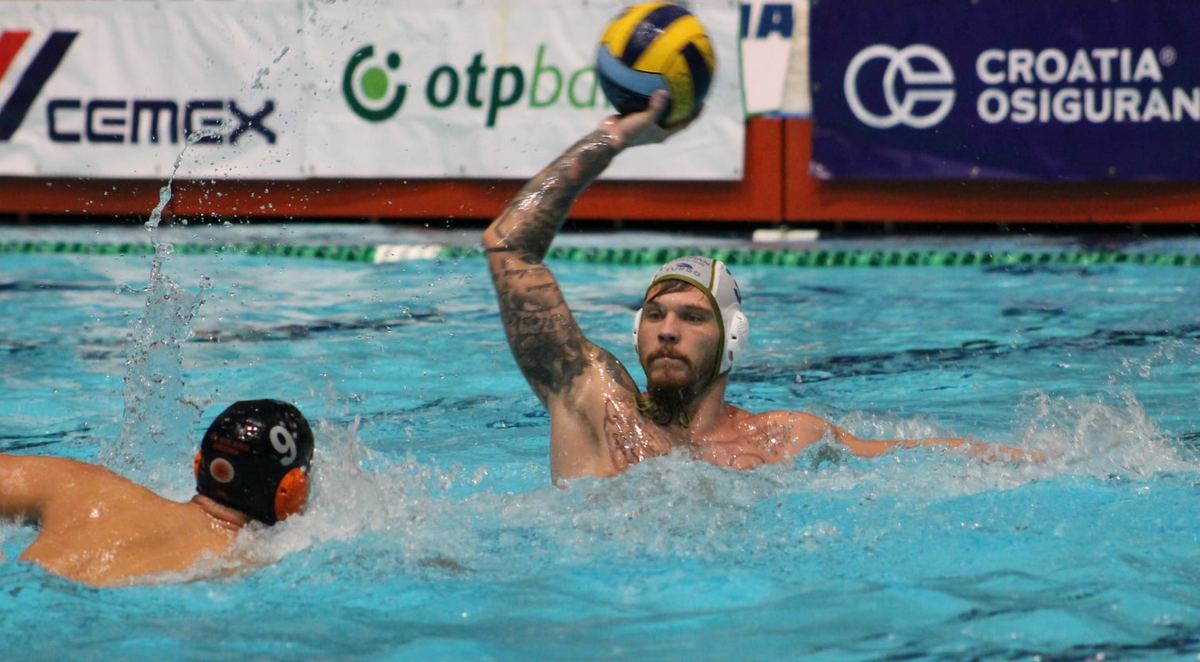 Brescia’s defense was far from its best in Tbilisi, but the Italian champion recorded a convincing victory. Brescia punished Dinamo’s mistakes and earned an early 2:0 lead with two goals from counterattacks. Late into the first quarter, they went to 5:1. By the middle of the second period, the Italians built an 8:2 lead. From that point on, the difference was never smaller than five goals. Djordje Lazic, Stefano Luongo and Edoardo Di Somma scored more goals than Dinamo – each of the three found the net three times.