Ferencvaros keeps 2nd place in Group A after thriller in Budapest; Barceloneta to face Recco 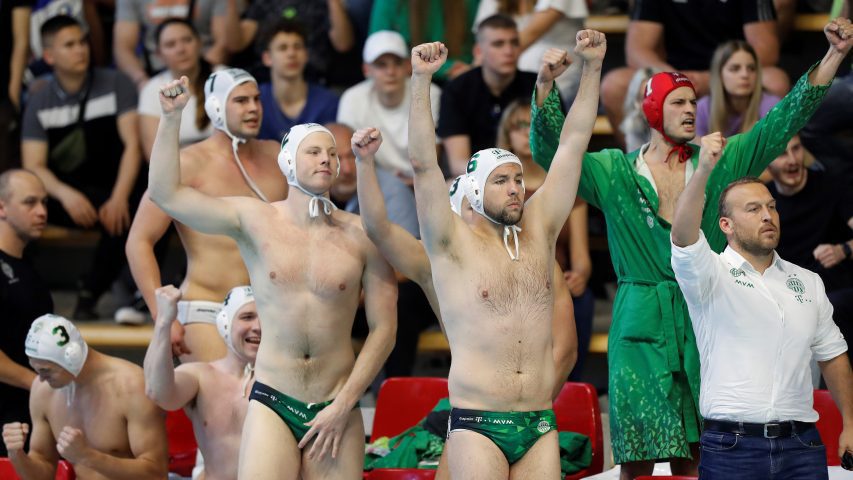 The teams that needed points in the 14th round of the Champions League Group A beat their respective rivals. Accordingly, there were no new ups and downs in the standings.

Ferencvaros beat Brescia 8:6 in an even contest in Budapest. The Hungarians were chasing the rival throughout the match. Only 13 seconds before the end, Ferencvaros went ahead for the first time. In the last second of the game, the hosts added another goal to confirm the win and 2nd place.

A half-hour after the game in Budapest, Barceloneta beat Jadran in Split (15:13) and climbed to 3rd place, but not for long.

Novi Beograd defeated Radnicki (13:11) in the last match of the group stage and cemented 3rd place. That means that Barceloneta will have the most demanding task in the quarterfinals as it will face Pro Recco. Novi Beograd will play against Marseille, while Jug will be Ferencvaros’ opponent.

This evening, Ferencvaros was without head coach Zsolt Varga, just like a few days ago in the match against OSC in the Hungarian League final. A long time ago, Varga was diagnosed with extrasystole (heart rhythm disorder), which was controlled by medications. Last few weeks, he felt symptoms again. As Varga said for Ferencvaros’ website yesterday, a doctor’s suggestion was that surgery had to be done as soon as possible. It is a routine procedure, Varga explained and added that rehabilitation would last for a week. He underwent surgery this morning. Assistant coach Nyiri replaced Varga this evening.

Brescia had no pressure in this match because it secured 1st place after the 13th round. The Italians played for pride, while Ferencvaros needed three points to keep 2nd place. Brescia was closer to a victory, but Ferencvaros scored three unanswered goals in the last 73 seconds.

Brescia led for almost all time of the encounter. Early in the second period, Brescia built a 2-goal lead for the first time (3:1). Still, the Italians couldn’t find the net for 10 minutes after that, while Ferencvaros leveled at 3:3 (17th minute). Nicolas Constantin Bicari put Brescia in front by converting a man-up in the 19th minute (4:3). In the following minutes, both teams missed a lot of chances, and the defenses did their jobs well (Brescia’s goalkeeper Tesanovic finished the match with 10, and Ferencvaros’ Vogel with 12 saves).

Stefano Luongo opened the fourth quarter with an action goal for 5:3. Still, Ferencvaros responded with two goals quickly (Varga and Molnar) and caught up with the rival once more -5:5.

Constantin Bicari (who moved from Ferencvaros to Brescia last summer) made it 5:6 in the 30th minute. Ferencvaros continued its chase. A minute and 13 seconds before the final buzzer, the hosts earned a penalty shot. Marton Vamos made no mistake from the 5m line and leveled at 6:6. Brescia lost the ball in its next attack. Shortly after, Ferencvaros forced a man-up. Danil Merkulov found the net from a 6 on 5. The hosts took the lead for the first time (7:6) with 13 seconds left on the clock. After that, Brescia set up a 7 on 6 (goalkeeper Tesanovic joined the attack). The Italians missed their last chance. In the last second, Denes Varga sent the ball from the middle of the field into the unguarded net and closed this thrilling game.

As expected, the big rivals fought a hard battle in the Serbian derby, although Radnicki was locked up for 6th place and the duel was a must-win match for Novi Beograd.

Radnicki was a slightly better rival in the first quarter (4:3). Luka Pljevancic opened the 2nd period with a tricky shot to double the hosts’ advantage. But, Novi Beograd replied with three goals in three minutes and went in front (6:5). At halftime, the score was 6:6. 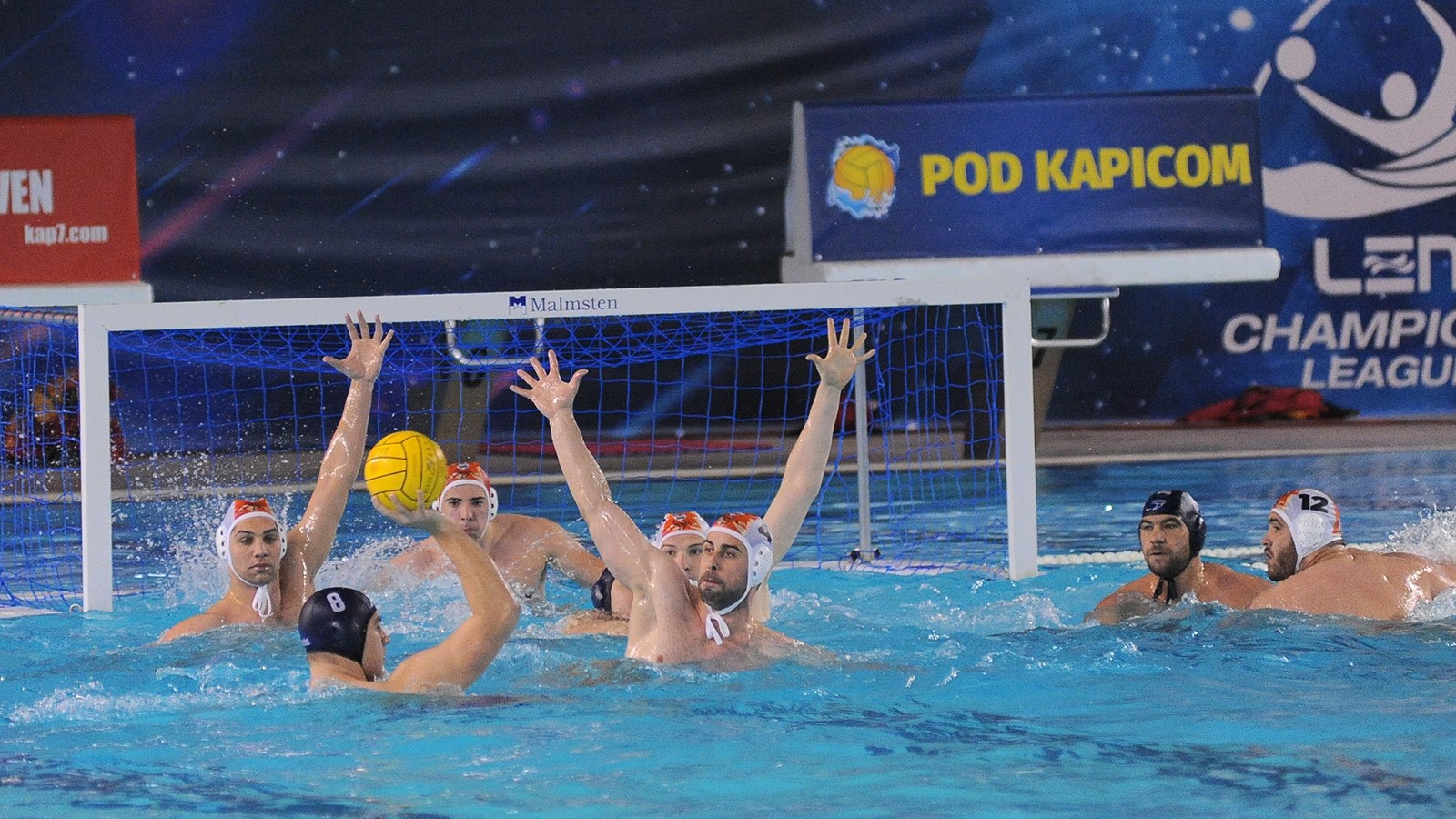 Dusan Mandic and Angelos Vlachopoulos gave Novi Beograd an 8:6 lead at the beginning of the third quarter. The Regional League winners missed a few chances to stretch the margin to three, and they paid for it. Aleksa Ukropina scored two power-play goals to level at 8:8. Still, Novi Beograd entered the final period with a slim advantage (10:9).

Djordje Vucinic scored for 11:9, but Brankovic responded quickly for 10:11. In the middle of the fourth quarter, Radnicki’s Marko Radulovic missed a penalty. That was a turning point, after which Novi Beograd broke the rival’s resistance. Shortly after, Nikola Jaksic found the net from close range after Dusko Pijetlovic’s excellent assist. Viktor Rasovic hit the back of the net with 01:28 minutes to go. The visitors gained a 3-goal lead for the first time (13:10). The best scorer of the match Aleksa Ukropina added the 5th goal to his tally and set the final score.

Jadran opened the match very well. The hosts grabbed an early 2:0 and 3:1 lead. But, after 1:3, Barceloneta found its rhythm. The visitors scored six straight goals in 6:29 minutes and jumped to 7:3 (13th minute). That 7:0 rush was crucial, but Jadran didn’t surrender and fought hard until the end. Barceloneta controlled the match in the second and the third period. The visitors even had a 5-goal lead (10:5), but Jadran reduced the gap before the final break (9:12).

Barceloneta had a 13:9 and 14:10 advantage in the opening minutes of the fourth quarter. However, Jadran was able to cut the deficit. In the 29th minute, Marino Cagalj made it 13:14. Still, Alejandro Bustos put an end to the contest with an action goal, scored two minutes before the end. Barceloneta went to 15:13 and killed Jadran’s last hope.

Last summer Olympiacos composed a team that was supposed to battle for the European title. However, the Piraeus-based team lost all chances to reach the F8 after the 13th round. Obviously, it was very hard for the Greeks to play the game in Tbilisi, which decided nothing. At the same time, Dinamo was very motivated to beat the big favorite. And the Georgians accomplished their mission.

Dinamo dictated the pace from the beginning. The hosts had an early 3:0 lead. Olympiacos leveled at 4:4 and 5:5, but the Georgians rebuilt a 3-goal lead before the middle break (9:6). The visitors needed less than three minutes in the third period to level at 9:9. However, Dinamo kept Olympiacos goalless in the next eight minutes, while it netted three goals and went to 12:9. Olympiacos tried to come back and equalized (13:13) in the 30th minute. However,

Dinamo’s Sandro Adeishvili made it 14:13 with 95 seconds to go. It turned out that it was the final score.

The man who made a difference in this match was Dinamo’s goalkeeper Nikoloz Shubladze, who posted 16 saves.