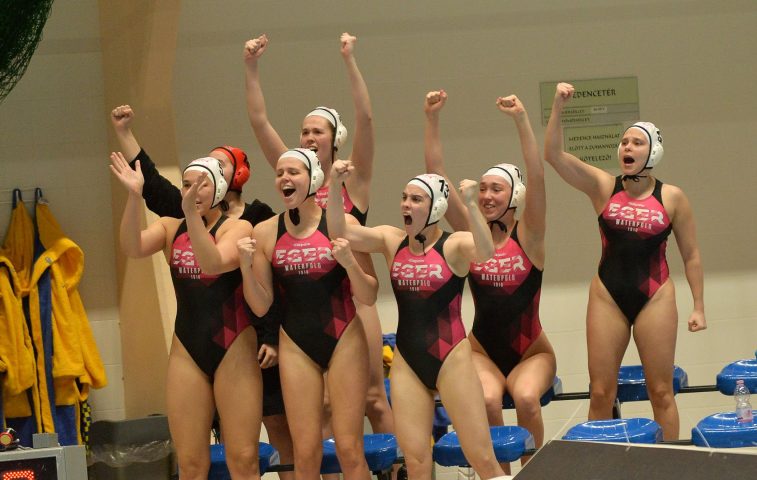 As if game week 17 of the Women’s OB I needed topping in terms of excitement, game week 18 may just have topped it. While there were no surprises for the top three (FTC, UVSE and Dunaujvaros), there was a hugely exciting game between 4th and 5th – which ended with fifth place Eger beating BVSC and narrowing the gap between them to just a single point. Additionally, Szentes had to come from behind to scrape a victory against Keruleti, which still keeps them in the mix, albeit with an outside chance, of securing a top four finish!

Eger produced a massive performance at the Bitskey Aladar pool to beat BVSC 7-6 and reduce their gap to the Yellow and Blue side from Budapest. The game was always going to produce a fantastic spectacle, in the reverse fixture back in October, the home side just about won by a single goal, and the same thing transpired here. The game looked like it may get away from Eger after BVSC rushed to a 3-0 lead in the first quarter, but thanks to outstanding contributions from Ilona Borsi, Kata Menczinger, Zsofi Katona and three huge goals from Dora Czigany, Eger managed to turn the game on its head and give themselves a real chance of a top 4 finish. The work doesn’t stop here for Eger, as they have a huge clash with top of the league Ferencvaros up next, while BVSC will host Keruleti.

League leaders Ferencvaros started the weekend with a simple assignment away to Szeged. The Green and Whites of Budapest were ruthless in dispatching the home side by 22 goals to 4 at the Tiszavirag pool in Szeged. The goals were fairly spread across most of Gyorgy Gerendas’s side, with Dora Toth grabbing four goals, and four players (Pocze, Kovesdi, Kuna and Domsodi) securing hat-tricks. Fradi are still the only side in the league to remain undefeated, while Szeged are now without a win in league games dating back to early November.

A big third quarter from Mark Matajsz’s Szentes ensures they claimed all three points on the road at Keruleti, after finding themselves 6-4 down nearing the end of the 2nd. In a strong team effort, the side from the South made sure that Eger would not pull away from them, despite their win against BVSC. Eight outfield players were on the scoresheet for Szentes, with the two foreign players, Noa de Vries and Viktoriia Dankina, netting Braces. Strong individual performances for Kincso Kenez (4) and Henri Illes (3) were in vain for their side, who stay in 7th, eight points behind today’s opponents.

After a hugely significant victory for UVSE in the midweek, they were probably feeling quite relaxed at the thought of travelling to Gyor, and they got the job done in a professional manner, beating Zsolt Vogel’s side by 14 goals to three. The leading scorer was Dora Abel-Antal,  who with 34 goals, is the third highest goal scorer this season. Tekla Aubeli and Panni Szegedi both converted a brace, while Szucs, Keszthelyi-Nagy, Farrago, Toth and Peresztegi Nagy all feature on the the scoresheet.

Dunaujvaros were back to winning ways after their defeat on Wednesday to UVSE, thanks to a comfortable trip to Tatabanya. Attila Mihok was back to see Dorottya Szilagyi bag a quad of goals. One of the leagues best scorers, Greta Gurisatti, was unavailable for selection. Tatabanya are amongst a tough run of fixtures – they face UVSE next but face Gyor the week after in what is a huge clash at the bottom of the table.