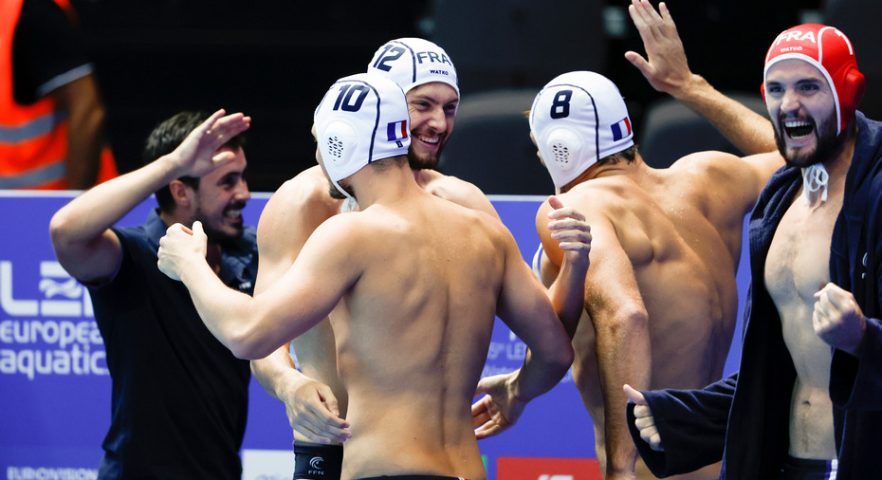 Montenegro, Georgia, Greece, and France completed the list of the quarterfinalists of the 35th European Championships for men.

These four teams beat their respective rivals in the crossover round and secured the tickets among the Top 8.

Georgia defeated the Netherlands, which can be considered a surprise. The Dutch, who played well in the group stage, dictated the pace at the beginning of the match, but the Georgians produced a 5:0 run in the middle of the game, and that proved vital for their 12:8 victory.

Greece booked a ticket for the quarterfinals with an easy victory over Israel 22:9.

The last match of the day was, without any doubt, the derby of today’s program. France and Serbia faced off. The French led for most of the time, Serbia caught up with them at the finish. Still, France had the last laugh and recorded a 10:9 victory and for the first time after 1958, reached the top 8 at the European Championships.

Serbia will play against the Netherlands, and Israel and Romania will face off in the semifinals for the 9th-12th place classification.

Montenegro struggled in the first half, but it managed to record a pretty convincing victory over the Romanians, who led 3:2 after the first quarter. The Montenegrins opened the second period with three quick goals (Spaic, Averka,Petkovic) and built a 5:3 lead. However, the Romanians didn’t surrender yet. They cut the deficit before the middle break, and they leveled at 6:6 early in the third.

But, after the Romanians’ sixth goal, Montenegro responded with three and jumped to 9:6, and finally broke the Romanians in the last quarter. 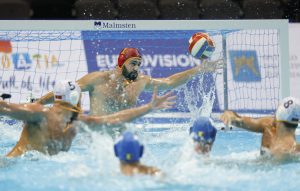 Montenegro’s goalie Dejan Lazovic did a great job with 13 saves.

After the game, Vladimir Gojkovic, Montenegro’s coach, told Total Waterpolo:
“We made some mistakes in the first two quarters and missed several nice chances, but we found our rhythm after the middle break. I think that our defenders made the difference in this match. They played disciplined and didn’t commit too many personal fouls (the Montenegrins were excluded just 6 times – Ed). Overall, I think we play better and better from game to game. In the quarterfinals against Hungary we have to display performance on a very, very high level.

The Netherlands was a better team for almost a quarter and a half. The Dutch dictated the pace, but they couldn’t make a big difference. In the 11th minute, Koopman gave the Dutch a 4:3 lead. A bug turn followed that. Left-handed players were instrumental in Georgia’s comeback. A Serb with Georgian citizenship Boris Vapenski leveled at 4:4 in the 12th minute, Shortly after, Brescia’s attacker added one more goal and the Georgians went in front for the first time in the match – 5:4. However, that wasn’t the end. Georgia’s young leftie Nika Shushiashvili made it 6:4, while Jakhaia closed the first half with an action goal for 7:4. 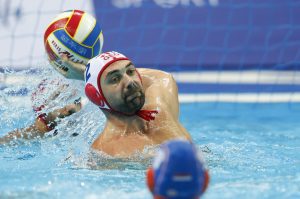 Georgia kept the momentum gained in the first half. Marko Jelaca stretched the margin to four with an action goal (8:4). It turned out that it was a crucial moment. After a 0:5 series, the Netherlands couldn’t come back. The Dutch cut the deficit to three before the final quarter. They came even closer early in the fourth, when Janssen found the net for 7:9. However, the Georgians responded strongly, with a new 3:0 series (Bitadze two goals and Jelaca). Midway through the final period, they went to 12:7 and secured a quiet game ending.

But, after the end, the Georgians were calm. They were extremely happy because of their historical success. Even the president of the National Swimming Federation jumped into the water to celebrate, 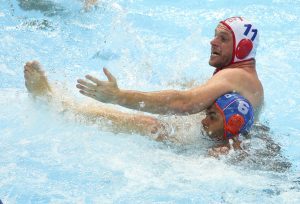 “We played great defense, especially in the second half. Our goalkeeper was on a high level. As for the crucial moments in the second quarter, I could say that we scored some goals from impossible positions, and the goals like these usually broke the other team. That happened today. The good finish of the first half was decisive. After that series of goals, we started playing better in defense and had more energy. Our next goal is to do the best we can against the host and one of the favorites Croatia.

Harry van der Mer, the head coach of the Netherlands:

Both teams are on a equal level, so I don’t think that we were the favorites today. We played for most of the first hafl. But, after that, we were passive in defense and gave them some opportunities to score easy goals. Our man-up conversion was also too bad. We had ten man-ups and scored only two goals. Comapred to our previous games, we were too slow in the attack, and it was easy for them to defend their goal. We didn’t use the opportunities we had, and the Georgians made most of its opportunities.

Greece, playing without Angelos Vlacopoulos, enjoyed an easy cruise in the match against Israel. From the beginning, it was clear that the two teams weren’t in the same weight category. The Greeks ran over the team of Israel in the first quarter. The first eight minutes set the tone of the match.

Israel finally found the way to send the ball behind Tzortzatos’ back. The Israels played better and better as the game was approaching an end. However, Greece didn’t slow, and today’s very good performance was a good rehearsal before the quarterfinals against Spain. 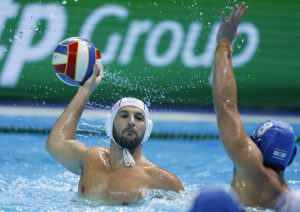 All field players of Greece got on the scoresheet. Konstantinos Gendiounias, who scored three goals, said:

We knew we would win the game today, so this duel was a good practice before the quarterfinals. We wanted to focus on extra man attacks, which were pretty successful today. We could be satisfied with the defense, too. Now, we face Spain, the world champion. It is an excellent team that plays together for three or four years. It plays fast water polo. There is no doubt that we must give 100 percent of our capabilities to reach the semifinals.

The day’s highlight was the encounter between the teams, which had ups and downs in the group stage and didn’t show performances the fans expected of them.

France started excellently and earned a point against Greece. Then it played well in the first half, but lost to Croatia. In the last round, the French were far from their best in beating underdog Malta.
On the other side, a young team of Serbia suffered a 9-goal loss to Hungary.

In the opening minutes, it seemed that the French had overcome their troubles and had gotten back on the right track. They needed less than three minutes to build a 3:0 lead. Serbia, which missed five man-ups in the first period, got on the scoreboard in the 6th minute (Drasovic).

Serbia played slightly better than France in the second quarter. Radulovic cut the deficit to one (3:4). In the following minutes, the Serbs made more nice opportunities to score, but they missed a ot, while France’s goalkeeper Hugo Fontani posted a couple of nice saves. And the Serbs paid for their misses and mistakes. In the dying seconds of the first half, Bjorch converted a man-up, and France regained a 2-goal lead (4:2).
The Serbs’ percentage of shots in the first half was just 10% (2/20). France scored four goals from nine attempts.
STrahinja Rasovic opened the third period with a goal from a penalty shot to reduce the gap to one (3:4). But, it didn’t last for long before the French stretched the margin to three. Ugo Crousillat, the played who committed the penalty foul, netted two goals in 41 seconds, and France went to 6:3. The teams exchanged goals in the next several minutes, Serbia trailed by two goals at 4:6, 5:7, 6:8. Still, the ending of this quarter belonged to the French, just as the finish of the previous period. Thomas Vernoux scored from a nice backhander (23rd minute). 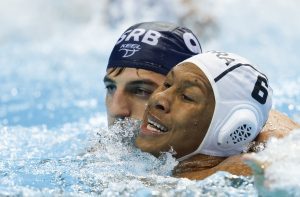 Dusan Mandic opened the fourth period with his first action goal in the match (7:9). The Serbs took control, they tightened defense and dictated the pace, but they were still making mistakes in the attack. However, it should be mentioned that France’s goalkeeper Hugo Fontani had an excellent evening. 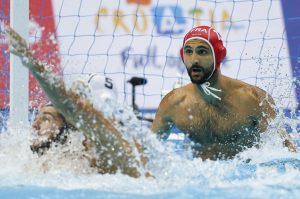 But, the Olympic champions managed to catch up with the rival at the finish of the game. Strahinja Rasovic blasted the ball from the left for 8:9 ( 30th minute). Then, France failed to convert a man-up and Serbia had a chance to level. This time, Mandic took responsibility and fired the ball from the right to level at 9:9.

However, the drama wasn’t over yet. France earned a man-up in its last possession. The most experienced player, Mehdi Marzouki made it 10:9. The series of man-up attacks continued in Serbia’s last possession. But, there was no goal this time. Fontani saved a shot from Mandic with 6 seconds to go. The French kept the ball and earned a huge win over the Olympic champion. 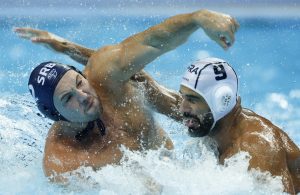 Mandic and Marzouki scored the last two goals in the match

“ I am satisfied with our team’s performance, especially with defense, which was crucial for our win. We played well with a man-down, our goalkeeper Fontani played excellently. We couldn’t beat Serbia without great defense. I am proud of this result. Italy expects us in the quarterfinal. We will try to change the mentality of this team and go into each game with a wish to win.

France deserved the win. They controlled the match and the result for more than three quarters. They exhausted us in the first three periods. Serbia played in the way as always should play only in the last four minutes. Still, a game cannot be packed into four minutes. Congratulations to France and especially to coach Vjekoslav Kobescak.

There was not much excitement in the classification matches today. Germany, the biggest disappointment of the Championships, had no big problems in beating Slovakia. Almost all field players of Germany got on the scoreboard.

Malta and Slovenia were in a neck-and-neck race for a while. However, the Slovenians never went in front. They leveled several times (3:3, 4:4, 5:5, 7:7, 8:8). Still, they ran out of gas for the final period. The Maltese dominated the final eight minutes and achieved the biggest-ever sucess in their water polo history. Malta’s best result at the Europeans so far was 15th place in Belgrade six years ago. In two days, they will battle with Germany for 13th place.

The match Germany – Malta will be played on September 6 at 10:30. The 15th-place game Slovenia – Slovakia will begin a hour and a half earlier.