France qualifies for World Championships; plays with Greece for 5th place in Split 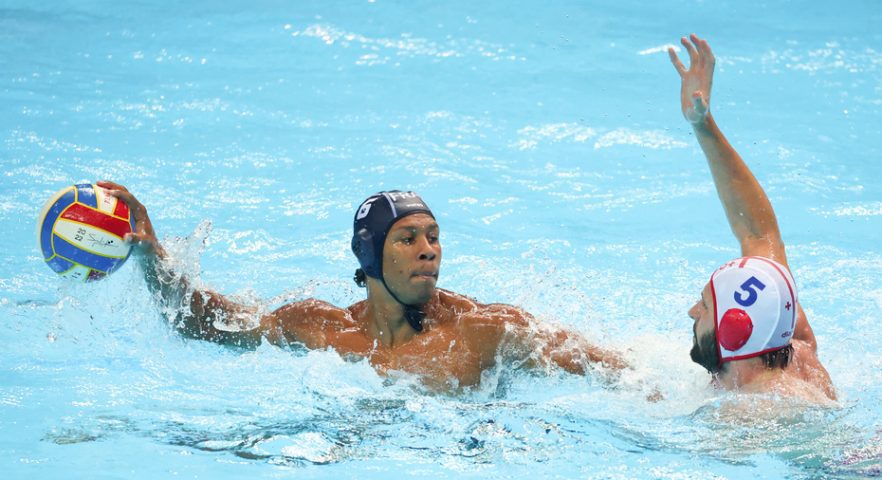 France and Greece will play in the 5th-place at the European Championships in Split on Saturday.
France beat Georgia 7:5 in the semifinals of the 5th-8th place classification. Greece defeated Montenegro (14:12)

The games for 5th-8th place classification aren’t irrelevant this time, they had some importance because three teams are hunting for two tickets for the 2023 World Championships in Fukuoka.

By advancing to the 5th-place match, France qualified for the next Worlds and joined Spain, Italy, Greece, Croatia, Serbia and Hungary, which qualified earlier.

Montenegro and Georgia will battle for the last ticket available for the European teams in the 7th-place match on Saturday.

Montenegro and Greece played the game with two completely different halves. There were only eight goals in the first two periods, and Montenegro led 5:3 at halftime. After the middle break, the course of the game changed, and the defenses weakened.

The teams traded goals in the first quarter and a half. Montenegro took a one-goal lead three times, Greece leveled three times until 3:3. Midway through the second quarter, the Montenegrins netted two goals within 48 seconds for a 5:3 lead. Goalkeeper Petar Tesanovic was undoubtedly the best player in his half. The Montenegrins entered the second half with a 2-goal lead mostly because of Tesanovic’s performance. Greece’s attacks weren’t harmless. But, Tesanovic posted 11 saves in the first 16 minutes, including a penalty shortly before the end of the half. 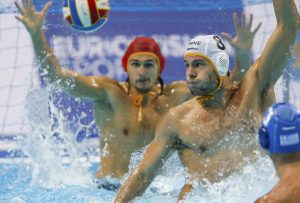 Montenegro’s defense worked well in the first half: Petar Tesanovic and Bogdan Djurdjic All photos by Total Waterpolo

But, Greece took to a flying start into the second half of the match. The Olympic silver medalists produced a 4:0 series in 3:10 minutes, went to 7:5 and Montenegro became the team that had to chase the rival. The Montenegrins came close twice during the third quarter (6:7, 7:8). Still, immediately after each of these goals, Greece responded and entered the final period leading 9:7.

Montenegro’s captain Marko Petkovic opened the fourth period scoring for 8:9 and kept his team’s hopes alive. But then came a new 3:0 series by the Greeks. Genidounias found the net from the right to make it 12:8 (29th minute). However, Montenegro didn’t give in. They cut the deficit to one in the last minute. Petkovic netted for 12:13 with 21 seconds left on the clock. The Greeks called a time out. After a pause, Montenegro’s goalkeeper Petar Tesanovic joined his teammates in Greece’s half of the field. The Montenegrins did everything to make a miracle and prolong the match into a shootout. Still, they couldn’t. Greece kept the ball, and,, Genidounias closed the match, sending the ball into the empty net for the final score – 14:12. 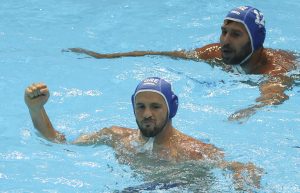 Konstantinos Genidounias, who scored five goals from six attempts, deserved to be picked the MVP of the game.

Explaining what happened during the middle break and what changed the course of the game, Greece’s center-forward Konstantinos Kakaris said:

“We didn’t play badly in the first half. Still, we were trailing by two goals. During the middle break, we regrouped ourselves, and we told each other that we had to be more focused. We improved our concentration, and that was the turning point in this game.”

“This game was more important for us than for the Greeks, because we are battling for a spot at the World Championships. We started very well and controlled the game until the middle. We could even build a bigger advantage in the first half. Anyway, we mustn’t let ourselves such a big down in defensive play. We conceded too many goals in the second half. We have one more chance to qualify for the World Championships. France/Georgia are quality teams, but I think Montenegro is better. Still we must be very well prepared for the 7th-place game.

Georgia and France fought a hard battle. Both teams have had ups and downs during the Championships, but they have proved they could play at a high level.

The score says that it was a low-scoring game in which defenses made the difference.

Georgia took an opening 1:0 lead, but France went ahead (2:1), after Crousillat converted a man-up in the 10th minute. A few minutes after, Nika Shushiashvili leveled at 2:2. Still, France’s young center Thomas Vernoux closed the first half, scoring from a 6 on 5 for 3:2 at 00:33 in the second quarter.

After the middle break, France dictated the pace. Charles Cannone made it 4:2 early in the third quarter. It was the first action goal in the game (the previous five were with a man-up or from a penalty). In the middle of the period, the French earned a penalty. Bouet made no mistake, he hit the back of the net, and France stretched the margin to three (5:2). 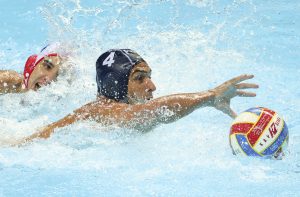 Shortly after, Georgia left without one of the key players Boris Vapenski (third personal foul), the French’s defense, commanded by Hugo Fontani, worked very well. It seemed that the doors towards a victory were widely open.

But, Georgia didn’t say its last word. Shushiashvili reduced the gap to two before the final period (3:5), and his team was back into the game.

France secured a win and a spot at the World Championships in the middle of the quarter. The Georgians had a 6 on 4, but failed to convert a double man-up – Fontani posted another save. Immediately after, Khasz scored with an extra player and his team regained a 3-goal lead (6:3).
Bitadze continued the series of goals in the next possession (4:6). But an experienced Mehdi Marzouki held back Georgia’s last comeback attempt with another power-play goal for 7:4 in the 30th minute. 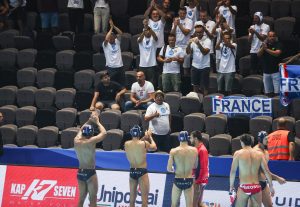 Ugo Crousillat, one of the stars of the French team, commented:

“We had a big pressure in this game. After the match against Serbia, the clash with Georgia was the most important match for France in Split, because we had a chance to qualify for the World Championships. We haven’t played at the Worlds since 2017. Too much time passed. So, we are very happy because we managed to qualify.Defense was a key for success. Maybe we weren’t so fresh for the attack at the end of the tournament. Still, we were focused on defensehe defense led us to victory.

Most of France’s goals were scored with a power play advantage – five (5/8). The Georgians’ percentage of extra player shots was significantly worse (1/7).

“We missed too many opportunities to score with a man-up and that was a crucial factor that made the difference. France also didn’t score too many goals, but they had more luck, more energy and maybe more wish in some moments. Boris Vapenski, Georgia’s leftie, said and added:

I congratulate the French, but also my teammates deserve credits, they fought hard until the end. Our next opponent is Montenegro. We played against them at the World Championships in Budapest and in the group stage here in Split. Both games were interesting and quality. I expect the game to be similar to the previous one. We’ll do our best. Whatever happens, I am proud of the guys in our team.