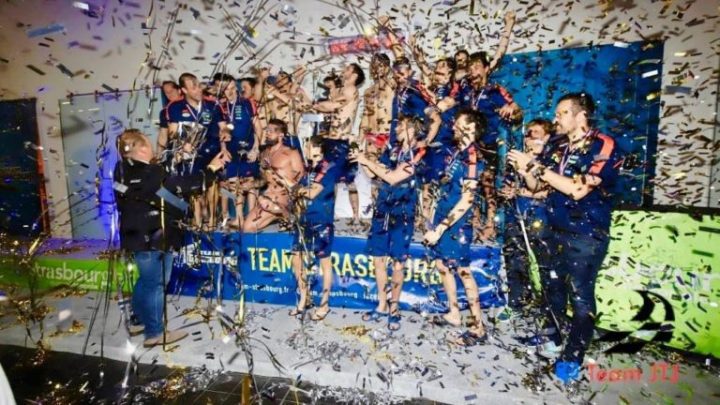 The rematch between Strasbourg and Pays d’Aix has kept all its promises, France Water Polo reports. Undefeated at home since December 10, 2016, Igor Racunica’s team got their first defeat. But still, the result was that Strasbourg got the title of Champion of France. The Alsatians have been waiting for this since 1963 (their last title of France Championship).

Two minutes was enough for Aix to catch up with the first leg (0-2). Alexandre Donsimoni‘s men were determined to bring down the second favorite of the Championship, two weeks after defeating Marseille. Strasbourg returns a goal (1-2) then Aix widens the gap again (1-3). This play was the summary of the first two periods. At half-time, it is PAN who takes the lead (3-5) and therefore ties both games.

Back from the break, Aix pushes the wings and takes a serious 4-goal advantage (3-7, in mid-3rd period). At this moment, it is the Pays d’Aix who is dominating. But Strasbourg does not go down so easy and scores twice before the end of the third quarter (5-7). 8 minutes from the end, both teams are tied in the overall core. This lasts a little more than 6 minutes (7-9 to 1:50 minutes before the end).

But then Strasbourg gave two goals in a minute — one by Marko Bratic (8-9), the other by Pierre-Frédéric Vanpeperstrate (9-9, 30 seconds from the end). Milos Vukicevic netted the last goal (his 4th of the day) at 12 seconds before the end. This goal brought the victory to PAN (9-10) but it is Team Strasbourg who gets crowned Champion at the end of the championship.

As a little consolation for Aix, who, deprived of their captain Quentin Vander Meulen with an injured finger, performed greatly. They managed to end the series with 16 wins in Strasbourg and were also the first to score more than 8 goals with Hugo Fontani. To remind, their main objective, early in the season, was to participate in the first Final 4 of their league.

Meanwhile, the Strasbourgers are finally rewarded for their efforts. They came close to the title last season and managed to be crowned this year after an almost perfect year (18 wins and 2 losses).

“The finals with Aix brought a real challenge. As they said, they had nothing to lose but everything to gain, and they gave up all their strength in the battle. They beat us from end to end. When they scored for 3-7, we begun to crumble under pressure. We thought we were going to lose something big. But in the end, we were able to remobilize, keep a cool head and return the score to bring the trophy home! It was a good match!”

“We finished a magnificent and historic season for the club. Regarding this match, we gave everything. I think that overall we deserved better… We played really good, but it was not enough. All in all, we can really be proud of our journey. I had a lot of fun playing in this team this season. Congratulations to Strasbourg for their Champion title.”

In the small final, Marseille took the bronze. After the first leg easily won in Nice (6-14), the Cercle had a lot more trouble at home. But the important thing was to finish the season well and to be able to share one last victory with the coach Paolo Malara, who was leading the Marseillais for the last time in his career.

“It was a difficult match because it was the last of the season. We started the match well and lead until the third quarter. Then we got tired a little bit and cracked on the ends due to fatigue and lack of experience.

On the other side, we played aggressive and committed. It was important for us to show a different face than last week’s counter-performance. We managed to recover and fight until the end, which allowed us to have a rather positive note, despite the defeat against a great team, to close this season which has been complicated, with a lot of obstacles on our way. I’m glad we were all able to give the best we could for the last game of the season because everything that happened this year was our success. The only thing we needed do to was to play every game thoroughly. And I think that we have been able to fulfill this objective and that we can be proud of it.”