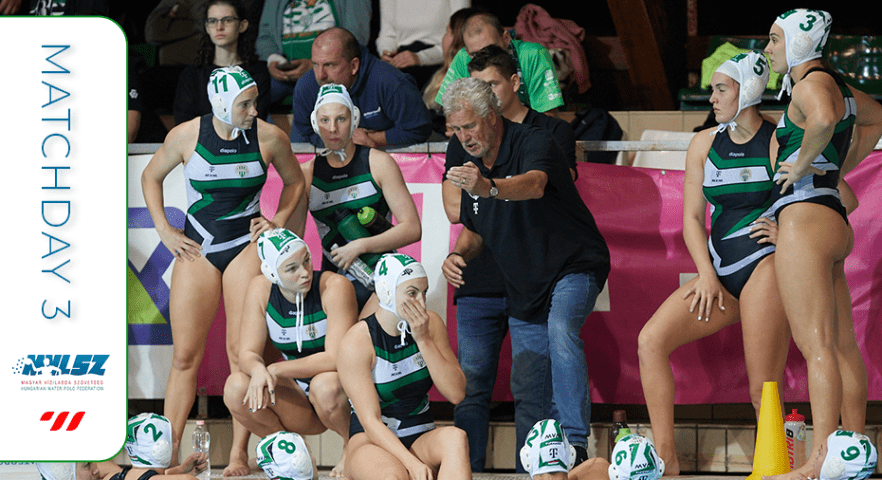 Dunaujvaros, Ferencvaros, Eger and UVSE all remain undefeated after the first three games of the women’s OB I season in Hungary

Today, Eger bossed BVSC in Zuglo, while UVSE didn’t slip up against Keruleti – who are still without any points on the board. Tatabanya rise to 6th in the table thanks to a single-goal victory against relegation fiends Gyor.

After a somewhat hectic week in the women’s OB I with three games in seven days, there is now a gap until late November, due to the World League Super Finals and the Hungarian Cup.

With another victory against Szeged on Friday evening, Dunaujvaros will be extremely pleased with how they’ve begun their OB I campaign, sitting top of the league ahead of the Autumn recess.

After a difficult midweek match against Keruleti on the road, Attila Mihok valued a strong start to the game. Geraldine Mahieu and Nora Sumegi scored early goals to put Ujvaros in the driver’s seat (6-1).

Szeged staged a brief comeback in the game’s middle, but Dunaujvaros’ captain and leading scorer, Krisztina Garda, scored three times in the second half to seal the victory.

Ferencvaros put on an absolutely electric attacking performance on Friday evening, smashing Szentes 25-5. Fradi’s attacking quality and penetration was too much for Szentes, and from the end of the first to the middle of the third quarter, the hosts scored sixteen unanswered goals.

Szentes have had three tricky games, and will no doubt welcome a bit of a break ahead of their next clash against Dunaujvaros.

Eger flexed their muscles today in a huge 18-8 win over BVSC. Eger’s best scorer of last season, Dora Czigany, netted six times, while there were four goals for Rebecca Parkes, and even a score for goalkeeper Alexandra Kiss.

Eger dominated the game when it mattered most, and got off to a blistering start, taking a 7-0 lead in the first quarter, which included three of Czigany’s goals. BVSC’s Kata Meszaros Farkas added the home side’s only goal of the half.

BVSC stabilised their game, but a second half hat-trick from Rebecca Parkes, and strikes from Csenge Szellak and Patricia Jancso put a one-sided tie to bed.

The result highlights what was already suspected coming into the season, that both teams have role-reversed; Eger are a far stronger team than last year, while BVSC are a team in slight decline. BVSC will be another of the teams who benefit from some time off ahead of a must-win game against Tatabanya when they return.

There was a significant result at the foot of the table as Tatabanya managed to hold off relegation rivals GYVSE Gyor with a narrow 7-6 victory.

In a game of relatively few goals, Tatabanya steadily amassed a cushion that eventually saw them over the line. The hosts led 5-2 at the start of the third quarter, and despite a spirited fight from Gyor, Krisztina Zaneleitner’s team did enough to get over the line.

There were double scores in the match for Petra Zink, Boglarka Orban and Eniko Rajna for Tatabanya, while Kata Kurucz and Monika Szedlak converted braces for Gyor.

UVSE  were in control on the scoreboard throughout the game, and despite awkward phases in the match, they did enough to deserve three points against a gritty Keruleti outfit. The hosts took a three goal lead in the first period, and never lost it from there.

Marton Benczur will be satisfied with their first three games, easing their way into the season. They know they have tougher tests to come, but the young team has shown they have the ability to win, but several players have shown they can take on the responsibility to score; 16-year-old Kata Hajdu provided five today, Kinga Peresztegi-Nagy converted seven on Wednesday afternoon, and Panni Szegedi grabbed five last weekend.

Keruleti are still without points, but they have had an extremely tough run of games to start their season. Denes Lukacs will be generally encouraged by what he has seen from his team so far this campaign.