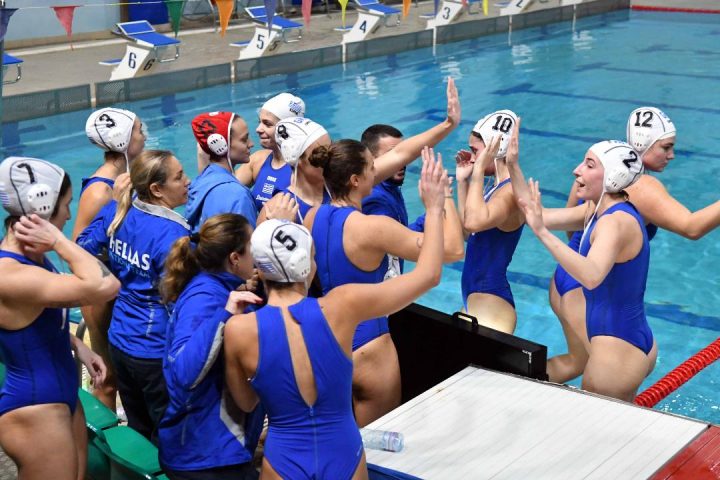 It took a penalty shootout for Greece to eventually defeat Hungary by 15 goals to 14 in Group A of the FINA World League European Qualification competition. In a hugely entertaining game in Patras, both sides played some great water polo in front of a packed out and noisy Greek crowd. The atmosphere was electric, and the water polo was equal to it.

Hungary started the game well, but seemed to lose a bit of control towards the end. It took a Panni Szegedi goal with a second on the clock in the fourth to even take the game to penalties. With the age and experience advantage firmly in the Greek camp, they held their nerves, and won the match.

Despite a frustrating result for Atilla Biro and his very inexperienced side, they should take huge heart from their performances, particularly from the likes of Rebecca Parkes, who was outstanding, Kamilla Farago who netted three goals in the game, and Panni Szegedi, who netted a brace.

Greece once again will be fully grateful that they have Eleftheria Plevritou, one of the world’s very best when on form, in the side, who scored 5 in the game, and her left-handed Olympiacos teammate, Eleni Xenaki, who bagged a hat-trick.

Earlier this evening in Group B, Russia ran out 11-5 winners against Italy in Ruza.

Hungary started the game far better than Greece, who really needed to build their way into the game. Come the end of the game, Greece looked like they could score at will, while the Hungarians were struggling.

Perhaps the inexperience in Atilla Biro’s side showed, but for such an inexperienced side to put such a fight up away from home should be a big positive for this Hungarian team.

At times, you worried for the Greeks, as they just seemed to lapse in concentration for a second, allowing the visitors a chance in the game. If they can cut out the mistakes, Alexia Kammenou could really be building something with this group of players.

The opening minute was played to a really high intensity, but it was Panna Szegedi who made the direct swim towards the Greek goal, and gave the Hungary captain, Krisztina Garda, the opportunity to open the scoring from the 5m penalty mark – which she did.

It was Szegedi again who made a big contribution for Hungary’s second goal. She fed Rebecca Parkes in the pit to win the exclusion, and UVSE’s Kamilla Farago did the rest with three excellent fakes before making it 2-0.

Alda Magyari ensured it stayed at 2-0 with a fabulous save from Tina Kontogianni, but she could do nothing moments later when Eleni Xenaki’s shot was driven low into the water, and bounced into the roof of the Hungarian’s net to make it 2-1.

Before long, the Greeks were level. Dorottya Szilagyi was excluded from in the bucket, and Olympiacos’s Eleftheria Plevritou made no mistake, despite Magyari getting a finger on the ball before it went in.

However, Hungary were keen to silence the dozens of fans who had congregated in Patras for this one, and it was Rebecca Parkes, who plays her polo in Greece, who converted to restore Hungary’s lead.

Thirty seconds from the end of the quarter, Maria Patra thought she had levelled the game up going into the second period with a great shot into the top left corner, but Panni Szegedi had a different idea, with her near-post shot alluding Ioanna Stamatopoulou to end a thrilling quarter with the score at 4-3.

Into the second, Hungary won the swim off again, but it was the Greeks who got the first score in the quarter. Tricha Foteini had the ball on the left on a man-up, and despite a seemingly harmless shot, Hungary’s young keeper could not keep the ball out of the back of the net.

But Attila Biro’s side were not fazed. Panna Pocze received the ball to left hand-side on 5m, and thundered a ball into the back of the net, via the underside of the Greek cross-bar to make it 5-4.

Greece probably should have equalized not long after, when Maria Patra had the whole goal at her disposal from a rebound, but a Hungarian goal line block kept the score at 5-4. Greece had another great chance from Panna Pocze’s exclusion on the counter defence, but Eleftheria Plevritou was wasteful, and could only find the arms of Magyari from a tight angle.

Hungary then made the hosts pay, as Ferencvaros’s Szonja Kuna found she had time and space to measure a shot from the top, and she rifled the ball into the back of the net to give her side a two goal advantage.

With two minutes to go, there was a sudden flurry of exclusions, two for Hungary (Parkes and Leimeter) and one for Greece (Xenaki). Alexia Kammenou’s side enjoyed a 5 on 4 situation, and despite a timeout being called, the Blue and Whites couldn’t quite take advantage. With the halftime whistle, the score was 6-4 to Hungary.

Hungary again had the first spell of possession in the third, and despite the excellent work from Parkes to earn the exclusion, Kamilla Farago couldn’t beat the block of Eleni Xenaki.

Greece continued to search for a fifth goal, but E. Plevritou and Foteini both had wayward shots that untroubled Magyari.

Then, out of nothing, Greece scored a beautiful goal courtesy of Eleftheria Plevritou. Her sister, Vasiliki, had the ball on 8m, and made a long looped pass into her namesake, who quite spectacularly flicked the ball over the head of Magyari and into the top right-hand corner of the net.

Hungary, however, restored their two goal lead with four minutes to go in the quarter. Greece were unable to clear the ball to safely after Krisztina Garda’s initial shot, and when the ball found its way back to the Hungarian captain, she drove into 4m and planted the ball past a helpless Stamatopoulou for her second goal of the game.

However Greece were soon level. Firstly, on the next attack, Zsuzsanna Mate was excluded. With a quick pass, Eleni Xenaki found herself as free as a bird on the right, 3m from goal, and with her capability, she was never going to miss to bring her side back within a single goal. Then, with two minutes in the quarter left, Krisztina Garda gave away a penalty that was scooped up gratefully by Eleftheria Plevritou for her third goal of the match.

There were then two very quick goals for either side before the end of the period, Hungary’s came via Tamara Farkas of BVSC, and Greece’s saviour was Eleni Xenaki, who like Plevritou, also had a hat-trick.

Into the last period, it was Greece who won the swim off, and the young Maria Myriokefalitaki was unlucky to have her backshot well saved by Alda Magyari’s quick reactions. Hungary then also had a decent chance to take the lead when Ioanna Chydirioti was excluded, but Parkes could only put the ball over the bar.

But finally, with six minutes to go, the hosts took the lead for the first time in the game, and it was Maria Myriokefalitaki with goal from the pit. She had warned the Hungarians a few moments earlier that she meant business, and she showed that she wasn’t going to pass up another opportunity.

However, a lapse in concentration for the Greeks handed the Hungarians a free goal. Ioanna Stamatopoulou was perhaps harshly given a exclusion when reaching for the ball, and without a recognised goal keeper in the pool, Dora Leimeter made it 9-9.

Eleftheria Plevritou then gave her side a 10-9 lead on a man-up, but it was almost immediately cancelled out by the outstanding finish from Kamilla Farago, to make it 10-10.

With three and half minutes to go, Greece took the lead again, with Vasiliki Plevritou completely wrong-footing the Hungarian keeper to drive the ball into the bottom left hand corner from a central position on 6m.

Having played well throughout the game, Hungary needed a solution now they were behind. But with shots that went awry from Farago and Mate, time was on the side of the Greeks. And even with a timeout from Atilla Biro, Hungary couldn’t find a way through like they had earlier in the game. You got the sense that perhaps the lack of international experience in some departments could be Hungary’s downfall.

The drama then began. With one attack left, Alexia Kammenou called a timeout, but the ball was turned over by her side. And remarkably, with less than two seconds on the clock, Greece completely lost concentration which allowed Panni Szegedi to level the game up right on the buzzer, sending the game to penalties.

And so to penalties, and while the experience Dora Leimeter hit the post on her penalty, and Eleftheria Plevritou scored hers, Hungary’s Krisztina Garda converted before Eleni Xenaki missed hers with a great save from Alda Magyari.

Zsuzsanna Mate and Vasiliki Plevritou both converted to level the shootout, but the all important penalty miss came from Tamara Farkas for Hungary.

Despite Kamilla Farago putting her 5m penalty away, Greece won the game thanks to Tricha Foteini and the winning penalty from Tina Kontogianni.