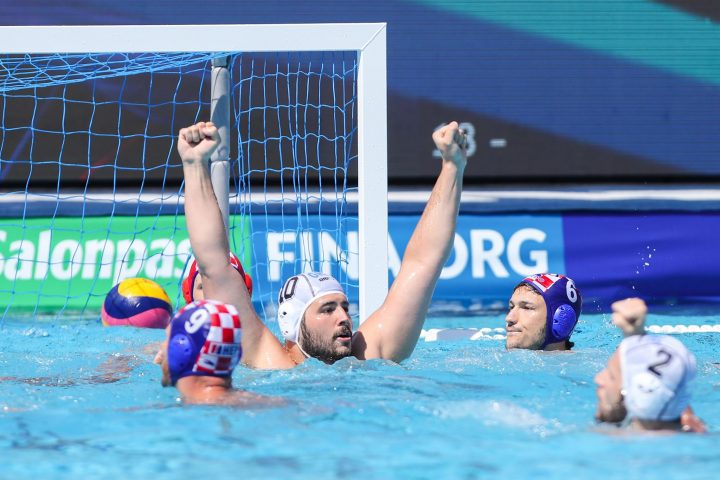 Greece won its third bronze medal at the World Championships.

The Greeks beat Croatia, the 2019 bronze medalist, (9:7) in the third-place match at the 19th World Championships in Budapest and reached the podium for the third time in its history, after bronze medals in 2005 and 2015.

Besides, the Greeks broke Croatia’s magnificent row of seven medals. Between 2007 and 2019, the Croats won a medal at each of the seven World Championships. But, the series ended today.

A great opening of the match put the Greeks on the right track. They earned a 4:0 lead. In the middle of the second period, Croatia started chasing the rival. Still, the Croats managed just to cut the deficit to one early in the third period (5:6) and didn’t equalize.

Greece, the Olympic silver medalist, is the only team that won a medal both in Tokyo and Budapest.

For the first time after the group stage, Croatia had 13 players on the roster, because Rino Buric’s suspension had expired. But, Greece head coach Theodoros Vlachos didn’t have all players available. He could count on only 11 players. Alexandros Papanastasiou wasn’t on the team due to an injury. Besides, first-pick goalkeeper Emanouil Zerdevas still hasn’t recovered from an injury suffered in the quarterfinals. He was on the bench, but he wasn’t able to play.

Panagiotis Tzortzatos was between the posts throughout the match. He commanded Greece’s defense very well. Croatia was goalless until the 13th minute. Tzortzatos posted 18 saves today!

The best player of the 2022 Croatian League, Jug’s center-forward Konstantinos Kakaris, scored an opener in the 6th minute. He added one goal in Greece’s first possession in the second quarter. Shortly after, Dimitrios Skoumpakis found the net from the left, and Greece had a 3:0 lead in the 10th minute. Croatia continued missing their chances and paid for it. Argyropoulos gave the Greeks a 4:0 lead in the middle of the quarter.

Three and a half minutes before the middle break, Croatia finally got on the scoreboard after Bukic converted a man-up. But, Fountoulis replied immediately in the same way for 5:1. Still, the Croats managed to come back into the match. In the 14th minute, Fatovic scored from a 6 on 5. Then, Greece missed its opportunity with an extra man. At 01:13, Tzortzatos saved a penalty shot from Kharkov. In the last minute of the first half, the Greeks missed another man-up. A young Marko Zuvela closed the first period by scoring three seconds before halftime.

Luka Bukic found the net at the beginning of the third quarter and the Croats trailed by one goal (5:6). Still, the Greeks scored three unanswered goals in three and a half minutes (Kakaris, Argyropoulos, Vlachopoulos), to jump to an 8:4 lead (22nd minute). From that point on, the difference was never smaller than two goals. 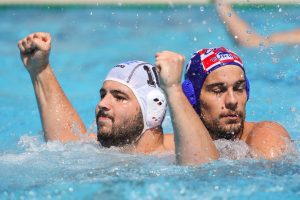 Croatia responded with two goals (Kharkov and Marinic Kragic) and halved the distance (6:8) in the 25th minute.

In the following minutes, defenses dominated. Tzortzatis and Bijac posted a few nice saves. That rhythm of the game suited the Greeks. The clock was running too fast for Croatia. At 02:15, Genidounias converted a man-up. The goal was confirmed after a VAR review (the referees watched if the shot clock expired before or after the shot). The Greeks rebuilt a 3-goal lead – 9:6. In the next attack, Tzortyatis saved a power-play shot from Luka Bukic and Greece’s bench already started celebrating the win. Vrlic scored a consolation goal for Croatia with 24 seconds remaining. After that, the Greeks held the ball, waited for the final buzzer, and officially became the bronze medalists.