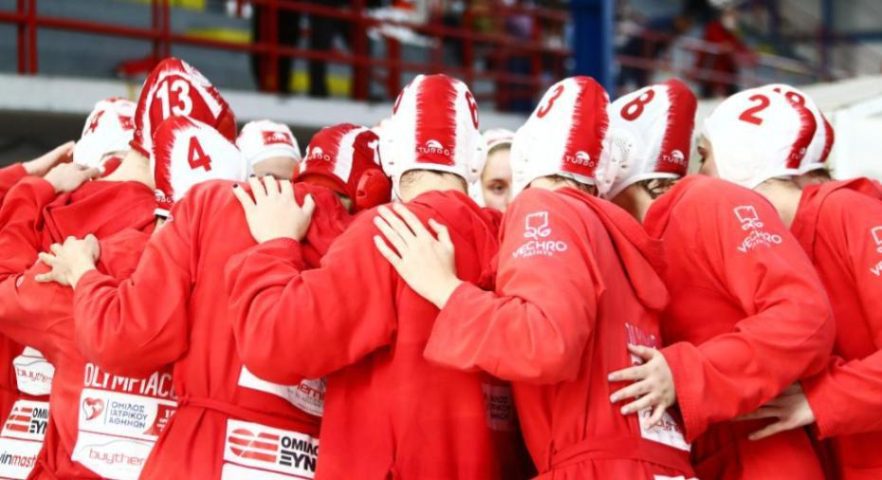 This weekend marks the start of the highly anticipated 2022-23 season of the women’s Greek A1 league, and we are excited to provide an in-depth preview of the upcoming season’s action.

While there is a clear favourite in Olympiacos, nothing is concrete. The standard of the league has increased considerably on last season, meaning there will be close battles up and down the division.

In terms of participation, Olympiacos, the current champions and winners of nine straight titles, are one again joined by Vouliagmeni (eleven-time champions) and Ethnikos (three-time champions and current holders of the LEN Trophy). On the other side of the coin, this will be the first season for both Alimos NAC and Peristeri SC in Greece’s top flight, and they will each be looking to leave their mark on the competition.

Before the play-offs begin, there are a total of 22 match days that take place during the regular season of the league.

First game of the season: Peristeri (A)

Let’s begin with the defending champions, Olympiacos, who are also the odds-on favourites to win the championship again this year. After achieving an unprecedented quadruple last season, Aleksandar Ciric will attempt to achieve another monumental feat with the club by leading Olympiacos to their tenth consecutive national title.

Eleftheria Plevritou, the tournament MVP, is one of eight red-whites returning from the European Championships in Split with a silver medal, while two Olympiacos summer signings, Ioanna Chydirioti and Stefania Santa, were also members of Alexia Kammenou’s medal-winning squad.

Despite Brigitte Sleeking’s departure in the summer, their team is not significantly weaker and might just be that little bit stronger. Olympiacos is the best team in the division, and they will have aspirations of not only winning the league, but also of winning a third Women’s Champions League title in a row. 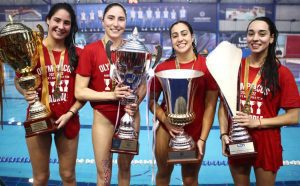 Although Glyfada were well-beaten by Olympiacos in the championship play-off finals last season, they can take some sort of solace in the fact that they were the ‘best of the rest’.

When competing in the league against teams like Olympiacos and Vouliagmeni this season, Theodoros Andreakos will want his squad to demonstrate a higher level of consistency than they did last campaign. Since they were also eliminated from the Champions League group stage too easily the previous season, ANOG will also have room for improvement in their European campaign this year. They host the qualifying round Group B – alongside ZV De Zaan, CN Terrassa, Grand Nancy and ZF Eger.

Glyfada did very well over the summer to keep the leagues top goal-scorer from last season, Eirini Ninou, and with the addition of Iris Wolves, who will be playing alongside her fellow countrywoman Ilse Koolhaas, Glyfada will be in and around the top four again this season. 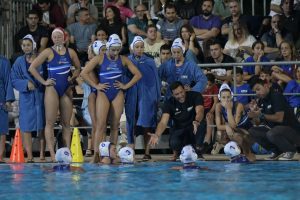 First game of the season: ANO Glyfada (A)

From all the other teams in the league, Vouliagmeni will believe that they have the best possibility of challenging Olympiacos for the championship this season. The eleven time champions of Greece looked pretty sharp at the SEDY Cup over the weekend, where they went five games unbeaten.

Having hired a former great player Kiki Liosi as their new coach and bolstered their roster with notable additions over the summer, including Eleni Elliniadi and Emma Wright, the Nautical Club is poised to once again be a powerhouse in the league. 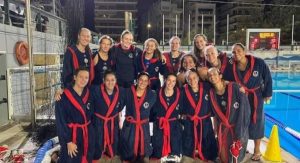 It’s fair to say that Ethnikos could be in for an anticlimactic season. With the departures of coach Antigioni Roumpesi and key players like: Ashleigh Johnson, Stef Haralabidis, Rebecca Parkes, Verica Bakoc, Eleni Elliniadi and Ionna Haralabidis, the honeymoon period for the LEN Trophy winners of last season might well be over.

However, Stefanos Leandros is now in charge of the club, and he has recruited two players with international experience: Maria Borisova, the Russian formerly of Plebiscito Padova, and Charlize Andrews, an Aussie Singer, formerly of Queensland Thunder. A key bit of business for the club this summer was renewing the contract of their goalkeeper, Eleni Sotireli, for what is now her 5th season at the club.

The team may not possess the same prowess as it did last season, but it still has high expectations domestically and in the champions league. 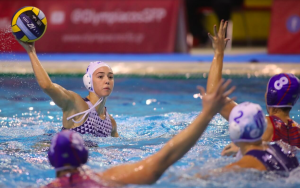 First game of the season: NC Vouliagmeni (A)

AEK are another team to have appointed a new coach, and they have opted for the experience of Serbian coach Marko Misic – who joins from the bench of Ethnikos.

The yellow and blacks have not historically had a great deal of success, but they should be able to easily maintain their position in the division given some moderate additions to their roster during the summer. Europe might be a stretch, but we will see. First game of the season: NC Larissa (A)

The Panionios women’s team is continuing to improve, and they are currently holding their position in the top division of the Greek league fairly securely.

Tassos Papanastasiou has made some excellent signings over the summer, including the Australian Stinger Pascalle Casey and the young Greek goalkeeper Lydia Mavrotas.

With the summer renewals of Efgenia Mavrotas and Maria Bogachenko, Panionios is in a strong position to compete in the midfield of the A1. 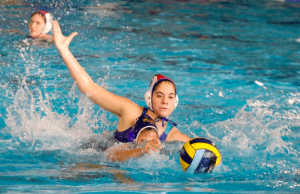 First game of the season: Panionios GSS (A)

NC Patra, a mainstay of the Greek league, is returning for their 22nd season in the country’s top division of women’s water polo. The Dolphins were at times very promising last campaign, and another of the newly appointed coaches, Michalis Lazaridis, will be hoping that his team will be able to replicate those performances this season. Patra will look to finish mid-table. 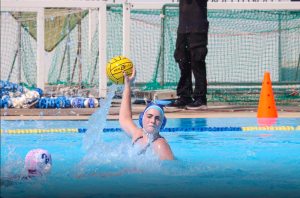 Larissa is a small club with modest aspirations, but enjoyed a fairly comfortable mid-table finish last season. The club will attempt to repeat its eighth-place finish from the previous campaign.

Captain Athina Koltsida leads from the top, and two promising British players, Kathy Rogers and Annie Clapperton, bolster the team on 2m at both ends of the pool. 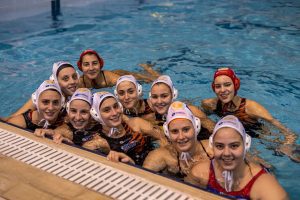 First game of the season: Ethnikos (A)

Rethymnou will be doing well if they can finish anywhere above the bottom quarter of the table. The fact that Anestis Peshmatzoglou’s team did not make any significant additions to its roster over the summer is a problem for the team. To make matters worse, their two Canadian stars, Kelly McKee and Amanda Amarosa left in the summer. This season could prove to be particularly difficult for Reythmnou given the competitive appearance that Alimos and Peristeri have, in addition to the investment that PAOK has made. 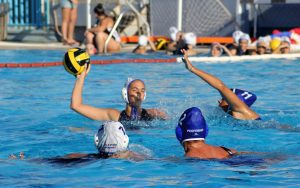 Despite finishing the lowest of all the teams currently still in the division, PAOK have added five players to their team over the summer, including the hugely experienced former Russian international, Ekaterina Pustynnikova, as well as Alexia Tzurka in goal, and three players from Larissa: the Karipidou sisters and Eleftheria Tzelepi.

This year’s iteration of Panagiotis Vergos’s squad will look slightly different, and the club will hope that the signings will demonstrate a marked improvement compared to the previous campaign. 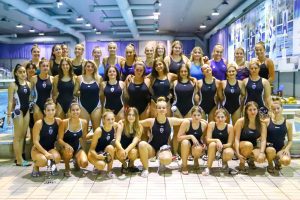 Position Last Season: Promoted from A2

First game of the season: PAOK

We arrive at Alimos NAC, the first of the two newly promoted teams. Alimos have already proven their mettle at the SEDY Cup, and their massive investment in the team will make them one of the teams to watch this season.

The squad available to Vangelis Pateros is now more than capable of finishing in the top half of the table, and may even be capable of finishing in the top four. Alimos have brought in two quality foreign players, Bella Markoch and Lena Mihailovic, as well as investing in some quality young Greek players, such as Maria Karagianni, Nefeli Chaldaiou, Nefeli Kovasevic, Stavroula Kirkou, and Evdoukia Tsimara. The team is led in the pool by the all-time leading scorer in the Greek A1, Alexandra Asimaki.

With the emergence of Alimos, the league has not become weaker; there is no doubt that they will provide entertaining games throughout the season. We will have to wait out to see how far they can go, but if they play to their full potential, they have an outside chance of making their top-four dream a reality. 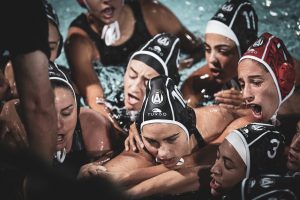 Position Last Season: Promoted from A2

First game of the season: Olympiacos

Peristeri are the other team to have been promoted from the A2, and while they haven’t acquired the names of their fellow promotees, Vangelis Patras and the recruitment team at Peristeri have done some really shrewd business over the summer.

The club has worked diligently behind the scenes to give the team the best possible chance of staying in the division this season. Peristeri have made some key renewals such as the captain Xenia Petta and Katerina Apostolidou, but have also brought in a balance of experience and youth – securing  the signatures of several other A1 players such as Myrto Gotzia from Ethnikos, Myrto Kassari and Smaragda Grozopoulou (both from AEK) and Angeliki Kolitsopoulou from Glyfada. Peristeri have also signed two keepers, one of whom is the vastly experienced former Greek international and  Olympian from Beijing 2008, Maria Tsouri. 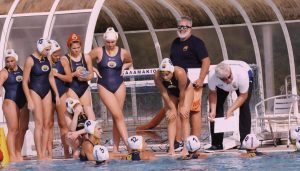 Please note: Fixtures could be subject to amendment at the discretion of KOE, the Greek federation. Total Waterpolo is not responsible for any changes to the schedule of fixtures.