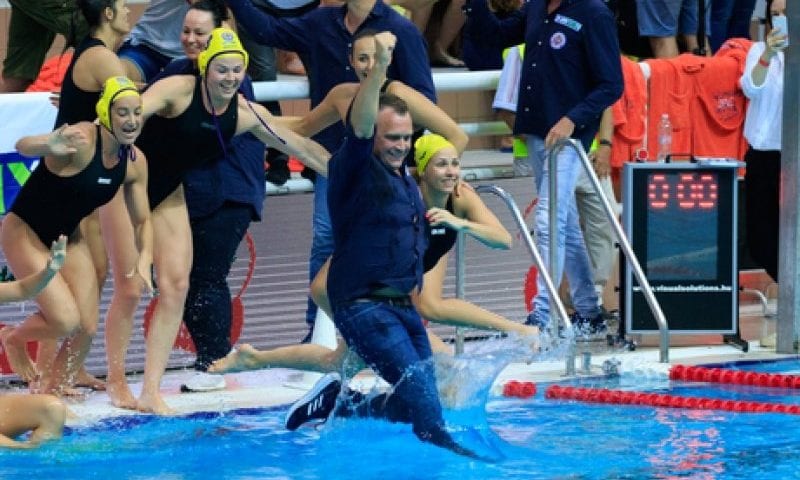 The Hungarian water polo portal, NVLSZ, brings news of the finals in the women’s national league. They have written a detail report of the final matches.

Márton Benczur’s team was unstoppable in the third leg of their championship final at home against Dunaújváros, winning 9-5 and ensuring that the club from Budapest won this best-of-five contest 3-0 and therefore their fourth domestic league title in a row.

Márton Benczur gesticulated to the clock in front of his players and loudly reminded them: “Girls, stay calm, play till the end!”. But it was in vain. UVSE’s players were unable to carry out his instructions and instead lost the ball, from which Hlengiwe Mchunu finished off a swift counter-attack to level the scores at 3-3 going into the half-time break. This perfectly exemplified the lack of concentration in the first half on both sides, mistakes being far more accountable for the low-scoring nature of the contest rather than any goalkeeping or defensive heroics.

Dunaújváros won the first quarter with a single goal from Gréta Gurisatti before Maggie Steffens opened UVSE’s account early in the second period. Brigitta Horváth restored the visitors’ early lead but Rita Keszthelyi handed the hosts an equalizer from a turnover and then edged her side into the lead before Mchunu’s intervention before the ‘big’ interval.

Clearly, the coach of neither team was satisfied with performances thus far but everyone knew that tense matches with much at stake often suffer in terms of the quality produced. There were some impressive moments though, not least Gurisatti’s early third-quarter goal from a turnover or, for UVSE, Vivien Takács’ equalizer and Edina Gangl and Alekandra Kiss’ saves in the goal.

Steffen’s and Keszthelyi’s action goals put the reigning champions back in front at 6-4 at the end of the third quarter and it was the latter who scored her fourth goal and perhaps the decisive strike of the contest from a five-meter penalty to stretch the cushion to three. Steffens made it an insurmountable 8-4 two minutes later and although Fanni Vályi pulled one back, it was perhaps fitting that team captain Dóra Csabai capped another fine day for UVSE with her team’s ninth goal and the final one of this domestic season, the 9-5 result confirming for her side a 100% winning record this domestic season and therefore a richly-deserved fourth championship success in a row!

“There were those who said before the final that we should really beat Dunaújváros and those who went further by saying it was essential to win against all three of the first matches too, but I find this incomprehensible. Our opponent was an outstanding team which was just four seconds away from qualifying for the Euroliga Final Four this year. Yet, with systematic work, we were able to defeat them, something which gives me great joy.

Our team hasn’t been quite at full strength in any of the matches due to players becoming mothers, illnesses, and injuries but we’ve gone unbeaten in becoming league champions. We’ve won the Hungarian Cup, the domestic Super Cup and were only beaten in normal time in our Euroliga semi-final, so we have no reason to feel down. I congratulate the girls and thank the club for their support!”

“We’ve been overcome in a tremendous wrestle in all three matches. Physically, UVSE are a stronger team with a better sense of positional play so we had no chance of winning in matches such as these. We would have put the emphasis on a defensive style of play but UVSE, on the one hand, didn’t allow us to get into that routine and on the other hand, when we did have a small opportunity, we had run out of confidence.

I expected more from us but we didn’t have a realistic chance of the league title. The 3-0 outcome of the final tie unquestionably signals that this is the reality. I congratulate UVSE! We will continue to work hard and perhaps we’ll be more experienced in another year’s time.”