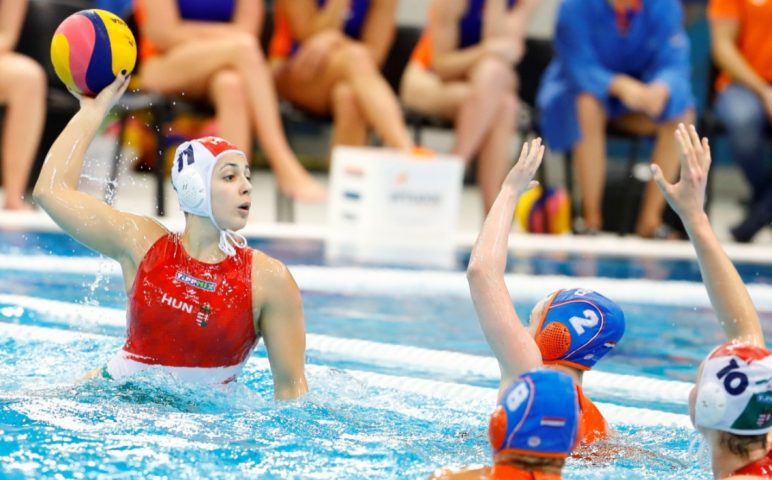 Hungary got the better of the Netherlands this evening in a entertaining World League contest that ended 11-9. In front of a packed out crowd, the hosts beat the Dutch for the second time in a row – with the last being at the Tokyo Olympics in the quarter-final, with Attila Biro’s side winning 14-11.

The Netherlands put up a strong fight in the second half under their new coach, the former two-time Olympian, Bas De Jong, but it just didn’t come off for them today. There is no doubt that their team is vastly talented, even with the reserves they had today, but they made too many mistakes, and did not convert their man-up opportunities well enough. The found themselves 5-1 down at one point too, which is something you really can’t do if you expect to beat a top side like Hungary.

The Dutch relied on the goals provided by the spectacular left-handed Simone Van de Kraats (4) and centre-forward Iris Wolves (2) – both of whom are currently playing their water polo in Spain. Brigitte Sleeking, of Olympiacos, converted on three occasions.

However, tonight was Hungary’s night on the banks of the Danube, with particularly strong individual performances from some of the newer faces in the team, as well as some of the more established players. Greta Gurisatti netted a hat-trick, while Ferencvaros’s Dalma Domsodi, who was probably Hungary’s best player, secured a brace. Kamilla Farago of UVSE, who is well worth her place in the team, also netted twice.

Former French international, Geraldine Mahieu, finally donned the  Red, White and Green of Hungary for the first time, while on the opposite end of the spectrum, Rita Keszthelyi-Nagy celebrated her 300th appearance. Dorottya Szilagyi, Anna Illes and Rebecca Parkes were all not in the matchday squad for the Hungarians, who will only get better with those players returning.

The Dutch took the lead in the game with an extra-player conversion from Iris Wolves. The Mediterrani forward, who has scored 25 goals this season for her club, took full advantage when Vanda Valyi was excluded.

However, the Hungarians turned the quarter around with two goals from their number 4, Greta Gurisatti, to take a 2-1 lead at the end of the quarter.

Into the second, there were a flurry of exclusions for both teams, but then a glut of goals for the home side. Brigitta Horvath firstly converted from a Schaap infringement, before Vanda Valyi countered to make it 4-1. Dalma Domsodi then put the Magyar’s 5-1 up with three minutes to go in the quarter.

Brigitte Sleeking pulled one back for the Dutch, and then the Oranges were quite fortunate that Simone Van de Kraats was on hand with five seconds to play in the period to put them back within striking distance.

Sleeking then added her second to make it 5-4 into the third, to put Hungary on the ropes a little, but Attila Biro used all of his experience to call a timeout midway through the quarter. Whatever he said seemed to work, as before long, Hungary reinstated a three goal lead, firstly from DVFE’s Krisztina Garda on the man-up, before Kamilla Farago made it 7-4 a minute later.

Van der Kraats secured another goal a few attacks later from the right, but Natasa Rybanska thundered home a strike 6 seconds from the buzzer to halt all the momentum the Dutch may have had.

The last period saw the nail in the coffin for the Dutch. Domsodi made it two for her on the night within the first attack of the quarter, and while Van de Kraats scored two on-the-trot, the result was ultimately beyond doubt when Hungary converted twice in quick succession – firstly with Gurisatti not moments after Van de Kraats’s fourth goal, before Farago secured her brace after Fleurien Bosveld was too heavy in the defence.

Sleeking and Wolves led the charge in the last ninety seconds of the game, but Hungary held out for valuable points after their opening day defeat on penalties to Greece.