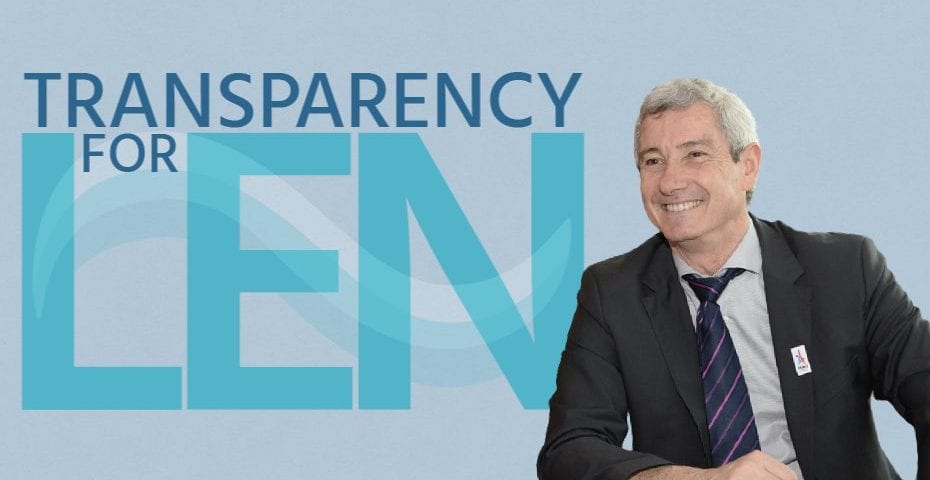 Gilles Sezionale is the President of the French Swimming Federation and LEN Bureau member for the last three years. Since he is the only opponent for Paolo Barelli’s presidency in tomorrow’s LEN elections, we wanted to know his plans for water polo if he manages to win. This is his exclusive interview for Total Waterpolo.

One of the 12 commitments for an ethical and transparent LEN you list in your program is to “increase the number of swimmers in all 52 countries”. How can that be achieved in water polo?

If we consider only water polo, this is not an easy task as for non-swimmers and their families, it requires to be aware of the existence of the sport. Then it needs to be appealing and the infrastructure should be accessible. Different axis are to be explored to give more visibility to water pol :

What can LEN do to grow (and improve) women’s water polo?

That is a challenge as previously evoked, girls & women need to know what is possible.
Today water polo is being played in big clubs but just a small part of the European women’s population has the chance to play water polo either in competition or as leisure.
For example, in France, we have more than 200 water polo clubs but only about 20 have a women’s team registered for competition. Therefore, we first need to give women the will to play.
The above-mentioned axis, notably the media coverage can be a lever. In addition, as swimming is part of school program so should it be for water polo thus enlarging the base of women water polo players.

From the competitive sport aspect, it is necessary to do an introspection. Today, 6 nations are dominating in Europe for many years, sometimes with really good results at the Olympics Games and World Championships. Nevertheless, it is now time that other nations join the battle in the competition. One of the main issues to that might be the cost to build a program to become competitive therefore LEN should be a key player in accompanying those Federations.

For National Teams, training camp hosting several nations could create emulation and common progress. As for the Youth, a training camp based around players’ development and improvement could be set in place.

In 2013, LEN launched a new format of the water polo Champions League. In your opinion, is the current model good? Is there a need for improving the current format?

The Champions League is a great competition as it allows the best clubs to compete regularly against each other and proposes a fine show to the fans. This competition would gain in integrating clubs from more different European countries. But seeing the efforts made by the French clubs to play and perform in the Champions League, I know that it is complicated and it comforts the absolute need to develop the youth program.

Regarding the format, personally, I am not the biggest fan of the Final Six or Eight. I understand the interest in terms of business, but the grande finale of the competition is sometimes deceiving due to the intensive series of games to be played in a short time.
Luckily, players are champions and as great athletes, they manage to keep their high engagement and intensity. Nevertheless, the performance is not at its peak as it should be. In my mind, teams should reach their maximum potential and be able to the semi-finals and finale at their top shape, not in the last stretch of a 3-day competition.

Is LEN able to secure higher awards and to reduce the clubs’ costs in the Champions League? For example, EHF (handball) Champions League winner gets 1,000,000€; while the European champion in water polo earns 52.000€, which is less than the money it has to pay to play in the CL.

It is a tricky question as I do not have all the financial elements around that competition. I have seen the comparison made between the different competitions in handball or other sports. Effectively it seems that the sharing is not based on the same criteria. It is always good to question what can be improved, therefore LEN should look at how to improve its current model.
Nevertheless, the comparison is to be carefully done as the revenue generated by competition is linked to the media coverage and audience. On this aspect, water polo and handball are probably not standing on the same level.

Besides the aspect on the return of investment or prize money, I do think that the problem is more global. LEN has to guide its disciplines and encourage the population to play the game. This needs to be adapted to the size and power of our events, revenues generated and our clubs to find the best business model. Clubs need to be great at a competitive level but also guarantee that the youth and mass participation is done properly as to not endanger their model.

Do you plan some reform projects for the European water polo competitions for national teams?

At the moment, I have no plan to change everything as this is a deep and thorough reflection that we shouldn’t do by ourselves. It requires involving FINA in this work along with external parties linked to marketing and TV for example. The aim should formalize:

Do you plan any changes in terms of internal organization and processes?

As exposed through my 12 commitments, it is necessary to put in place more transparent and ethical governance. The use of technology to increase the frequency of exchanges and thus allow the sharing of information and decisions is a key point. LEN must be a meeting point, discussions at the service of federations and aquatic disciplines.
In addition, a more structured organization with roles and missions defined for each will allow greater accountability of actors and constructive collaboration

This is to be implemented both in the LEN Bureau, Committees and Commissions as well as in the office.

Results are the main indicators of any athlete’s success. Is it possible to expect that LEN will transparently communicate their project goals (measurable targets) and make outcome-based decisions about employee performance? In short, move away from political decision making and towards a business mindset?

The employee’s work should not be called into question because they are fully and passionately involved on a daily basis to ensure that LEN’s activities run smoothly. The employees implement the decisions and orientations taken by the LEN Bureau. As a first step, it is a question of reaffirming transparent governance with clear objectives. It is therefore up to the LEN Bureau to install a positive dynamic and with key indicators of success. This will subsequently follow on employee engagement.

How do you assess your chances of becoming the president of LEN?

We tried our best in 3 months to meet all the European Presidents that wanted to meet us. We explained, listened and shared all we have to give. Now each one has to decide on his own and with future and better governance as mind-set.

Whatever happens tomorrow, I will continue to propose to all Federations that want to work together on a platform of exchange that LEN is not providing them today.

You can read more about Gilles Sezionale’s program on his web site transparencyforlen.eu The LEN Elective Congress will be held on Sunday, November 8. The national federations that are members of LEN will elect a new President, LEN Bureau members for the term 2020-2024, and the candidates to the FINA Bureau (2020-2025).