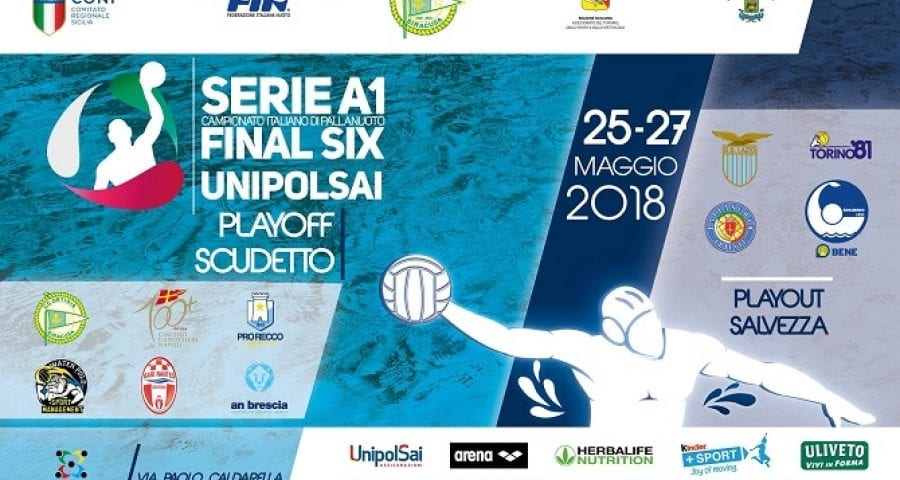 It is the beginning of the Final Six and the playoffs for the 99th men’s water polo championship. The F6 UnipolSai will take place at the “Paolo Caldarella” swimming pool from 25th to 27th of May, as reported by FIN.

The matches will be broadcasted live on Water Polo Channel and on Rai Sport + HD.

After their Italian Championship win (7:5 against Brescia), Pro Recco will attempt the Grand Slam while waiting for the Champions League Final Eight set in Genoa, from the 7th to 9th of June. The dominating Italian champion (since 2006 to today), have completed the regular season with maximum points. Their last loss was on May 7, 2017, against Brescia which stopped their 73 consecutive victories — the longest winning streak in Italian team sports.

AN Brescia will first face the Ligurians, who will also play Pro Recco in the quarterfinals of the Champions League. Brescia, who has been chasing the title since 2003, got defeated three times by the Biancocelesti.

The outsider of the League — Banco Bpm Sport Management — will play CC Napoli, the team with the top scorer of the championship, Campopiano, with 61 goals. The match between CC Ortigia and RN Savona will conclude the quarterfinals.

Saturday and Sunday are the relegation days. In the semifinals, SS Lazio Nuoto will play Reale Mutua Torino 81 Iren and Bogliasco Bene will clash with Pallanuoto Trieste. The semifinals will start a game of Russian roulette that will decide which team retreats to A2 series, down with Acquachiara.

Sunday brings the finals, along with the traditional seasonal meeting of the leaders of the Italian Swimming Federation at 11:30. The leaders will meet with the companies entitled to participate in the 2018/2019 Championship to define the guidelines for the next two years and deepen international activities.