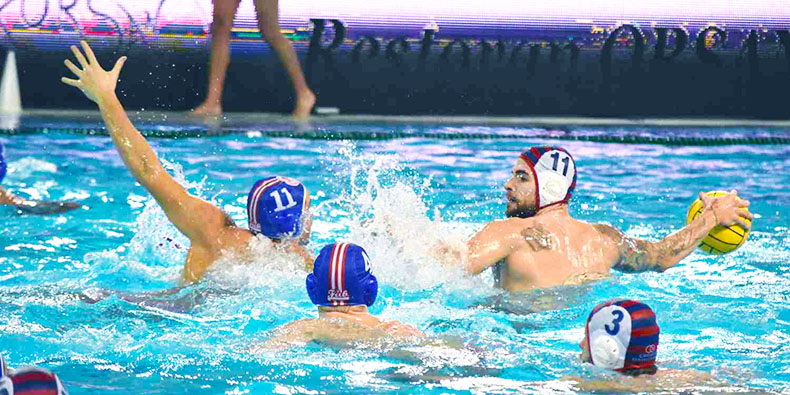 Both group leaders Recco (ITA) and Jug (CRO) went on winning and closed the first half of the prelims with a perfect score-line. BPM (ITA) and Barceloneta (ESP) added hard-fought victories to stay close on the second place, while title-holder Olympiacos (GRE) might get into trouble after another loss, this time in Dubrovnik.

A real thriller kicked off the 7th round in Group A. Super Cup winner Ferencvaros led for most of the time against Brescia only to see the Italians jumping to a stunning 6-8 lead in the fourth period. It looked too bad for the Hungarians but they staged a miraculous finish and by netting two in the last 45 seconds – Stefan Mitrovic’s shot just beat the buzzer – they managed to save this crucial game to a tie.

This draw was good news for the top two sides and they managed to grab the chance. Recco had no headaches in Moscow while Barceloneta was entangled to a surprisingly tough battle with Steaua. The Spaniards led only 8-7 after three periods but scored three connecting goals in the fourth to strengthen their second position.

For a while, Eger’s visit to Belgrade looked to offer the usual scenario against the bottom-ranked side as the Hungarians built a comfortable four-goal lead deep into the third period. But the young Serbs staged a great comeback and with 3:31 they went ahead at 11-10. Eger dug deep, however, and with 16 seconds to go, they scored the winner to keep their slim F8 hopes alive.

In Group B Jug offered perhaps its best spell in the season when they completely outplayed title-holder Olympiacos in the middle two periods for a 7-1 run which gave them their seventh win in as many matches.

BPM managed to gain another important triumph as they could come from behind once again, this time against Jadran. With a 2-0 last period, they edged out the Croats who fought bravely but couldn’t convert their last man-up.

Szolnok ended its miserable run by defeating Mladost with a fine performance. Though the Croats could come back from 6-1 to 7-6 that took its toll and Szolnok responded with three straight goals. With these three points, the 2017 champions can still eye an F8 berth, though the re-match in Zagreb will be decisive once more in two-week time.

The all-German clash turned into a one-sided contest as Spandau thrashed Hannover by six goals – it means that the F8 host is still without a win despite some encouraging draws with the top sides in the previous rounds.